Archaeological culture from the Pontic steppe

The people of the Yamnaya culture were likely the result of a genetic admixture between the descendants of Eastern European Hunter-Gatherers (EHG)[a] and people related to hunter-gatherers from the Caucasus (CHG),[4] an ancestral component which is often named "Steppe ancestry", with additional admixture of up to 18% from Early European Farmers.[5] Their material culture was very similar to the Afanasevo culture, and the populations of both cultures are genetically indistinguishable.[1] They lived primarily as nomads, with a chiefdom system and wheeled carts and wagons that allowed them to manage large herds.

The people of the Yamnaya culture are also closely connected to Final Neolithic cultures, which later spread throughout Europe and Central Asia, especially the Corded Ware people and the Bell Beaker culture, as well as the peoples of the Sintashta, Andronovo, and Srubnaya cultures. Back migration from Corded Ware also contributed to Sintashta and Andronovo.[6] In these groups, several aspects of the Yamnaya culture are present.[b] Genetic studies have also indicated that these populations derived large parts of their ancestry from the steppes.[1][7][8][9] Largest expansion of the Yamnaya culture. Ca. 3500 origins of Usatovo culture; 3400 origins of Yamnaya; c. 3400–3200 expansion of Yamnaya across the Pontic-Caspian steppe; c. 3000 end of Tripolye culture, and transformation of Yamnaya into Corded Ware in the contact zone east of the Carpathian mountains; 3100–2600 Yamnaya expansion into the Danube Valley.[10][11][12]

According to Pavel Dolukhanov (1996) the emergence of the Pit-Grave culture represents a social development of various local Bronze Age cultures, representing "an expression of social stratification and the emergence of chiefdom-type nomadic social structures", which in turn intensified inter-group contacts between essentially heterogeneous social groups.[13]

According to Anthony (2007), the Yamnaya culture (3300–2600 BC) originated in the Don–Volga area at ca. 3400 BC,[19][3] preceded by the middle Volga-based Khvalynsk culture and the Don-based Repin culture (c. 3950–3300 BC),[16][3] arguing that late pottery from these two cultures can barely be distinguished from early Yamnaya pottery.[20] Earlier continuity from eneolithic but largely hunter-gatherer Samara culture and influences from the more agricultural Dnieper–Donets II are apparent.

The Yamnaya (Pit-grave) culture was succeeded in its western range by the Catacomb culture (2800–2200 BC); in the east, by the Poltavka culture (2700–2100 BC) at the middle Volga. These two cultures were followed by the Srubnaya culture (18th–12th century BC). The Yamnaya culture was semi-nomadic, with some agriculture practiced near rivers, and a few fortified sites, the largest of which is Mikhaylovka.[26]

Characteristic for the culture are the burials in pit graves under kurgans (tumuli), often accompanied with animal offerings. Some graves contain large anthropomorphic stelae, with carved human heads, arms, hands, belts, and weapons.[27] The dead bodies were placed in a supine position with bent knees and covered in ochre. Some kurgans contained "stratified sequences of graves".[28] It has been argued that kurgan burials were rare, and reserved for special adults, who were predominantly, but not necessarily, male.[29] Status and gender are marked by grave goods and position, and in some areas, elite individuals are buried with complete wooden wagons.[30] Grave goods are more common in eastern Yamnaya burials, which are also characterized by a higher proportion of male burials and more male-centred rituals than western areas.[31]

In the northern Pontic steppes were excavated the oldest wheels in the world, which may tentatively be associated with the Indo-Europeans.[32] The Yamnaya culture had and used two-wheeled carts and four-wheeled wagons, which are thought to have been oxen-drawn at this time, and there is evidence that they rode horses.[33]

Metallurgists and other craftsmen are given a special status in Yamnaya society, and metal objects are sometimes found in large quantities in elite graves. New metalworking technologies and weapon designs are used.[30]

Anthony[34] speculates that the Yamnaya ate a diet consisting of meat, milk, yogurt, cheese, and soups made from seeds and wild vegetables, and probably consumed mead.

Mallory and Adams suggest that Yamnaya society may have had a tripartite structure of three differentiated social classes, although the evidence available does not demonstrate the existence of specific classes such as priests, warriors, and farmers.[35] 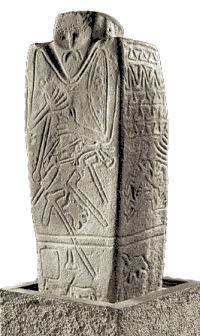 According to Jones et al. (2015) and Haak et al. (2015), autosomal tests indicate that the Yamnaya people were the result of a genetic admixture between two different hunter-gatherer populations: distinctive "Eastern Hunter-Gatherers" (EHG), from Eastern Europe, with high affinity to the Mal'ta–Buret' culture or other, closely related people from Siberia[7] and a population of "Caucasus hunter-gatherers" (CHG) who probably arrived from the Caucasus[36][4] or Iran.[37] Each of those two populations contributed about half the Yamnaya DNA.[8][4] This admixture is referred to in archaeogenetics as Western Steppe Herder (WSH) ancestry.

Admixture between EHGs and CHGs is believed to have occurred on the eastern Pontic-Caspian steppe starting around 5,000 BC, while admixture with Early European Farmers (EEF) happened in the southern parts of the Pontic-Caspian steppe sometime later. As Yamnaya Y-DNA is exclusively of the EHG and WHG type, displaying genetic continuity from the paternal lineages of the Dnieper-Donets culture, the admixture appears to have occurred predominantly between EHG males, and CHG and EEF females.

It has been hypothesized that an allele associated with lactase persistence (conferring lactose tolerance into adulthood) was brought to Europe from the steppe by Yamnaya-related migrations.[40][41][42][43]

People of the Yamnaya culture are believed to have had mostly brown eye colour, light to intermediate skin, and brown hair colour, with some variation.[44][45] Some individuals are believed to have carried a mutation to the KITLG gene associated with blond hair, as several individuals with Steppe ancestry are later found to carry this mutation. The Ancient North Eurasian population, who contributed significant ancestry to Western Steppe Herders, are believed to be the source of this mutation.[46] A study in 2015 found that Yamnaya had the highest ever calculated genetic selection for height of any of the ancient populations tested.[47][48]

The geneticist David Reich has argued that the genetic data supports the likelihood that the people of the Yamnaya culture were a "single, genetically coherent group" who were responsible for spreading many Indo-European languages.[49] Reich also argues that the genetic evidence shows that Yamnaya society was an oligarchy dominated by a small number of elite males.[50]

According to David W. Anthony, the genetic evidence suggests that the leading clans of the Yamnaya were of EHG (Eastern European hunter-gatherer) and WHG (Western European hunter-gatherer) paternal origin[56] and implies that the Indo-European languages were the result of "a dominant language spoken by EHGs that absorbed Caucasus-like elements in phonology, morphology, and lexicon."[57]

Haak et al. (2015) conducted a genome-wide study of 69 ancient skeletons from Europe and Russia. They concluded that Yamnaya autosomal characteristics are very close to the Corded Ware culture people, with an estimated 73% ancestral contribution from the Yamnaya DNA in the DNA of Corded Ware skeletons from Germany. The same study estimated a (38.8–50.4 %) ancestral contribution of the Yamnaya in the DNA of modern Central, and Northern Europeans, and an 18.5–32.6 % contribution in modern Southern Europeans; this contribution is found to a lesser extent in Sardinians (2.4–7.1 %) and Sicilians (5.9–11.6 %).[60][54][9] Haak et al. also note that their results state that haplogroup R-M269 spread into Europe from the East after 3000 BC.[61] Studies that analysed ancient human remains in Ireland and Portugal support the thesis that R-M269 was introduced in these places along with autosomal DNA from the Eastern European steppes.[62][63]

Autosomal tests also indicate that the Yamnaya are the most likely vector for "Ancient North Eurasian" admixture into Europe.[7] "Ancient North Eurasian" is the name given in literature to a genetic component that represents descent from the people of the Mal'ta–Buret' culture[7] or a population closely related to them. That genetic component is visible in tests of the Yamnaya people[7] as well as modern-day Europeans, but not of Europeans predating the Bronze Age.[64]

According to Allentoft (2015), the Sintashta culture probably derived from the Corded Ware Culture.

In the Baltic, Jones et al. (2017) found that the Neolithic transition – the passage from a hunter-gatherer economy to a farming-based economy – coincided with the arrival en masse of individuals with Yamnaya-like ancestry. This is different from what happened in Western and Southern Europe, where the Neolithic transition was caused by a population that came from Anatolia, with Pontic steppe ancestry being detected from only the late Neolithic onward.[65] Map of the approximate maximal extent of the Andronovo culture. The formative Sintashta-Petrovka culture is shown in darker red. The location of the earliest spoke-wheeled chariot finds is indicated in purple. Adjacent and overlapping cultures (Afanasevo, Srubna, Bactria-Margiana Culture are shown in green. Studies also point to the strong presence of Yamnaya descent in the current nations of South Asia, especially in groups that are referred to as Indo-Aryans.[59][67] According to Pathak et al. (2018), the "North-Western Indian & Pakistani" populations (PNWI) showed significant Middle-Late Bronze Age Steppe (Steppe_MLBA) ancestry along with Yamnaya Early-Middle Bronze Age (Steppe_EMBA) ancestry, but the Indo-Europeans of Gangetic Plains and Dravidian people only showed significant Yamnaya (Steppe_EMBA) ancestry and no Steppe_MLBA. The study also noted that ancient south Asian samples had significantly higher Steppe_MLBA than Steppe_EMBA (or Yamnaya). The study identified the Rors as the population in South Asia with the highest proportion of Steppe ancestry.[67] Lazaridis et al. (2016) estimated (6.5–50.2 %) steppe-related admixture in South Asians, though the proportion of Steppe ancestry varies widely across ethnic groups.[37][d] According to Narasimhan et al. (2019), the Yamnaya-related ancestry, termed Western_Steppe_EMBA, that reached central and south Asia was not the initial expansion from the steppe to the east, but a secondary expansion that involved a group possessing ~67% Western_Steppe_EMBA ancestry and ~33% ancestry from the European cline. This group included people similar to that of Corded Ware, Srubnaya, Petrovka, and Sintashta. Moving further east in the central steppe, it acquired ~9% ancestry from a group of people that possessed West Siberian Hunter Gatherer ancestry, thus forming the Central Steppe MLBA cluster, which is the primary source of steppe ancestry in South Asia, contributing up to 30% of the ancestry of the modern groups in the region.[59]

According to Unterländer et al. (2017), all Iron Age Scythian Steppe nomads can best be described as a mixture of Yamnaya-related ancestry and an East Asian-related component, which most closely corresponds to the modern North Siberian Nganasan people of the lower Yenisey River, to varying degrees, but generally higher among Eastern Scythians, while Bronze Age Steppe nomads of Central Asia had the East Asian-related component at only trace levels.[68]