An advanced persistent threat (APT) is a stealthy threat actor, typically a nation state or state-sponsored group, which gains unauthorized access to a computer network and remains undetected for an extended period.[1][2] In recent times, the term may also refer to non-state-sponsored groups conducting large-scale targeted intrusions for specific goals.[3]

Such threat actors' motivations are typically political or economic.[4] Every major business sector has recorded instances of cyberattacks by advanced actors with specific goals, whether to steal, spy, or disrupt. These targeted sectors include government, defense, financial services, legal services, industrial, telecoms, consumer goods and many more.[5][6][7] Some groups utilize traditional espionage vectors, including social engineering, human intelligence and infiltration to gain access to a physical location to enable network attacks. The purpose of these attacks is to install custom malware (malicious software).[8]

The median "dwell-time", the time an APT attack goes undetected, differs widely between regions. FireEye reported the mean dwell-time for 2018 in the Americas as 71 days, EMEA as 177 days, and APAC as 204 days.[5] Such a long dwell-time allows attackers a significant amount of time to go through the attack cycle, propagate, and achieve their objective.

Definitions of precisely what an APT is can vary, but can be summarized by their named requirements below:

Warnings against targeted, socially-engineered emails dropping trojans to exfiltrate sensitive information were published by UK and US CERT organisations in 2005. This method was used throughout the early 1990s and does not in itself constitute an APT. The term "advanced persistent threat" has been cited as originating from the United States Air Force in 2006[12] with Colonel Greg Rattray cited as the individual who coined the term.[13]

The Stuxnet computer worm, which targeted the computer hardware of Iran's nuclear program, is one example of an APT attack. In this case, the Iranian government might consider the Stuxnet creators to be an advanced persistent threat.[citation needed][14]

Within the computer security community, and increasingly within the media, the term is almost always used in reference to a long-term pattern of sophisticated computer network exploitation aimed at governments, companies, and political activists, and by extension, also to ascribe the A, P and T attributes to the groups behind these attacks.[15] Advanced persistent threat (APT) as a term may be shifting focus to computer-based hacking due to the rising number of occurrences. PC World reported an 81 percent increase from 2010 to 2011 of particularly advanced targeted computer attacks.[16]

Actors in many countries have used cyberspace as a means to gather intelligence on individuals and groups of individuals of interest.[17][18][19] The United States Cyber Command is tasked with coordinating the US military's offensive and defensive cyber operations.[20]

Numerous sources have alleged that some APT groups are affiliated with, or are agents of, governments of sovereign states.[21][22][23] Businesses holding a large quantity of personally identifiable information are at high risk of being targeted by advanced persistent threats, including:[24]

A Bell Canada study provided deep research into the anatomy of APTs and uncovered widespread presence in Canadian government and critical infrastructure. Attribution was established to Chinese and Russian actors.[27] 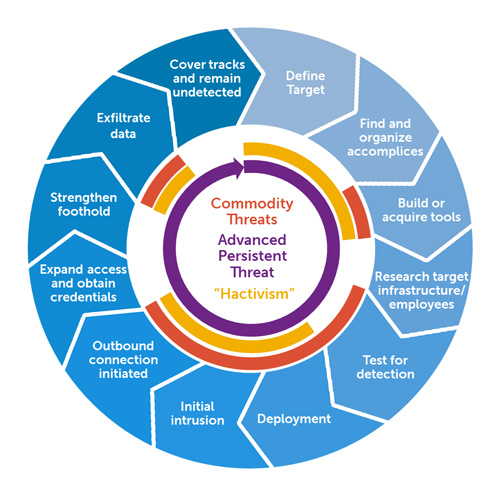 The global landscape of APT's from all sources is sometimes referred to in the singular as "the" APT, as are references to the actor behind a specific incident or series of incidents, but the definition of APT includes both actor and method.[29]

In 2013, Mandiant presented results of their research on alleged Chinese attacks using APT method between 2004 and 2013[30] that followed similar lifecycle:

In incidents analysed by Mandiant, the average period over which the attackers controlled the victim's network was one year, with longest – almost five years.[30] The infiltrations were allegedly performed by Shanghai-based Unit 61398 of People's Liberation Army. Chinese officials have denied any involvement in these attacks.[31]

There are tens of millions of malware variations,[33] which makes it extremely challenging to protect organizations from APT. While APT activities are stealthy and hard to detect, the command and control network traffic associated with APT can be detected at the network layer level with sophisticated methods. Deep log analyses and log correlation from various sources is of limited usefulness in detecting APT activities. It is challenging to separate noises from legitimate traffic. Traditional security technology and methods have been ineffective in detecting or mitigating APTs.[34] Active cyber defense has yielded greater efficacy in detecting and prosecuting APTs (find, fix, finish) when applying cyber threat intelligence to hunt and adversary pursuit activities.[35][36] Human-Introduced Cyber Vulnerabilities (HICV) are a weak cyber link that are neither well understood nor mitigated, constituting a significant attack vector.[37]

Since Xi Jinping became General Secretary of the Chinese Communist Party in 2012, the Ministry of State Security gained more responsibility over cyberespionage vis-à-vis the People's Liberation Army, and currently oversees various APT groups.[38] According to security researcher Timo Steffens "The APT landscape in China is run in a 'whole country' approach, leveraging skills from universities, individual, and private and public sectors."[39]