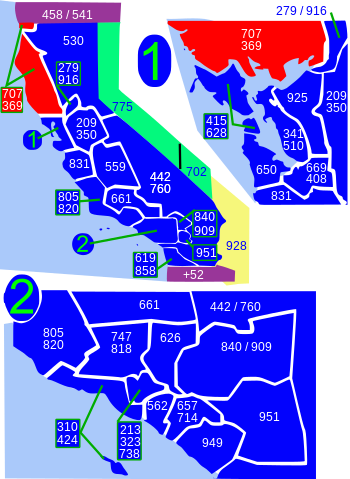 Area code 707 is a telephone area code in the North American Numbering Plan (NANP) for the northwestern part of the U.S. state of California. It was created by a split of area code 415 on March 1, 1959. It serves part of the northern San Francisco Bay Area, as well as the North Coast. Major cities in the area code include Napa, Sebastopol, Vallejo, Benicia, Fairfield, Santa Rosa, Windsor, Healdsburg, Rohnert Park, Petaluma, Fort Bragg, Rio Vista, Crescent City, Eureka, Clearlake, Vacaville, Dixon, and Ukiah.

When the North American Numbering Plan was created by AT&T in 1947, the far northern part of California received area code 916, with the exclusion of the city of Sacramento, which used area code 415. California area codes were reorganized geographically in 1950, so that 916 was assigned to a numbering plan area that comprised only the northeastern part from the Sierra Nevada to the Central Valley. The coastal area to the west was assigned area code 415. With this change, Sacramento was also changed to area code 916.

It is not only the only one of these area codes never to have required relief, but it is also the only one of California's thirteen original-format area codes (i.e., area codes with a 0 or 1 as their middle digit, the others being 310, 510, 818 and 909, all of which, in addition to 619, were introduced decades after 707's debut) not to require relief from a "new format" area code (those with 2–8 as their middle digit, which were introduced beginning in 1995 when the NANP ran out of the original format NPAs), despite explosive growth in the area, particularly its southern portion, as well as the proliferation of cell phones and pagers.

In 1999, a three-way, two-phase split of the area code 707 was scheduled by Pacific Bell,[1] such that a new area code (627) would have served most of Napa and Sonoma Counties and small portions of Marin and Mendocino Counties, while another new area code (369) would have served Solano County, as well as a small portion of Napa County, beginning in December 2000 and October 2001, respectively. However, due to the success of number pooling in preserving numbering resources, the California Public Utilities Commission cancelled these actions on July 27, 2000.

Prior to October 2021, area code 707 had telephone numbers assigned for the central office code 988. In 2020, 988 was designated nationwide as a dialing code for the National Suicide Prevention Lifeline, which created a conflict for exchanges that permit seven-digit dialing. This area code was therefore scheduled to transition to ten-digit dialing by October 24, 2021.[2]