Type of body slam used in professional wrestling
This article needs additional citations for verification. Please help improve this article by adding citations to reliable sources. Unsourced material may be challenged and removed.Find sources: "Chokeslam" – news · newspapers · books · scholar · JSTOR (June 2016) (Learn how and when to remove this template message)

A chokeslam is a type of body slam in professional wrestling, in which a wrestler grasps an opponent's neck, lifts them up, and slams them to the mat. It is common in televised wrestling because it is simple and relatively safe, yet looks powerful on camera. The chokeslam is typically used as a finisher by large wrestlers, further enhancing its perception as a powerful maneuver. This maneuver can be more damaging if the victim is slammed into an object, such as a table, steel chair, or garbage can. It is a common move performed by taller and bigger wrestlers.

The most common variety of chokeslam is performed with a single-handed choke. The wrestler places their free hand behind the opponent's back or hooks the trunks to help turn them horizontally for the throw. Although a chokeslam begins with a "choke", it is not usually considered to be an illegal move. The single arm choke that normally precedes a chokeslam is known as a goozle.

The chokeslam was innovated by Paul Heyman for use by the wrestler 911,[1] though one of the earliest accounts of the move dates back to a 19th-century recounting that describes Abraham Lincoln (himself a wrestler in his youth) using a technique vaguely similar in description, but without any specific mention of the "slam" component.[2] It is often used by large, powerful wrestlers such as The Undertaker, Kane, Big Show, Abyss, The Great Khali, Vader and Braun Strowman. This is because a larger, taller wrestler will be able to deliver a much higher, more impressive chokeslam than most smaller wrestlers. Their height and/or larger frames can also give them extra time to correct a botch if something goes wrong. However, some smaller wrestlers and even female performers have used the chokeslam, including Lacey Von Erich and The Hurricane, among others.

In this elevated chokeslam, innovated by Akira Taue, the wrestler stands behind the opponent, puts their head under one of the opponent's arms, and lifts them onto their shoulder. The wrestler then pushes the opponent upwards, turns 180°, and grabs hold of the falling enemy's throat, driving them down to the mat back first.

In this Chokeslam Variant, A wrestler has their opponent held in a Fireman's Carry position. After this, they then transition into a chokeslam. This move is sometimes used by large superstars, but is occasionally used by some smaller superstars. Shane Haste/Shane Thorne has used this move as a finisher during his time in NOAH and NJPW, calling this move "Bomb Valley Death".

Like the vertical suplex chokeslam, but in this variant, the attacking wrestler puts the opponent in a powerbomb position and lifts them up in an inverted powerbomb. The wrestler moves their arm from around the opponent's neck, grabbing hold of their throat. The wrestler then slams the opponent down to the mat back first.

Also known as a leg hook chokeslam, or the Sky High Chokeslam, as dubbed by Vader, the attacker starts out by lifting the opponent's left or right leg off the ground and tucks it under or hooks it over their arm while using their free hand to grab the opponent's neck. Then, the attacker lifts the opponent into the air and slams the opponent down to the mat. The move can also be used as a reversal from when the opponent tries some form of kick only to have the attacker catch and hold on to the leg, setting up the move from there. A sitting version and a kneeling version are also possible. 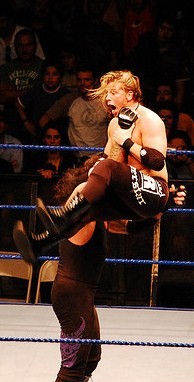 The Undertaker performing a one-handed chokeslam on Curt Hawkins

A very common variation, usually performed by a larger wrestler to a smaller one, this move sees the usual execution of the chokeslam done with just one hand lifted from the throat without the support of the other hand that usually goes on the back. Big Show, Kane, and The Undertaker frequently perform this. Big Show invented the kneeling chokeslam during his time in WCW under the name The Giant from 1995-1999.

This variation sees the wrestler stand behind the opponent, slightly to their side, then lift them up by their throat before slamming them face-first.

This variation of a chokeslam is similar to an ordinary chokeslam, however, instead of the wrestler remaining standing, the wrestler falls into a seated position while forcing the opponent back-first into the mat. Damian Priest uses this move as his signature move, calling it South of Heaven.

This move sees a wrestler first grasp an opponent's neck with both hands, then lift them up and choke them before throwing the opponent back down to the mat, usually after choking out the opponent. A falling version of this move can see the attacking wrestler fall forward to the mat while keeping their arms extended, but will more often see the wrestler fall into a seated position or a kneeling position. It's mainly used by Tensai and The Great Khali.