A powerslam is a professional wrestling body slam move in which the wrestler performing the slam falls face-down on top of the opponent. The use of the term "powerslam" usually refers to the front powerslam or the scoop powerslam.

The wrestler lifts the opponent up on their right shoulder, as in a front powerslam. Then, the left arm is wrapped around the opponent's neck and the right arm around the opponent's torso. The wrestler then sits down while dropping the opponent vertically to the right side, driving the opponent neck- and shoulder- first into the mat. The move was innovated by Mitsuharu Misawa and is technically known as a sitout side powerslam. Another variation is the elevated position: the wrestler puts the opponent into a front powerslam, then jumps off either the second or third turnbuckle, driving the opponent into a typical Emerald Flowsion position. WWE wrestler Samoa Joe used this move, calling it the Island Driver. Tetsuya Naito innovated a variation of the move, where the Emerald Flowsion is preceded by a lifting hammerlock cradle hold, dubbed Gloriá. Naomichi Marufuji invented a Double Underhook Variation, called Tiger Flowsion.

This move is also known as a falling slam or a reverse fallaway slam. Facing the opponent, the wrestler reaches between the opponent's legs with one arm and reaches around their back from the same side with the other arm. The wrestler lifts the opponent up so they are horizontal across the wrestler's body, then falls forward to slam the opponent against the mat back-first. Although not usually used as a finishing maneuver by most other competitors, Mark Henry uses the falling powerslam as his ending maneuver and refers to it as the World's Strongest Slam, playing off his claim to be the world's strongest man. An inverted version exists, where the opponent is lifted from behind and slammed in a manner similar to a falling slam, only on their face/abdomen. The Boogeyman uses the inverted version as a finisher calling it the Boogeyslam.

The wrestler lifts the opponent across their shoulders in a fireman's carry, grabs their right leg and pushes it up, and positions their torso across the wrestler's abdomen. The wrestler then falls forward, slamming the opponent down on their back in a front powerslam. It is used by Keith Lee as the Big Bang Catastrophe.

The most common powerslam variation, it is also often referred to simply as a "powerslam". The attacking wrestler reaches between an opponent's legs with their stronger arm and reaches around their back from the same side with their weaker arm before then lifting the opponent up over their shoulder. From this position, the wrestler falls forward to slam the opponent against the mat back-first. An inverted variation of this maneuver also exists. Wrestlers often run forward as they slam, a move popularized by The British Bulldog who used it as his finishing move. Braun Strowman and Davey Boy Smith Jr. are modern examples of wrestlers using the running powerslam as a finisher.

The move, also known as a military press powerslam or falling press slam, is similar to a gorilla press slam. The wrestler lifts the opponent up over their head with arms fully extended (as in the military press used in weight lifting), drops the opponent into an over-the shoulder-position, then runs and falls forward to slam the opponent against the mat back-first. Currently being used by NXT rookie Bron Breakker.

This move is the second most common version of a powerslam and is often referred to as simply a "powerslam". The attacking wrestler places their stronger arm between an opponent's legs, and reach over the opponent's shoulder with their weaker arm. Then, the opponent is spun over onto their back while keeping the opponent horizontal across the wrestler's body at all times. As the opponent falls to the mat, the attacking wrestler will continue to fall face-down on top of them in a lateral press pinning position. This powerslam is usually performed on a charging opponent, using the opponent's own momentum to power the throw. Notable users of this move are Road Warrior Animal, Randy Orton, Samoa Joe and Braun Strowman. An inverted version exists, where the opponent is lifted from behind, and slammed in a manner similar to a scoop powerslam, only onto their face/abdomen. Jeff Cobb uses a variation, where he spins him and his opponents a 360°, before executing the powerslam, dubbed as the Tour of the Islands. Former NXT rookie and Nexus member Michael Tarver also used a reverse spin scoop powerslam, similar to the "Tour of the Islands", but he calls it "Tarver's Lightning". The Rock performing the Rock Bottom (side slam) on Daniel Bryan.

This move is commonly referred to as an ura-nage slam, or simply ura-nage. This name is an incorrect Americanization of the name for ura-nage, which, translated directly from Japanese, means "throw to behind". It has erroneously been translated as "reverse side throw".[1] To perform it, the wrestler begins standing face to face with the opponent slightly to their side. Then, the wrestler tucks their own head under the opponent's near arm, reaches across the opponent's chest and around their neck with their near arm, and places the other arm against their back. The wrestler then falls forward, either flat on their chest or into a kneeling position, and forces the opponent back-first onto the mat. In another variation, the wrestler can also stay standing and body slam the opponent onto the mat, this is typically called a standing side slam. The original version was innovated and popularized by Hiroshi Hase. The fall-forward variation was popularized by The Rock, who called it the Rock Bottom. The kneeling variation was performed by Booker T who calls it the Book End. Matt Hardy performs a sitout version of it, called the Side Effect. The sitout side slam was also performed by former WWE star Mason Ryan. Bryan Beal of Berkeley Heights Township performs a version called "The Beal Bomb". The very same slam made by The Rock was also used by The Angelo Crewz calling it the Angelo Slam (Running Side Slam). Becky Lynch uses this move with a pumphandle calling it The Manhandle Slam.

This move sees the wrestler stand behind the opponent, put their head under one of the opponent's arms, and lift the opponent into a belly-to-back suplex. The wrestler then pushes the opponent upwards before turning and transitioning into a side slam, so the opponent is dropped from an elevated position. The move is used as a finishing manoeuvre by Clark Connors, which he names the “Trophy Kill”.

This move is also referred to as a scrapbuster. To perform it, the wrestler stands in front of the opponent with the opponent facing the same direction. The wrestler lift the opponent in front of them in a side powerslam position. The wrestler swings the opponent's legs to the opposite side before sitting down and slamming the opponent's back to the mat. Used by Abyss as the Black Hole Slam. Jon Moxley and Wade Barrett use this as their signature maneuver calling it the Moxicity (Moxley) and the Winds of Change (Barrett). This version was also used by the late Brodie Lee as "Truckstop". A kneeling version was also used by the Big Boss Man.

This move is often erroneously described as a moonsault ura-nage slam. To perform it, an attacking wrestler stands slightly behind and facing the side of a standing opponent. The wrestler then reaches under the near arm of the opponent, across the chest of the opponent and under their far arm, while placing their other hand on the back of the opponent to hold them in place. The wrestler then performs a backwards somersault (moonsault) while holding the victim, driving the opponent into the mat back-first. This move can also be performed off the top rope and is known as a moonsault side slam or solo Spanish fly in reference to the Spanish fly double team move. The move was used by Paul Burchill and John Morrison, both of whom called the move C-4. A famous user of the Move is Will Ospreay, calling it the Rainham Maker. Current WWE wrestler Charlotte Flair also uses this move.

This move is also known as a sambo suplex or side suplex. To perform it, the wrestler stands face-to-face with the opponent, slightly to their side. The wrestler tucks their head under the opponent's near arm, and reaches across the opponent's chest and around their neck with their near arm. The wrestler then simultaneously lifts the opponent up, turns 180° and falls forward, slamming the opponent back-first on the mat. As mentioned below, the move was popularized by Hiroshi Hase.

The name uranage (or ura-nage) comes from a Judo throw which, translated directly from Japanese, means "throw to behind/back" and is commonly (albeit incorrectly) used to refer to a regular side slam in pro wrestling. The Judo uranage throw more closely resembles a saito suplex in execution.

In this elevated side slam variation, the wrestler grabs a front facelock on the opponent and wraps their arm over the opponent's neck. The wrestler then lifts the opponent upside down, as in a vertical suplex. The wrestler moves their arm from around the opponent's neck, and as the opponent falls back down, they are placed into a side slam position and dropped on the mat. This was formerly used by Hirooki Goto as Shouten, before using a sitout version called the Shouten Kai. He also invented the inverted variation called the Ura-Shouten. Former professional wrestler Matt Morgan used this move as a finisher during his tenure in TNA, calling it the Hellevator. 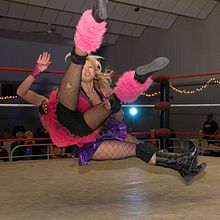