Apertural view of an adult shell of the queen conch Lobatus gigas, from Trinidad and Tobago Conch (/kɒŋk, kɒntʃ/)[1] is a common name of a number of different medium-to-large-sized sea snails. Conch shells typically have a high spire and a noticeable siphonal canal (in other words, the shell comes to a noticeable point at both ends).

In North America, a conch is often identified as a queen conch, indigenous to the waters of the Gulf of Mexico and Caribbean. Queen conches are valued for seafood and are also used as fish bait.[2]

The group of conches that are sometimes referred to as "true conches" are marine gastropod molluscs in the family Strombidae, specifically in the genus Strombus and other closely related genera. For example, Lobatus gigas, the queen conch, and Laevistrombus canarium, the dog conch, are true conches.

Many other species are also often called "conch", but are not at all closely related to the family Strombidae, including Melongena species (family Melongenidae) and the horse conch Triplofusus papillosus (family Fasciolariidae). Species commonly referred to as conches also include the sacred chank or shankha shell (Turbinella pyrum) and other Turbinella species in the family Turbinellidae. The Triton's trumpet (family Charoniidae) may also be fashioned into a horn and referred to as a conch.[citation needed]

A conch is a sea snail in the phylum Mollusca. A conch shell has superior strength[clarification needed] and is used as musical instrument or decoration. It consists of about 95% calcium carbonate and 5% organic matter. The conch meat is edible.[5][6]

The meat of conches is eaten raw in salads or cooked in burgers, chowders, fritters, and gumbos. All parts of the conch meat are edible.[6]

Conch is indigenous to the Bahamas and is typically served in fritter, salad, and soup forms. It is also eaten in the West Indies (in The Bahamas, Turks and Caicos, and Jamaica in particular[7]); locals in Jamaica eat conch in stews, curries and other dishes. Restaurants all over the islands serve this particular seafood. In the Dominican Republic, Grenada, and Haiti, conch is commonly eaten in curries or in a spicy soup. It is locally referred to as lambi. In Puerto Rico, conch is served as a ceviche, often called ensalada de carrucho (conch salad), consisting of raw conch marinated in lime juice, olive oil, vinegar, garlic, green peppers, and onions. It is also used to fill empanadas.

Conch is very popular in Italy and among Italian Americans. Called sconcigli, it is eaten in a variety of ways, but most often in salads or cooked in a sauce for pasta. It is often included as one of the dishes prepared for the Feast of the Seven Fishes.

In East Asian cuisines, conch is often cut into thin slices and then steamed or stir-fried.

Eighty percent of the queen conch meat in international trade is imported into the United States. The Florida Keys were a major source of queen conches until the 1970s, but the conches are now scarce and all harvesting of them in Florida waters is prohibited[8] and individuals who have harvested them have been punished by law enforcement.[9]

In the Turks and Caicos Islands, the Conch Festival is held in November each year at the Three Queens Bar/Restaurant in Blue Hills. Local restaurateurs compete for the best and most original conch dishes, which are then judged by international chefs. Other competitions, events, and music performances occur.[10]

Conch shells can be used as wind instruments. They are prepared by cutting a hole in the spire of the shell near the apex and then blowing into the shell as if it were a trumpet, as a blowing horn. Sometimes a mouthpiece is used, but some shell trumpets are blown without one. Pitch is adjusted by moving one's hand in and out of the aperture; the deeper the hand, the lower the note.

Various species of large marine gastropod shells can be turned into blowing shells, but some of the best-known species used are the sacred chank or shankha Turbinella pyrum, the Triton's trumpet Charonia tritonis, and the queen conch Strombus gigas.

One of the most famous musical instruments was found in Marsoulas cave the Pyrenees Mountains, in France in 1932. CT scans showed how ancient humans adapted the Concho to make it a musical instrument, such as creating a mouthpiece that was held together by an organic matter like clay or wax. Researchers from the University of Sorbonne, together with a professional horn player, were able to use it again as a musical instrument and play it.

Examples of this practice in the Americas can be seen in the form of historical artifacts at the Museo Larco in Lima, Peru, and Museo Nacional de Antropología in Mexico City, Mexico. Many kinds of molluscs can produce pearls. Pearls from the queen conch, S. gigas, are rare and have been collectors' items since Victorian times.[11] Conch pearls occur in a range of hues, including white, brown, and orange, with many intermediate shades, but pink is the color most associated with the conch pearl, such that these pearls are sometimes referred to simply as "pink pearls".[11] In some gemological texts, non-nacreous gastropod pearls used to be referred to as "calcareous concretions" because they were porcellaneous (shiny and ceramic-like in appearance), rather than nacreous (with a pearly luster). The Gemological Institute of America and World Jewellery Confederation now use the simple term "pearl"—or, where appropriate, the more-descriptive term "non-nacreous pearl"—for such items,[12] and, under Federal Trade Commission rules, various mollusk pearls may be referred to as "pearls" without qualification.[13]

Although not nacreous, the surfaces of fine conch pearls have a unique and attractive appearance of their own. The microstructure of conch pearls comprises partly aligned bundles of microcrystalline fibers that create a shimmering, slightly iridescent effect known as flame structure. The effect is a form of chatoyancy, caused by the interaction of light rays with the microcrystals in the pearl's surface, and it somewhat resembles moiré silk. 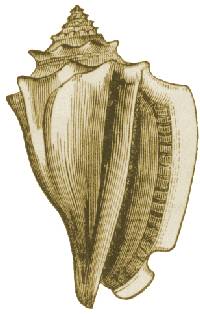 A drawing of the shell of Strombus alatus, the Florida fighting conch

The Moche people of ancient Peru worshipped the sea and often depicted conch shells in their art.[29]

Quetzalcoatl, the Mexican god of wind and learning, wears around his neck the "wind breastplate" ehecailacocozcatl, "the spirally voluted wind jewel" made of a conch shell. Blowing a conch was considered a religious act.[30]

Buddhism has also incorporated the conch shell, Turbinella pyrum, as one of the Eight Auspicious Symbols.[citation needed]

A shankha shell (the shell of a T. pyrum, a species in the gastropod family Turbinellidae) is often referred to in the West as a conch shell or a chank shell. This shell is used as an important ritual object in Hinduism. The shell is used as a ceremonial trumpet, as part of religious practices, for example puja. The chank trumpet is sounded during worship at specific points, accompanied by ceremonial bells and singing. As it is an auspicious instrument, it is of purity and brilliance (Om, Devas, Brahman the Almighty Supreme creator, referred to in mantras, the Gayatri mantra explains a meditation on the brilliance of the sun), it is often played in a Lakshmi puja in temple or at home.

In the story of Dhruva, the divine conch plays a special part. The warriors of ancient India blew conch shells to announce battle, as is described in the beginning of the war of Kurukshetra, in the Hindu epic the Mahabharata.

The god of preservation, Vishnu, is said to hold a special conch, Panchajanya, that represents life, as it has come out of life-giving waters. According to Hindu mythology, Devas (gods) and Asuras (demons) once decided to churn the ocean to get a special divine nectar. This divine nectar, also known as amrit, was known to give immortality to whomever drank it. All the gods were on one side of it and the demons were on the other end. The churning (samudra manthan) produced a number of things from the ocean. One of the first things to come out of it was lethal poison called halahala. Everyone was terrified, as the poison was potent enough to destroy entire creation, so they went to Lord Shiva for protection and he consumed the poison to safeguard the universe. Lord Shiva took the poison in his mouth, but did not swallow it. Shankha also was one of divine objects that was obtained from samudra manthan.[citation needed]

Also, the sound of the conch is believed to drive away the evil spirits.[citation needed]

The blowing of the conch or "the shankha" needs a tremendous power and respiratory capacity. Hence, blowing it daily helps keep the lungs healthy.[citation needed]

A newlywed Bengali bride wears bangles called shakha paula, made from coral and conch-shell powder. They have been a part of Bengali custom and tradition. In an ancient era, the Bengali farming community is thought to have resided near the river. They collected conch shells and powdered them to create bangles. They also used red coral for the bangles. They gave these beautiful bangles to their wives, as they could not afford ivory bangles. They were also known as poor-man's ivory, as they were cheap substitute for ivory bangles.[19]

Literature and the oral tradition

This article appears to contain trivial, minor, or unrelated references to popular culture. Please reorganize this content to explain the subject's impact on popular culture, providing citations to reliable, secondary sources, rather than simply listing appearances. Unsourced material may be challenged and removed. (May 2020)

Wikibooks Cookbook has a recipe/module on
Edible mollusks
Categories
Categories: