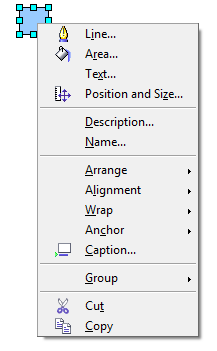 A context menu from OpenOffice.org Writer, appearing when the user right-clicks on a page element

A context menu (also called contextual, shortcut, and pop up or pop-up menu) is a menu in a graphical user interface (GUI) that appears upon user interaction, such as a right-click mouse operation. A context menu offers a limited set of choices that are available in the current state, or context, of the operating system or application to which the menu belongs. Usually the available choices are actions related to the selected object. From a technical point of view, such a context menu is a graphical control element.

Context menus first appeared in the Smalltalk environment on the Xerox Alto computer, where they were called pop-up menus; they were invented by Dan Ingalls in the mid-1970s.[1][2]

Windows mouse click behavior is such that the context menu doesn't open while the mouse button is pressed, but only opens the menu when the button is released, so the user has to click again to select a context menu item. This behavior differs from that of macOS and most free software GUIs.

Context menus are sometimes hierarchically organized, allowing navigation through different levels of the menu structure. The implementations differ: Microsoft Word was one of the first applications to only show sub-entries of some menu entries after clicking an arrow icon on the context menu, otherwise executing an action associated with the parent entry. This makes it possible to quickly repeat an action with the parameters of the previous execution, and to better separate options from actions.

Context menus have received some criticism from usability analysts when improperly used, as some applications make certain features only available in context menus, which may confuse even experienced users (especially when the context menus can only be activated in a limited area of the application's client window).

Context menus usually open in a fixed position under the pointer, but when the pointer is near a screen edge the menu will be displaced - thus reducing consistency and impeding use of muscle memory. If the context menu is being triggered by keyboard, such as by using Shift + F10, the context menu appears near the focused widget instead of the position of the pointer, to save recognition efforts.

Look up context menu in Wiktionary, the free dictionary.