The Emerald Empress is the name of several, fictional super-villains appearing American comic books published by DC Comics. The characters associated with the name name are often portrayed as a prominent adversary of the Legion of Super-Heroes. The first incarnation of the character appeared in Adventure Comics #352 (January 1967).[1]

The first and mainstream version of the character is Sarya of Venegar, whom discovered the Emerald Eye of Ekron and was corrupted by the artifact, awakening the evil dormant within the young woman and making her a conqueror. Sarya turned to a life of piracy and began to gain a following before later founding the Fatal Five and becoming an enemy of the Legion of Super-Heroes. The second incarnation of the character, Cera Kesh, is instead portrayed as a teenaged fan of the Legion of Super-Heroes whom auditioned to be a part of the team, only to be turned away and mocked for her overweight and unattractive appearance. Sensing her anger and jealousy, the Emerald Eye of Ekron corrupts her into the second Emerald Empress, granting her both powers and the ability to become an idealized version of herself. The third incarnation of the character, Falyce, is a native of the planet Orando and victim of the planet's duke. Wishing for the power to slay her torturer, the Emerald Eye of Ekron makes the third Emerald Empress but drives her insane.

Sarya of the planet Venegar (referred to simply as 'the Empress') was recruited by Superboy and the Legion to combat the menace of the Sun-Eater. Once the Sun-Eater was defeated, she joined the Fatal Five with Tharok, Validus, Mano and the Persuader.[2]

The Empress had no innate super-powers; rather, she employed a powerful mystical item called the Emerald Eye of Ekron, an approximately 2' diameter sphere that obeyed her mental commands.[3] The Eye could fly and emit blasts of energy, and allowed the Empress to fly as well as survive in space. The Eye's residual energy also gave her, on at least one occasion, super-strength. It caused her to grow to gigantic stature during one battle. The Eye could also reform itself if shattered. The Eye is an item of immense power; it defeated Superboy (who is susceptible to magic generally) more than once, though it seemed to have more trouble with Mon-El, perhaps because he was immune to green Kryptonite and its blasts may have contained elements of it. Despite this, for unknown reasons, the Eye does not like green Kryptonite, and being exposed to a chunk of it has made the Eye flee on more than one occasion (leaving the Empress behind temporarily).

The Emerald Empress died when, at her request, Legionnaire Sensor Girl used her powers of illusion to mask Sarya's presence from the Emerald Eye of Ekron. As the Empress' body quickly withered and decomposed, she expressed relief to be free from the Eye's control, indicating both that their symbiotic relationship was unwilling and that the Empress was far older than she appeared.[4]

Emerald Empress alongside the other Fatal Five members, was among the supervillains in Superboy-Prime's Legion of Super-Villains.

The Emerald Empress appears as one of Max Lord's super villains in Justice League vs. Suicide Squad. Empress was part of the first Suicide Squad, along with Lobo, Johnny Sorrow, Rustam and Doctor Polaris. The Empress was manipulated by Amanda Waller by potential information about Saturn Girl. When the first mission ended in disaster, Empress and the others were imprisoned. They were later freed by Maxwell Lord as part of his own plan for domination. Empress escaped this multi-layered plan, with her eye severely damaged. This endangered her plan to stay in the current time. Realizing she might need help, she pondered recruiting four other allies.[5]

Slightly overweight and with poor skin, she was also telekinetic and sought to join the Legion through their open audition program. Mocked by Legion member Inferno (for whom she harbored an infatuation) for her appearance, Kesh fled in embarrassment and anger, and was found by the Emerald Eye. Transformed by it into an idealized version of herself, and with all the powers of the Eye boosting her own, she succumbed to the Eye's influence and turned to a life of crime with the other members of the Fatal Five. At the same time, Leland McCauley found a second Emerald Eye, with which he hoped to turn Ingria Olav into the new Emerald Empress. Instead, Cera killed her and gained the power of both Eyes.

She was not seen again, as the timeline she was a part of ended shortly thereafter.

In Legion of Super-Heroes (vol. 6) Annual #1 (2011), the Eye finds a new Empress on the planet of Orando. This young girl fights Shrinking Violet, Light Lass, Sun Boy, Sensor Girl and Gates of the Legion before being defeated by Violet. The girl was released from the Eye's control, but the Eye itself managed to flee the planet. 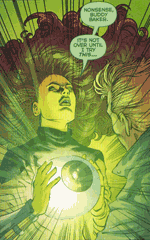 Starfire wielding the Emerald Eye in 52

According to the year-spanning maxiseries "52" (2006), the Eye was once a real eye for the cosmic entity called "Ekron".[6] But somehow Emerald Empress got the Eye and got it to work for her.[7][8]

In the present, the Emerald Eye has appeared in the pages of 52, in the possession of Lobo, and in The Brave and The Bold back in the hands of the Emerald Empress.

Lobo kept the item in a small chest under his supervision, unwilling to use its powers. When Starfire used the Eye to save the population of Sector 3500 from a swarm of strange creatures, Lobo revealed that he knew something about the origins of the Eye. An Emerald Head of Ekron also existed and was searching for its lost eyeball. Ekron is apparently a member of the Green Lantern Corps, but has been driven insane by the destruction of the Space Sector under his protection by Lady Styx. The Emerald Eye itself is later revealed as a precursor of the technology that later led to the power ring worn by all Green Lanterns, with less functionality but nevertheless a formidable weapon.

When the Eye was reintroduced in the Legion of Super-Heroes (vol. 6) Annual of 2011, none of this was acknowledged. Rather, Ekron was referred to as a world where the Eye had once been worshipped as a god. The 52 explanation also neglects any existence of the Eye wielded by Garryn Bek of L.E.G.I.O.N. in the 21st century.

The first incarnation of the Emerald Empress, Sarya, possessed limited independent abilities, possessing greater than average human strength, a trait possessed by inhabitants of Venagar. Much of her abilities are centered upon the Emerald Eye of Ekron, in which she controls through her own mind and willpower. Having a symbiotic relationship with the artifact, she draws power from it while the Eye draws focus and both are more powerful the closer they are.[9][10]

Powers through the Emerald Eye of Ekron

Each user of the Emerald Eye of Ekron gains access to its nearly unlimited levels of emerald/willpower energies (the same power source used by the Green Lantern Corps), making the artifact both indestructible and considered uncontainable. Due to its usage of the same willpower/emerald energy sources, it is considered related to the Oan's power battery used by the Green Lantern Corps.[9][10]

Its powers include granting its users the ability to fly and survive in the vacuum of space, generate protective force fields, project blasts strong enough to hurt Kryptonians, create energy constructs, hypnotize others, and teleport over short distances. It can also grant superhuman strength, size manipulation, cast illusions, alter reality, see through every spectrum and wavelength, instantly reform itself if shattered, enhance any innate skills that its current user has, and keep its user young and beautiful.

After the Zero Hour event and the subsequent reboot of the Legion's continuity, a character simply called the 'Empress' appeared, unconnected to the Emerald Eye of Ekron (which appeared separately later). Although she had no powers, she was as dangerous as the rest of the Fatal Five, being a sadistic murderess who had taught herself how to kill any known lifeform.

The Eye itself was in possession of the supervillain Scavenger, but was discovered by Shrinking Violet, who fell under its control. With the Legion's help, Violet managed to break the Eye's hold on her, but not before she had sent half the team into the past and attracted the attention of the ancient sorcerer Mordru.

Eventually, the Eye came into the hands of the Empress. The Empress seemed to have broken the Eye's will, leaving her unequivocally in control.

This version of the Legion is still in continuity, but now established as taking place on a parallel world, which means that this Eye is not the same as the one the original Legion encountered, but the Eye of an alternate universe.

Emerald Empress was ranked 38th in Comics Buyer's Guide's "100 Sexiest Women in Comics" list.[11] Russ Burlingame of Comicbook.com described her as "a big player in the DC Universe of late" and that "she's one of the most identifiable Legion villains, with a cool gimmick and a great visual" noting her appearance in Justice League vs. Suicide Squad and in a story that crossed Supergirl over with Batgirl.[12] Emerald Empress from the Legion of Super-Heroes