This article contains content that is written like an advertisement. Please help improve it by removing promotional content and inappropriate external links, and by adding encyclopedic content written from a neutral point of view. (June 2019) (Learn how and when to remove this template message) 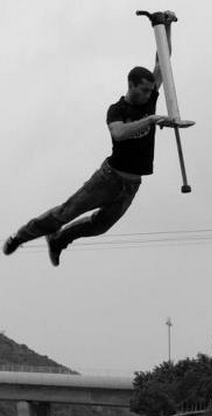 Extreme Pogo or Xpogo is an action sport which involves riding and performing tricks on specially designed "extreme" pogo sticks. These pogo sticks have the potential for jumping over 3 meters of height.[1] Xpogo can be seen in athlete exhibition teams,[2] Xpogo content on sites such as YouTube,[3] and the annual Pogopalooza: The Xpogo World Championship Series.[4]

Xpogo competitions have begun in countries outside of the US.[5] An Xpogo commercial was run by Nike during the 2012 Summer Olympics.[6] Xpogo athletes were included in the 2014 Rose Parade in Pasadena, California.[7] The vast majority of Xpogo athletes are male and between the ages of 10 and 25.[8]

The beginnings of Xpogo are little contested, but it is acknowledged among the Xpogo community that Dave Armstrong from Provo, Utah was likely the first individual in the 20th century to make a conscious and consistent effort to execute tricks on a traditional steel spring pogo stick, beginning in 1999.[9] Dave created a website named Xpogo.com, around that time to share pictures and video of his bouncing. Shortly after Armstrong, several other individuals began to independently form the idea of creating an extreme sport around pogo. Among these were Nick McClintock, Nick Ryan, Fred Grzybowski, Dan Brown, Rick Gorge, and Matt Malcolm. Each believing they had solely created the sport, the collective founders of Xpogo eventually connected via Xpogo.com.[10] Together they shared their tricks and associated media, effectively laying the groundwork for the sport. The first extreme pogo stick came out in 2004 that was able to carry the weight of an adult and reach heights of about 6ft.[citation needed] An extreme pogo exhibition in 2017.

From 2000 to 2004, pockets of Xpogo athletes began to emerge around the United States, and other countries such as the Netherlands, inspired by Xpogo.com.[11] During this time there were no Xpogo sticks, only traditional steel spring sticks that could be purchased at established retailers. Each pocket of jumpers took their own names and made associated websites to help define themselves against the larger Xpogo community. These groups included Team Xpogo, Team Hyper Pogo, Pogo Cult, Rittman Pogo, Grand Theft Pogo, Say No To Park, The Pogo Squad, from York, PA.[12]

As each of these groups developed and motivated other individuals around the country to begin bouncing as well, a core group of tricks were created that served as the building blocks for all trick innovation to come. A series of grabs, stalls, spins, and wraps utilizing the two foot pegs, two handlebars, and the frame of the pogo stick became the commonly executed tricks.[13] Simple descriptive names such as "One-Foot Peg Grab" or "Under The Leg Bar Spin" were used to describe some tricks, while others received more specialized names such as "Malcolm X" (180 no-foot peg grab) and "Candy Bar" (one leg between the handlebars while jumping).[14] Other tricks are related to BMX and skateboarding tricks such as "Can-Can" and "Heel Clicker."[11]

Prior to the advent of social media sites such as YouTube and Facebook, the majority of the communication and media sharing among extreme pogo enthusiasts occurred on Xpogo forums where, by 2004 there were 50–100 dedicated users and many more casual or “silent” users.[15] Due to the continued growth of the online community and the sport as a whole, member Dan Brown decided to hold an event called Pogopalooza, where some of the top individuals in the sport could come together in person and hold a miniature competition and exposition of the sport.[16] In the summer of 2004 Dan Brown hosted Pogopalooza 1 in a church parking lot in Nebraska where about seven members of the Xpogo community appeared.[17] While the event was small and only attracted friends and family, it set the precedent to hold an annual event bringing together extreme pogo athletes from around the US, and subsequently in other countries.[18]

2004 was the first year "extreme" pogo sticks were available.[19] Defined as being able to support riders of adult weights while carrying a height potential of 6+ feet, the first extreme pogo stick was the Flybar 1200, by S.B.I. Enterprises.[19] Instead of using a traditional steel spring, the Flybar utilized giant rubber “elastomers,” creating a bungee-like jumping sensation. The new height potential made possible by the Flybar allowed new tricks, noted most by the first full backflip on a pogo stick, by Brian “Chewy” Call in 2005.[20]

Shortly after the release of the Flybar, a company emerged in Southern California with the “MotoStik” pogo, which used a dual-spring technology with MotoX-style handlebars designed for cross-training.[21] The next extreme pogo stick, the Vurtego, was launched in 2006. This produced the greatest height of any stick to date along with the greatest durability.[22] In 2008 the BowGo, which had been in development since 2001 at Carnegie Mellon University, entered the fray.[23] Using a giant fiberglass bow on the front end of the pogo stick which flexed outward with downward pressure and snapped back in to produce upward momentum, the BowGo launched riders higher more consistently than any stick to date.[23] The TK8 pogo stick, another air compressed design launched in France and Andorra around 2010.[24] The top Xpogo US athletes worked in parallel with extreme pogo companies to help further development.[25]

The combination of the release of several extreme pogo sticks, along with the associated boom in creativity made possible by 6–9 ft. height potential, the surge in information sharing potential through social media, and the continued steady growth of Xpogo.com brought a new and robust definition to the sport of Xpogo.[18][11]

By 2009, the Xpogo community had grown into the hundreds with hundreds to potentially thousands more followers and fans globally.[26][27] Pogopalooza had occurred 4 additional times in 2005, 2006, 2007, and 2008, increasing in scope and attendance each year.[28] Pogopalooza 6, which was held in Pittsburgh, Pennsylvania, saw the biggest turnout of athletes yet, over 50+ from across the United States, Canada, and England and involved the whole of the City through four days of events and competition.[29]

After Pogopalooza 6, national media began to take note of extreme pogo in the biggest manner to date. The Wall Street Journal ran a front-page article on the sport and numerous other countrywide and even international publications began covering athletes, events, and the growth of Xpogo in general.[29] With the media push, more athletes began to emerge around the country and the globe, pushing trick innovation to new levels[30]

After a widely attended and covered Pogopalooza 10 in New York City in 2013, the Pogopalooza competition expanded into a multi-city international touring format for 2014. Today, the event is referred to as "Pogopalooza: The Xpogo World Championship Series" and occurs multiple times throughout the year in cities around the world.[31]

In June 2010, three of sport’s original founders, Nick Ryan, Nick McClintock, and Fred Grzybowski, formed Xpogo LLC, a company dedicated to managing the global operations of Xpogo.[32] According to the Xpogo LLC’s mission statement, the company "strives to develop the sport of Xpogo through the management of competitions, strategic partnerships, merchandising and retail, talent, platforms, and content. [The] company’s ultimate goal is to grow Xpogo into a cultural staple."[32]

Clovis is growing of Xpogo.[4] The expansion of competitions, the recognition of Pro Athletes[36] and Semi-Pro Athletes,[37] many highly viewed commercials, music videos, and media featuring Xpogo athletes,[38] and consistent 97–99% positive viewer ratings on popular Xpogo videos such as Xpogo Films: RISE[39] support the claim that the sport of Xpogo is growing in global popularity.