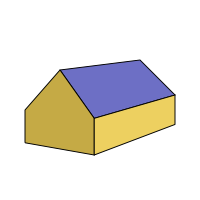 A form of gable roof (Käsbissendach) on the tower of the church in Hopfen am See, Bavaria

A gable roof[1] is a roof consisting of two sections whose upper horizontal edges meet to form its ridge. The most common roof shape in cold or temperate climates, it is constructed of rafters, roof trusses or purlins. The pitch of a gable roof can vary greatly.

The gable roof[2] is so common because of the simple design of the roof timbers and the rectangular shape of the roof sections. This avoids details which require a great deal of work or cost and which are prone to damage. If the pitch or the rafter lengths of the two roof sections are different, it is described as an 'asymmetrical gable roof'. A gable roof on a church tower (gable tower) is usually called a 'cheese wedge roof' (Käsbissendach) in Switzerland.

Its versatility means that the gable roof is used in many regions of the world. In regions with strong winds and heavy rain, gable roofs are built with a steep pitch in order to prevent the ingress of water. By comparison, in alpine regions, gable roofs have a shallower pitch which reduces wind exposure and supports snow better, reducing the risk of an uncontrolled avalanche and more easily retaining an insulating layer of snow.

Gable roofs are most common in cold climates. They are the traditional roof style of New England and the east coast of Canada. Nathaniel Hawthorne’s The House of Seven Gables and Lucy Maud Montgomery’s Anne of Green Gables, the authors of which are from these respective regions, both reference this roof style in their titles.[3]

Gable roofs have several advantages.[4] They are:

In German-speaking countries the types of gable roof are referred to as: