Green is a city in Summit County, Ohio, United States. The population was 25,943 at the 2010 census. It is part of the Akron, OH Metropolitan Statistical Area, located between Akron and Canton.

Green Township was first created in 1809 as part of Stark County. Green Township became part of Summit County after that county's establishment in 1840.[7] Green had several unincorporated hamlets, most notably Greensburg.[8] By 1900, five unincorporated settlements were in Green Township, surrounded by farmlands with valuable crops and areas of coal. The local economy transitioned from farming to business and manufacturing. By 1950, farmers began to sell their lands to developers for residential housing. The increased development in the community led to discussions about becoming a city. Voters approved the merger of the village with the rest of the township in 1991. In the beginning of 1991, Green Township was incorporated as the Village of Green. The village was declared a city in 1992,[9] with the first city mayor being John Torok.[10]

The City of Green is also notable for its legal battle against the NEXUS Pipeline, which runs dangerously close to residential neighborhoods, endangered wetlands, and the Comet Lake Dam.[11][12] Construction began in 2018 after a settlement of $7.5 million was reached with the city's government.[13]

There were 8,742 households, out of which 34.2% had children under the age of 18 living with them, 61.3% were married couples living together, 8.9% had a female householder with no husband present, and 26.5% were non-families. 22.1% of all households were made up of individuals, and 7.9% had someone living alone who was 65 years of age or older. The average household size was 2.59 and the average family size was 3.05. 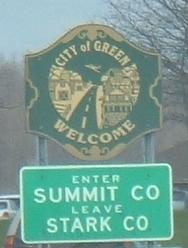 In the Ohio Senate, Green is represented by Democrat Vernon Sykes. Bob Young (R) represents Green in the Ohio House of Representatives. Young is a former Council member from Green.

The flag of Green was created as a result of a contest targeted towards school-age residents, due to similar design there was a tie between two creators, Matt Pitzo and Justin Callahan. The motto for the city was created by Carrie West, "A township from the past, a city of the future."[20] The flag can be viewed at Boettler Park on Massillon Road, along with the CAB(Central Administration Building), and Akron General also on Massillon Road.

Diebold Nixdorf, a world leader in products, software and services for banking and retail markets, is headquartered in Green.

According to Green's 2017 Comprehensive Annual Financial Report,[21] the largest employers in the city at the time were:

The Akron-Canton Regional Airport is located mostly in the city of Green, although a small part extends into Jackson Township in Stark County.[22] Singer Lake Bog is also located nearby.[23]