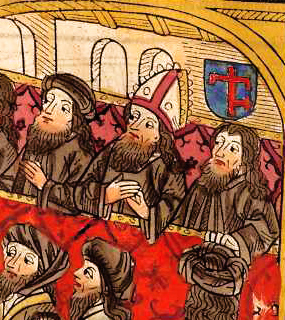 Gregory Tsamblak (left) on the Council of Constance

Gregory Tsamblak or Grigorij Camblak (Bulgarian: Григорий Цамблак; (c. 1365–1420) was a Bulgarian writer and cleric who was the metropolitan of Kiev between 1413 and 1420. A Bulgarian noble, Tsamblak lived and worked Bulgaria, but also in Medieval Serbia and Kyivan Rus and indebted these two countries to himself through his literary works, which represent a heritage of their national literatures, particularly the style of Old Serbian Vita made popular in the monasteries of the 12th century.

He was born in the capital of the Bulgarian Empire, Tarnovo, into a rich family. His cousin was Cyprian, Metropolitan of Kiev. Tsamblak was a disciple of the prominent Bulgarian hesychast, writer and follower of Patriarch Evtimiy of Bulgaria. After the fall of Bulgaria under Ottoman domination following the Bulgarian-Ottoman Wars he emigrated first to Constantinople, then became presbyter of the Church of Wallachia and Moldavia, and then he went to Serbia where he was abbott of Visoki Dečani[1] until finally becoming metropolitan of Kyiv.

Tsamblak stayed in Serbia from 1402 until his departure for Rus. During his sojourn in Serbia at Visoki Dečani, he wrote a biography of Stephen Uroš III Dečanski of Serbia,[1] a hymn for the church service honoring Stefan of Dečani, and a report on the transfer of the remnants of Saint Paraskeva to Serbia, and he also rewrote the Service to St. Petka (Paraskeva).

Tsamblak has been well-known and much appreciated in Kyivan Rus, Serbia and his native Bulgaria.

Tsamblak Hill on Livingston Island in the South Shetland Islands, Antarctica, is named after Gregory Tsamblak.