On July 12, 2011, Hahn won a special election for Congress to fill the seat vacated by Democrat Jane Harman. She defeated Republican Craig Huey, a Tea Party-backed direct marketer from the Torrance area, with 55 percent of the vote to Huey's 45 percent.[2] In February 2015, Hahn announced she was retiring from Congress to run for the Los Angeles County Board of Supervisors in 2016.[3] In the general election, Hahn defeated Steve Napolitano to succeed Don Knabe to become the next Los Angeles County supervisor from the 4th district.[4] She was sworn in on December 5, 2016.

Hahn was born in Los Angeles and raised in a politically involved family. She is the daughter of Ramona Belle (née Fox)[5][6] and Kenneth Frederick Hahn, a career member of the Los Angeles County Board of Supervisors who also served on the Los Angeles City Council.[7]

Hahn attended Abilene Christian University in Texas, earning a Bachelor of Science in education in 1974.[8]

She taught at the Good News Academy, a private school in Westchester from 1974 to 1978. Her other work in the private sector has included Public Affairs Region Manager at Southern California Edison from 1995 to 2000;[8] Vice President for Prudential Securities in Public Finance, Director of Community Outreach for Western Waste Industries, and Director of Marketing for the Alexander Haagen Company.

Hahn was elected to represent the Fifteenth District on the Los Angeles Charter Reform Commission, serving from 1997 to 1999.[9] As a Commissioner, she fought for many of the reforms included in the new charter, including Area Planning Commissions, local representation on the citizen commissions governing Los Angeles International Airport and the Port of Los Angeles, and a system of neighborhood councils.[7]

In 1998, U.S. Congresswoman Jane Harman declined to run for re-election, choosing instead to run for Governor of California. Hahn then won the Democratic nomination to succeed Harman, but lost the general election to Republican State Assemblyman Steven T. Kuykendall 49%-47%.[10] Hahn served on the Los Angeles City Council, representing the 15th District, from 2001 to 2011. The 15th District encompasses the San Pedro Harbor and includes the ethnically diverse communities of Harbor City, Harbor Gateway, San Pedro, Watts and Wilmington.[11] She was reelected to her third and final term in November 2009.[1]

She has been called "one of the most pro-labor members" of the City Council, and a "consistent opponent of layoffs and furloughs for city workers."[12] Hahn walked the picket lines with unionized dockworkers in 2002.[13] After the Bush administration suggested it would intervene in the labor dispute by using government troops to operate the ports, Hahn urged non-intervention.[13] "'There's no room for the federal government. There's only one reason for them to get involved, and that's to break the union', she said."[13] She was the leading force on the City Council behind both the passage of a living wage ordinance for the hotel workers along Century Boulevard near Los Angeles International Airport (LAX) and the provision of improved health benefits to LAX employees.[citation needed]

Hahn cites her efforts to clean up the Port of Los Angeles as one of her main accomplishments while on the City Council. The 2006 Clean Air Action Plan, which she and Mayor Antonio Villaraigosa pushed forward, set a goal of reducing pollution by 45 percent within five years and shifted the movement of goods at the ports to off-peak traffic hours.[14] Hahn supported the addition of the Clean Trucks Program that requires the 16,000 diesel trucks serving the ports meet 2007 EPA emission standards within five years.[14][15] She has noted that the ports have been Southern California's largest emitter of greenhouse gasses and diesel emissions and that the Clean Trucks Program also provides for improved working conditions, wages and benefits for port truckers.[15] Prior to the Clean Air Action Plan, she had already shifted about 35% of goods to be moved during off-peak hours. Hahn also helped advance redevelopment projects at the Port of Los Angeles in both San Pedro and Wilmington.[citation needed]

On the City Council, Hahn was a major proponent of gang prevention, intervention, and suppression programs. She led the campaign to pass Measure A, which would have dedicated a sustainable revenue stream for those programs, but fell just shy of the two thirds percentage needed to pass. On a smaller level, she expanded the Gang Alternatives Program to all elementary schools in her district.[citation needed]

Hahn ran for Lieutenant Governor of California in 2010 but was defeated in the Democratic primary by San Francisco Mayor Gavin Newsom, finishing second in a field of three candidates.[16] She received 33.3% of the vote against Newsom's 55.5%. Hahn is sworn into office by House Speaker John Boehner on July 19, 2011.

On February 7, 2011, Hahn announced her intention to run for the U.S. House of Representatives in the special election to fill California's 36th congressional district seat vacated by U.S. Representative Jane Harman's departure to head the Woodrow Wilson International Center for Scholars. 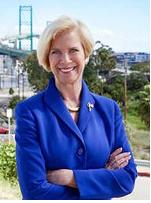 Hahn was one of sixteen candidates from all parties who competed in the special election primary on May 17, 2011.[17] She finished first with 24 percent of the vote; Republican Craig Huey finished second with 22 percent. Because no candidate received more than 50 percent, Hahn and Huey, the top two finishers, faced off in a special runoff election on July 12.[17] Many had expected California Secretary of State Debra Bowen to secure one of the top two spots, but Bowen finished in third place.[citation needed]

A poll conducted by the Daily Kos and Service Employees International Union shortly before the July 2011 election had Hahn in the lead over Huey by 8 points, (52 percent to 44 percent) with 4 percent undecided.[21] Her final margin of victory was 9 points, 54.56 percent to 45.44.[2]

After redistricting dismantled her old district, Hahn decided to run in the newly redrawn 44th district, which included her home in San Pedro. That district had previously been the 37th, represented by fellow Democratic Congresswoman Laura Richardson. The California Democratic Party endorsed Hahn.[22]

Hahn voted on Nov. 19, 2015, for HR 4038, legislation that would effectively halt the resettlement of refugees from Syria and Iraq to the United States.[24]

Los Angeles County Board of Supervisors

In 2018, Hahn supported the appointment of Nicole Tinkham as interim public defender, despite a letter signed by 390 public defenders who were concerned that Tinkham lacked criminal law experience and the potential for a conflict of interest, given Tinkham’s prior representation of the Los Angeles County Sheriff’s Department.[25]

Hahn is a lifelong resident of Los Angeles and lives in San Pedro.[1] She is the mother of three children, the grandmother of five, and a member of the Churches of Christ.[26]