Light painting inside an abandoned limestone quarry in France

Light painting, painting with light, light drawing, or light art performance photography are terms that describe photographic techniques of moving a light source while taking a long exposure photograph, either to illuminate a subject or space, or to shine light at the camera to 'draw', or by moving the camera itself during exposure of light sources. Practiced since the 1880s, the technique is used for both scientific and artistic purposes, as well as in commercial photography.

Light painting also refers to a technique of image creation using light directly, such as with LEDs on a projective surface using the approach that a painter approaches a canvas.

Light painting dates back to 1889 when Étienne-Jules Marey and Georges Demeny traced human motion in the first known light painting Pathological Walk From in Front.[1]

The technique was used in Frank Gilbreth's work with his wife Lillian Moller Gilbreth in 1914 when the pair used small lights and the open shutter of a camera to track the motion of manufacturing and clerical workers.

Man Ray, in his 1935 series "Space Writing," was the first known art photographer to use the technique. He made a self-portrait with a time exposure and while the shutter was open, with a penlight he inscribed his name in cursive script in the space between him and the camera, overwriting the letters with more cryptic marks.[2][3] Historian of photography Ellen Carey (*1952) describes her discovery of the artist's signature in this image while examining it in 2009.[4] 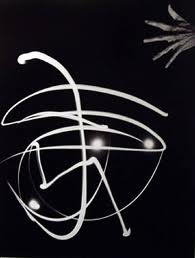 Photographer Barbara Morgan began making light paintings in 1935–1941.[5] Her 1941 photomontage Pure Energy and Neurotic Man incorporates light drawing and realises her stated aim; "that if I should ever seriously photograph, it would be...the flux of things. I wanted then, and still do, to express the ‘thing’ as part of total flow."[6] In making innovative photographs of dancers, including Martha Graham and Erick Hawkins she would have them move while holding lights.

In 1949 Pablo Picasso was visited by Gjon Mili, a photographer and lighting innovator, who introduced Picasso to his photographs of ice skaters with lights attached to their skates. Immediately Picasso started making images in the air with a small flashlight in a dark room. This series of photos became known as Picasso's "light drawings." Of these photos, the most celebrated and famous is known as Picasso draws a Centaur.[7]

Peter Keetman (1916–2005), who studied photography in Munich from 1935 to 1937, was the 1949 co-founder of FotoForm (together with Otto Steinert, Toni Schneiders et al.), a group with great impact on the new photography in the 50s and 60s in Germany and abroad. He produced a series Schwingungsfigur (oscillating figures) of complex linear meshes, often with moiré effects, using a point-source light on a pendulum.[8]

During the 1970s and '80s Eric Staller[9] used this technology for numerous photo projects that were called "Light Drawings". Light paintings up to 1976 are classified as light drawings.[10]

In 1977 Dean Chamberlain extended the technique using handheld lights to selectively illuminate and/or color parts of the subject or scene with his image Polyethylene Bags On Chaise Longue at the Rochester Institute of Technology. Dean Chamberlain was the first artist to dedicate his entire body of work to the light painting art form.[1] The artist photographer Jacques Pugin made several series of images with the light drawing technique in 1979.[11] Now, with modern light painting, one uses more frequently choreography and performance to photograph and organize.

Since the 1980s, Vicki DaSilva has been working exclusively in light painting and light graffiti.[17] In 1980, DaSilva[18] started making deliberate text light graffiti works, the first being "Cash".[19] She continued these light graffiti photographs throughout the 1980s and eventually started using 4 foot fluorescent bulbs hooked up to pulley systems to create sheets of light. In the early 2000s she began making work with 8 foot fluorescent lamps, holding the lamp vertically and walking through spaces with it.[20][21]

From the late 1980s Tokihiro Satō's photographs combine light, time and space in recording his movements in a series beginning with his “photo respirations” where his use of an 8 x 10-inch view camera fitted with a strong neutral-density filter to achieve lengthy exposures lasting one to three hours provide the opportunity for him to move through the landscape.[22] When shooting in daylight, using a mirror, he flashed light from the sun into the camera lens, resulting in points of light and flares that punctuate the image and track his movements, though his presence is not seen directly. For nocturnal or interior views he “draws” with a small torch.

Light painting as an art form enjoyed a surge in popularity in the 21st century, partly due to the increasing availability of dSLR cameras and mobile phone cameras enabling immediate feedback for adjustments of lights and exposure; advances in portable light sources such as LEDs; and the advent of media sharing websites by which practitioners can exchange images and ideas.

In March 2007, JanLeonardo coined the term light art performance photography (LAPP)[23] which emphasises the performative aspect that is evident earlier in Satō's work,[24] and used it to describe the creation of new figures and structures only with light. Following the original Greek meaning of Photography (Greek φῶς, phos, genitive: φωτός, photos, "light" (of the luminary), "brightness" and γράφειν, graphein, "drawing", "carve", "create", "write") it is a symbiosis of light art and photography. The main difference from other light painting or light writing, it has been claimed,[23] is the role of the background in the photo.[clarification needed] Locations in the natural landscape or amongst buildings, such as industrial ruins, are carefully researched for distinctive backgrounds for each composition and LED-lamps are often used for contrasting cold and warm light to emphasize the existing structures. Collaboration is usually required in the performance of the work, with one person creating light figures and structures while the other operates the camera. In collaboration with Jörg Miedza, JanLeonardo founded the project LAPP-PRO.de that further developed the technique until in 2011, the pair disassociated. LAPP has grown internationally since its inception.[25][23]

Light painting on the road

Light painting using handheld lights to selectively illuminate or colour parts of the subject or scene or to evenly light large architectural interiors has been used in professional photography since the 1930s as described by Leslie Walker[26] and Ansel Adams.[27] Light painting requires a slow shutter speed, usually at least a second in duration. Light painting can imitate characteristics of traditional painting; superimposition and transparency can easily be achieved by moving, adding or removing lights or subjects during or between exposures.

Projector light painting, by waving a white translucent flash diffuser in the light path of a portable projector, the continuous motion creates an invisible screen in the air for the projected image in the photo.

Light paintings can be created using a webcam.[clarification needed] The painted image can already be seen while drawing by using a monitor or projector. Another technique is the projection of images on to irregular surfaces (such as faces or buildings), in effect "painting" them with light. A photograph or other fixed portrayal of the resulting image is then made.

Kinetic light painting is achieved by moving the camera and is the antithesis of traditional photography. At night, or in a dark room, the camera can be removed from the tripod and used like a paintbrush. For example, using the night sky as the canvas, the camera as the brush and artificially-lit cityscapes as the palette. Putting energy into moving the camera by stroking lights,[clarification needed] making patterns and laying down backgrounds can create abstract artistic images.

A variety of light sources can be used, ranging from simple flashlights to dedicated devices like the Hosemaster, which uses a fiber optic light pen.[28] Other sources of light including candles, matches, fireworks, lighter flints, steel wool, glowsticks, and poi are also popular.

A tripod is usually necessary due to the long exposure times involved. Alternatively, the camera may be placed on or braced against a table or other solid support. A shutter release cable or self-timer is generally employed in order to minimize camera shake. Color gels can also be used to color the light sources.

Some light painters make their own dedicated devices to create light trails over the photo background; this can include computer-controlled devices like the Pixelstick. These devices are often Arduino-controlled LED arrays that can render images that could not be made by drawing in the air with a single light source alone. LED lights, luminescent materials, pyrotechnics, fireworks and flashlights are also used.