Cross section across the Mariana Plate

Subduction at the Mariana plate has been going on for over 50 million years.[3] Some theories of the origin of this microplate is that when the Pacific plate began to subduct beneath the Philippine plate the volcanism and spreading ridge started to make an arc. This geological activity caused the section of the Philippine plate to break off and become the Mariana microplate. The Mariana Islands consist of volcanoes that are active and dormant[4] and are made up of volcanic and sedimentary rocks from the Pleistocene.[5]

As the Pacific Plate subducts beneath the Mariana Plate, it creates a trench. This is the Mariana Trench, and it is the deepest trench in the world. Another result from this subduction are the Mariana Islands. These are formed from dehydration of the subducting, old oceanic crust creates melt, and the melt rises to the surface through a volcano. This volcanism has been occurring for almost 50 million years.[3] The rock type in the area is volcaniclastic sediments on top of igneous rocks. The source of these rocks are from crustal spreading.[6]

Just off the eastern coast of Mariana there are big seamounts made of serpentinized periodite.[7] They are formed from mud volcanism. The composition for the seamounts differ in the Izu–Ogasawara Trench and Mariana systems which indicates regional changes in geology.[3] 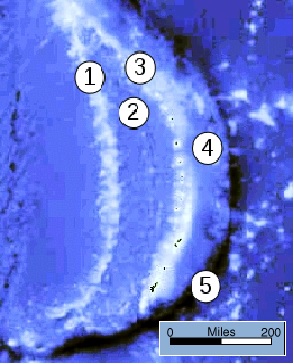 The tectonic plate is approximately 100 km thick and converging to the east at a rate of 50–80 mm/yr with the Pacific Plate subducting at 60–100 mm/yr [8] This eastern subduction is divided into the Mariana Trench, which forms the southeastern boundary, and the Izu–Ogasawara Trench the northeastern boundary. The Izu–Ogasawara Trench and Mariana subduction zones are traveling at different rates.[9] While the northern section of the Izu–Ogasawara Trench plate is subducting at 44 mm/yr, the southern section subducts at 14 mm/yr. The subducting Pacific Plate dips at about 10 degrees and directed 83 degrees west of north.[4] The northern subduction zone is expanding by rifting while the southern contains a strike slip fault.[7] Seismologists have been studying how the subducting slabs underneath the Mariana island arc are entering the lower mantle and being redirected horizontally, deflecting off the upper to lower mantle transition zone.[10][6]

The Mariana Plate is also separating at a rate of 30 mm/yr from the Philippine Plate to the west. The Mariana Trough is located on the western side of the island arc along with the back arc basin. Around 3 Ma the basin began spreading at 4.7 cm/yr.[6] Due to the back arc spreading in the Mariana Trough the islands are moving east while the Philippine Sea plate is staying almost stationary.[4]

Since there is volcanism happening on the Mariana back arc ridge and basin, this system could continue to grow but combining the rate of separation from the Philippine plate along with the subduction destroying the Mariana plate it is possible this microplate could eventually dissipate. The rate of subduction is greater than the rate of uplift.[11] The collision of aseismic ridges and the axis of the trench explain how the plate curvature is evolving.[5]