This article may require cleanup to meet Wikipedia's quality standards. The specific problem is: external links in the body of this article. Please help improve this article if you can. (January 2014) (Learn how and when to remove this template message)

Microsoft Robotics Developer Studio (Microsoft RDS, MRDS) is a discontinued Windows-based environment for robot control and simulation that was aimed at academic, hobbyist, and commercial developers and handled a wide variety of robot hardware. It required the Microsoft Windows 7 operating system or later.

Microsoft Robotics Developer Studio includes support for packages to add other services to the suite. Those currently available include Soccer Simulation and Sumo Competition by Microsoft, and a community-developed Maze Simulator, a program to create worlds with walls that can be explored by a virtual robot, and a set of services for OpenCV. Most of the additional packages are hosted on CodePlex (search for Robotics Studio). Course materials are also available.

Example of a Reference Platform Robot

There are four main components in RDS:

CCR and DSS are also available separately for use in commercial applications that require a high level of concurrency and/or must be distributed across multiple nodes in a network. This package is called the CCR and DSS Toolkit.

The tools that allow to develop an MRDS application contain a graphical environment (Microsoft Visual Programming Language : VPL) command line tools allow you to deal with Visual Studio projects (VS Express version is enough) in C#, and 3D simulation tools.

A simulated robot with a Kinect sensor 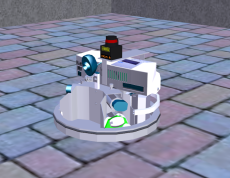 Microsoft Robotics and the Future

Microsoft Robotics Developer Studio has not been updated or patched since version 4.0, which was released on March 8, 2012. On September 22, 2014, as part of Microsoft's restructuring plan, the Robotics division of Microsoft Research was suspended, according to a tweet from Ashley Feniello, a principal developer at Microsoft Robotics division of MSR (Microsoft Research). It is now highly unlikely that MRDS will ever be updated again, however forum members (MVPs) may still offer limited support.[6]

This section's use of external links may not follow Wikipedia's policies or guidelines. Please improve this article by removing excessive or inappropriate external links, and converting useful links where appropriate into footnote references. (March 2019) (Learn how and when to remove this template message)
Microsoft development tools
Categories
Categories: