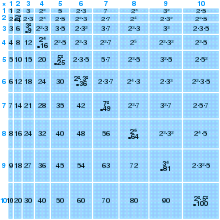 The decimal multiplication table was traditionally taught as an essential part of elementary arithmetic around the world, as it lays the foundation for arithmetic operations with base-ten numbers. Many educators believe it is necessary to memorize the table up to 9 × 9.[1] "Table of Pythagoras" on Napier's bones[3]

In 493 AD, Victorius of Aquitaine wrote a 98-column multiplication table which gave (in Roman numerals) the product of every number from 2 to 50 times and the rows were "a list of numbers starting with one thousand, descending by hundreds to one hundred, then descending by tens to ten, then by ones to one, and then the fractions down to 1/144."[6]

The illustration below shows a table up to 12 × 12, which is a size commonly used nowadays in English-world schools.

In China, however, because multiplication of integers is commutative, many schools use a smaller table as below. Some schools even remove the first column since 1 is the multiplicative identity.

The traditional rote learning of multiplication was based on memorization of columns in the table, in a form like

This form of writing the multiplication table in columns with complete number sentences is still used in some countries, such as Bosnia and Herzegovina,[citation needed] instead of the modern grids above.

Patterns in the tables

There is a pattern in the multiplication table that can help people to memorize the table more easily. It uses the figures below:

Figure 1 is used for multiples of 1, 3, 7, and 9. Figure 2 is used for the multiples of 2, 4, 6, and 8. These patterns can be used to memorize the multiples of any number from 0 to 10, except 5. As you would start on the number you are multiplying, when you multiply by 0, you stay on 0 (0 is external and so the arrows have no effect on 0, otherwise 0 is used as a link to create a perpetual cycle). The pattern also works with multiples of 10, by starting at 1 and simply adding 0, giving you 10, then just apply every number in the pattern to the "tens" unit as you would normally do as usual to the "ones" unit.

For example, to recall all the multiples of 7: Multiplying two whole numbers, each from 6 to 10 can be achieved using fingers and thumbs as follows:

Multiplying 9 with a whole number from 1 to 10 can also be achieved as follows:

Tables can also define binary operations on groups, fields, rings, and other algebraic systems. In such contexts they are called Cayley tables. Here are the addition and multiplication tables for the finite field Z5:

For other examples, see group, and octonion.

The Chinese multiplication table consists of eighty-one sentences with four or five Chinese characters per sentence, making it easy for children to learn by heart. A shorter version of the table consists of only forty-five sentences, as terms such as "nine eights beget seventy-two" are identical to "eight nines beget seventy-two" so there is no need to learn them twice. A minimum version by removing all "one" sentences, consists of only thirty-six sentences, which is most commonly used in schools in China. It is often in this order: 2x2=4, 2x3=6, ..., 2x8=16, 2x9=18, 3x3, 3x4, ..., 3x9, 4x4, ..., 4x9, 5x5,...,9x9

A bundle of 21 bamboo slips dated 305 BC in the Warring States period in the Tsinghua Bamboo Slips (清華簡) collection is the world's earliest known example of a decimal multiplication table.[8]

A modern representation of the Warring States decimal multiplication table used to calculate 12 × 34.5

Standards-based mathematics reform in the US

In 1989, the National Council of Teachers of Mathematics (NCTM) developed new standards which were based on the belief that all students should learn higher-order thinking skills, which recommended reduced emphasis on the teaching of traditional methods that relied on rote memorization, such as multiplication tables. Widely adopted texts such as Investigations in Numbers, Data, and Space (widely known as TERC after its producer, Technical Education Research Centers) omitted aids such as multiplication tables in early editions. NCTM made it clear in their 2006 Focal Points that basic mathematics facts must be learned, though there is no consensus on whether rote memorization is the best method. In recent years, a number of nontraditional methods have been devised to help children learn multiplication facts, including video-game style apps and books that aim to teach times tables through character-based stories.