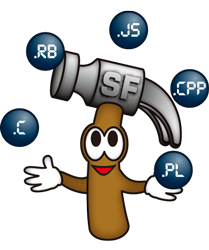 The OSDN repository hosts more than 5,000 projects and more than 50,000 registered users.[4] Registered software used to be mostly specialized for Japanese use, such as input method systems, fonts, and so on, but there are popular applications like Cabos, TeraTerm, and Shiira. Also, since the renewal of the brand name to OSDN, more and more projects that used to be developed on SourceForge are moving to OSDN, such as MinGW, TortoiseSVN, Android-x86, and Clonezilla.[5]

On May 11, 2015, the site was renamed from "SourceForge.JP" to "OSDN".[10][11] In the same month that OSDN changed the site name, SourceForge caused two controversies: DevShare adware and project hijacking. In contrast, OSDN totally refuses adware bundling and project hijacking.[12][13] For that reason, the changing of the site name to OSDN is perceived to have been done based on criticism of and adverse reactions to SourceForge's monetization.[14]

OSDN provides revision control systems such as CVS, SVN, Git, Mercurial, and every feature in SourceForge. What makes OSDN different from SourceForge is the bug tracking system and the wiki system. On OSDN, these are very Trac-like systems.[15]