Input of characters not natively available
Typing Chinese with Cangjie 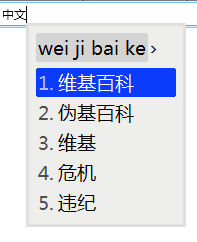 Operation of a Chinese pinyin-based IME

For instance, on the computer, this allows the user of Latin keyboards to input Chinese, Japanese, Korean and Indic characters. On hand-held devices, it enables the user to type on the numeric keypad to enter Latin alphabet characters (or any other alphabet characters) or touch a screen display to input text. On some operating systems, an input method is also used to define the behaviour of the dead keys.

Although originally coined for CJK (Chinese, Japanese and Korean) computing, the term is now sometimes used generically to refer to a program to support the input of any language. To illustrate, in the X Window System, the facility to allow the input of Latin characters with diacritics is also called an input method.

On Windows XP or later Windows, Input method, or IME, are also called Text Input Processor, which are implemented by the Text Services Framework API.

Relationship between the methodology and implementation