The Cangjie input method (Tsang-chieh input method, sometimes called Changjie, Cang Jie, Changjei[1] or Chongkit) is a system for entering Chinese characters into a computer using a standard computer keyboard. In filenames and elsewhere, the name Cangjie is sometimes abbreviated as cj.

The input method was invented in 1976 by Chu Bong-Foo, and named after Cangjie (Tsang-chieh), the mythological inventor of the Chinese writing system, at the suggestion of Chiang Wei-kuo, the former Defense Minister of Taiwan. Chu Bong-Foo released the patent for Cangjie in 1982, as he thought that the method should belong to Chinese cultural heritage.[2] Therefore, Cangjie has become open-source software and is on every computer system that supports traditional Chinese characters, and it has been extended so that Cangjie is compatible with the simplified Chinese character set. Cangjie is the first Chinese input method to use the QWERTY keyboard. Chu saw that the QWERTY keyboard had become an international standard, and therefore believed that Chinese-language input had to be based on it.[3] Other, earlier methods use large keyboards with 40 to 2400 keys, except the Four-Corner Method, which uses only number keys.

Unlike the Pinyin input method, Cangjie is based on the graphological aspect of the characters: each graphical unit, called a "radical" (not to confused with Kangxi radicals), is represented by a basic character component, 24 in total, each mapped to a particular letter key on a standard QWERTY keyboard. An additional "difficult character" function is mapped to the X key. Keys are categorized into four groups, to facilitate learning and memorization. Assigning codes to Chinese characters is done by separating the constituent "radicals" of the characters.

The basic character components in Cangjie are called "radicals" (字根) or "letters" (字母). There are 24 radicals but 26 keys; the 24 radicals (the basic shapes 基本字形) are associated with roughly 76 auxiliary shapes (輔助字形), which in many cases are either rotated or transposed versions of components of the basic shapes. For instance, the letter A (日) can represent either itself, the slightly wider 曰, or a 90° rotation of itself. (For a more complete account of the 76-odd transpositions and rotations than the ones listed below, see the article on Cangjie entry in Chinese Wikibooks.)

The 24 keys are placed in four groups:

Chu Bong-Foo has provided alternate names for some letters according to their characteristics. For example, H (竹) is also called 斜, which means slant. The names form a rhyme to help learners memorize the letters, each group being in a line (The sounds of final characters are given in parentheses):

The typist must be familiar with several decomposition rules (拆字規則) that define how to analyze a character to arrive at a Cangjie code.

The rules are subject to various principles:

Some forms are always decomposed in the same way, whether the rules say they should be decomposed this way or not. The number of such exceptions is small:

Some forms cannot be decomposed. They are represented by an X, which is the 難 key on a Cangjie keyboard.[4]

[in translation]
In terms of output: The output and input, in fact, [form] an integrated whole; there is no reason that [they should be] dogmatically separated into two different facilities.… This is in fact necessary.…

In this early system, when the user types "yk", for example, to get the Chinese character 文, the Cangjie codes do not get converted to any character encoding and the actual string "yk" is stored. The Cangjie code for each character (a string of 1 to 5 lowercase letters plus a space) was the encoding of that particular character. 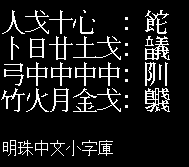 Demonstration of character generator Mingzhu's capability to generate characters according to the codes. The first character is 𮨻 (⿰飠它), which denotes a kind of soup in Xuzhou cuisine. Other characters are never recorded.

A particular "feature" of this early system is that, if one sends random lowercase words to it, the character generator will attempt to construct Chinese characters according to the Cangjie decomposition rules, sometimes causing strange, unknown characters to appear. This unintended feature, "automatic generation of characters", is described in the manual and is responsible for producing more than 10,000 of the 15,000 characters that the system can handle. The name Cangjie, evocative of the creation of new characters, was indeed apt for this early version of Cangjie.

The presence of the integrated character generator also explains the historical necessity for the existence of the "X" key, which is used for the disambiguation of decomposition collisions: because characters are "chosen" when the codes are "output", every character that can be displayed must in fact have a unique Cangjie decomposition. It would not make sense—nor would it be practical—for the system to provide a choice of candidate characters when a random text file is displayed, as the user would not know which of the candidates is correct.

Cangjie was designed to be an easy-to-use system to help promote the use of Chinese computing. However, many users find Cangjie is difficult to learn and use, with many difficulties caused by poor instruction.[citation needed]

With enough practice, users can overcome the above problems. Typical touch-typists can type Chinese at 25 characters per minute (cpm), or better, using Cangjie, despite having difficulty remembering the list of auxiliary shapes or the decomposition rules. Experienced Cangjie typists can reportedly attain a typing speed from 60 cpm to over 200 cpm.

The decomposition of a character depends on a predefined set of "standard shapes" (標準字形). However, as many variations of Cangjie exist in different countries, the standard shape of a certain character in Cangjie is not always the one the user has learnt before. Learning Cangjie then entails learning not only Cangjie itself but also unfamiliar standard shapes for some characters. The Cangjie input method editor (IME) does not handle mistakes in decomposition except by informing the user (usually by beeping) that there is a mistake. However, Cangjie is originally designed to assign different codes to different variants of a character. For example, in the Cangjie provided on Windows, the code for 產 is YHHQM, which corresponds not to the shape of this character but to another variant, 産. This is a problem resulting from the implementation of Cangjie on Windows. In the original Cangjie, 產 should be YKMHM (the first part is 文) while 産 is YHHQM (the first part is 产).

Punctuation marks are not geometrically decomposed, but rather given predefined codes that begin with ZX followed by a string of three letters related to the ordering of the characters in the Big5 code. (This set of codes was added to Cangjie on the traditional Chinese version of Windows 95. On Windows 3.1, Cangjie did not have a set of codes for punctuation marks.) Typing punctuation marks in Cangjie thus becomes a frustrating exercise involving either memorization or pick-and-peck. However, this is solved on modern systems through accessing a virtual keyboard on screen (On Windows, this is activated by pressing Ctrl + Alt + comma key).

Commonly-made errors include not considered as alternative codes. For example, if one does not decompose 方 from top to bottom into YHS, but instead type YSH according to stroke order, Cangjie does not return the character 方 as a choice.

Since Cangjie requires all 26 keys of the QWERTY keyboard, it cannot be used to input Chinese characters on feature phones, which have only a 12-key keypad. Alternative input methods, such as Zhuyin, 5-stroke (or 9-stroke by Motorola), and the Q9 input method, are used instead.

The Cangjie input method is commonly said to have gone through five generations (commonly referred to as "versions" in English), each of which is slightly incompatible with the others. Currently, version 3 (第三代倉頡) is the most common and supported natively by Microsoft Windows. Version 5 (第五代倉頡), supported by the Free Cangjie IME and previously the only Cangjie supported by SCIM, represents a significant minority method and is supported by iOS.

The early Cangjie system supported by the Zero One card on the Apple II was Version 2; Version 1 was never released.

The Cangjie input method supported on the classic Mac OS resembles both Version 3 and Version 5.

Version 6 has not yet been released to the public, but is being used to create a database which can accurately store every historical Chinese text.

Besides the wildcard key, many of these features are convenient for casual users but unsuitable for touch-typists because they make the Cangjie IME unpredictable.

There have also been various attempts to "simplify" Cangjie one way or another:

Many researchers have discussed ways to decompose Chinese characters into their major components, and tried to build applications based on the decomposition system. The idea can be referred to as the study of the Genes of Chinese Characters [zh]. Cangjie codes offer a basis for such an endeavour. Academia Sinica in Taiwan[5] and Jiaotong University in Shanghai[6] have similar projects as well.

One direct application of the use of decomposed characters is the possibility of computing the similarities between different Chinese characters.[7] The Cangjie input method offers a good starting point for this kind of application. By relaxing the limit of five codes for each Chinese character and adopting more detailed Cangjie codes, visually similar characters can be found by computation. Integrating this with pronunciation information enables computer-assisted learning of Chinese characters.[8]

This article may require cleanup to meet Wikipedia's quality standards. The specific problem is: these footnotes should be linked to the places in the text above they refer to, e.g. with Template:efn. Please help improve this article if you can. (May 2022) (Learn how and when to remove this template message)