Xiang or Hsiang (Chinese: 湘; pinyin: xiāng; Mandarin pronunciation: [ɕi̯ɑ́ŋ]); Changsha Xiang: sian1 y3, also known as Hunanese (English: /ˌhuːnɑːˈniːz/), is a group of linguistically similar and historically related Sinitic languages, spoken mainly in Hunan province but also in northern Guangxi and parts of neighboring Guizhou and Hubei provinces. Scholars divided Xiang into five subgroups, Chang-Yi, Lou-Shao, Hengzhou, Chen-Xu and Yong-Quan.[2] Among those, Lou-shao, also known as Old Xiang, still exhibits the three-way distinction of Middle Chinese obstruents, preserving the voiced stops, fricatives, and affricates. Xiang has also been heavily influenced by Mandarin, which adjoins three of the four sides of the Xiang speaking territory, and Gan in Jiangxi Province, from where a large population immigrated to Hunan during the Ming Dynasty.[3]

Prehistorically, the main inhabitants were the ancient country of Ba, Nanman, Baiyue and other tribes whose languages cannot be studied. During the Warring States period, large numbers of Chu migrated into Hunan. Their language blended with that of the original natives to produce a new dialect Nanchu (Southern Chu).[7] During Qin and Han dynasty, most part of today's Eastern Hunan belonged to Changsha Kingdom. According to Yang Xiong's Fangyan, people in this region spoke Southern Chu, which is considered[by whom?] the ancestor of Xiang Chinese today.[8][verification needed]

During the Tang dynasty, a large-scale emigration took place with people emigrating from the north to the south, bringing Middle Chinese into Hunan.[9] Today's Xiang still keeps some Middle Chinese words, such as 嬉 (to have fun), 薅 (to weed), 行 (to walk). Entering tone vowels started weakening in Hunan at this time. Migrants who came from the North mainly settled in northern Hunan followed by western Hunan. For this reason northern and western Hunan are Mandarin districts.[7]

Migrants from Jiangxi concentrated mainly in southeastern Hunan and present day Shaoyang and Xinhua districts. They came for two reasons:[7] The first is that Jiangxi became too crowded and its people sought expansion. The second is that Hunan suffered greatly during the Mongol conquest of the Song dynasty, when there was mass slaughter.[10] The late Yuan Dynasty peasant uprising caused a great many casualties in Hunan.

Quanzhou County became part of Guangxi province after the adjustment of administrative divisions in the Ming Dynasty. Some features of Xiang at that time were kept in this region.

Since the classification of Yuan Jiahua (1960), Xiang has been considered one of seven major groups of varieties of Chinese.[11] Jerry Norman classified Xiang, Gan and Wu as central groups, intermediate between the Mandarin group to the north and the southern groups, Min, Hakka and Yue.[12] 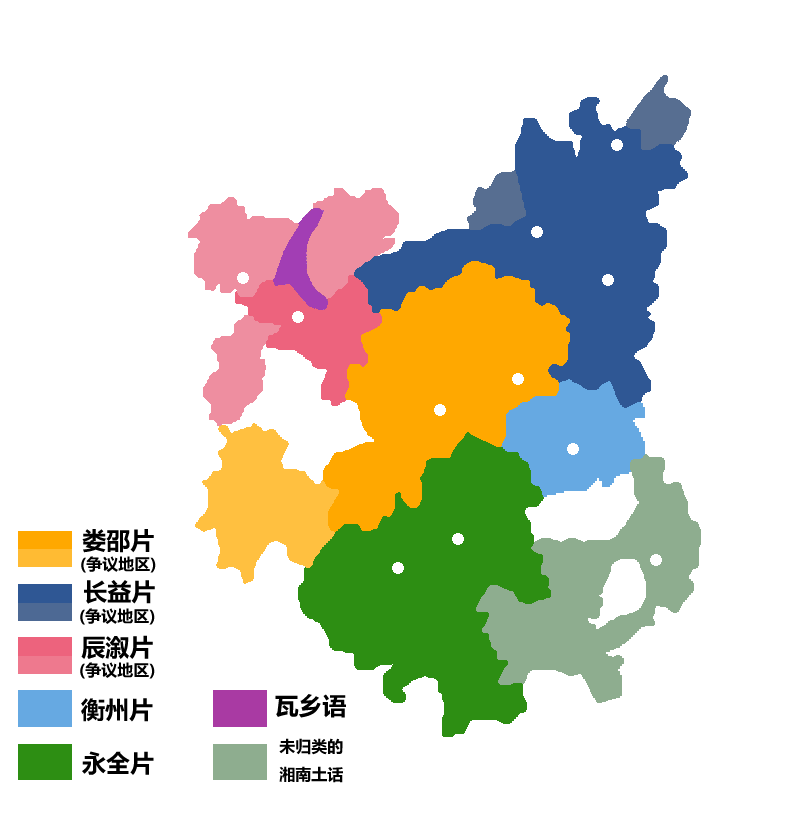 Xiang and other subgroups identified by Bao & Chen

Pervasive influence from Mandarin dialects has made Xiang dialects difficult to classify.[13] Yuan Jiahua divided Xiang into New Xiang, in which voicing has been lost completely, and Old Xiang varieties, which retain voiced initials in at least some tones.[14] The Changsha dialect is usually taken as representative of New Xiang, while Shuangfeng dialect represents Old Xiang.[15] Norman describes the boundary between New Xiang and Southwestern Mandarin as one of the weakest in China, with considerable similarities between dialects near either side of the boundary, though more distant dialects are mutually unintelligible.[16] Indeed, Zhou Zhenhe and You Rujie (unlike most authors) classified New Xiang as part of Southwestern Mandarin.[17][18]

The Language Atlas of China relabelled the New and Old Xiang groups as Chang-Yi and Lou-Shao respectively, and identified a third subgroup, Ji-Xu, in some parts of Western Hunan.[19] Bao & Chen (2005) split out part of Atlas's Chang-Yi subgroup as a new Hengzhou subgroup, and part of Lou-Shao as a Yong-Quan subgroup. They also reclassified parts of the Ji–Xu subgroup as Southwestern Mandarin, renaming the remainder of the subgroup as Chen-Xu Xiang. Their five subgroups are:

Xiang is spoken by over 36 million people in China, primarily in the most part of the Hunan province, and in the four counties of Quanzhou, Guanyang, Ziyuan, and Xing'an in northeastern Guangxi province, and in several places of Guizhou and Guangdong provinces. It is abutted by Southwestern Mandarin-speaking areas to the north and west, as well as by Gan in the eastern parts of Hunan and Jiangxi. Xiang is also in contact with the Qo-Xiong Miao and Tujia languages in West Hunan.