Type of porch
This article needs additional citations for verification. Please help improve this article by adding citations to reliable sources. Unsourced material may be challenged and removed.Find sources: "Portico" – news · newspapers · books · scholar · JSTOR (December 2007) (Learn how and when to remove this template message)

The portico of the Croome Court in Croome D'Abitot (England) 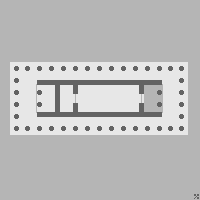 Temple diagram with location of the pronaos highlighted

A portico is a porch leading to the entrance of a building, or extended as a colonnade, with a roof structure over a walkway, supported by columns or enclosed by walls. This idea was widely used in ancient Greece and has influenced many cultures, including most Western cultures.

Porticos are sometimes topped with pediments. Palladio was a pioneer of using temple-fronts for secular buildings. In the UK, the temple-front applied to The Vyne, Hampshire, was the first portico applied to an English country house.

A pronaos (UK: /proʊˈneɪ.ɒs/ or US: /proʊˈneɪ.əs/) is the inner area of the portico of a Greek or Roman temple, situated between the portico's colonnade or walls and the entrance to the cella, or shrine. Roman temples commonly had an open pronaos, usually with only columns and no walls, and the pronaos could be as long as the cella. The word pronaos (πρόναος) is Greek for "before a temple". In Latin, a pronaos is also referred to as an anticum or prodomus.

The different variants of porticos are named by the number of columns they have. The "style" suffix comes from the Greek στῦλος, "column".[1]

Temple of Portunus in Rome, with its tetrastyle portico of four Ionic columns

The tetrastyle has four columns; it was commonly employed by the Greeks and the Etruscans for small structures such as public buildings and amphiprostyles.

The Romans favoured the four columned portico for their pseudoperipteral temples like the Temple of Portunus, and for amphiprostyle temples such as the Temple of Venus and Roma, and for the prostyle entrance porticos of large public buildings like the Basilica of Maxentius and Constantine. Roman provincial capitals also manifested tetrastyle construction, such as the Capitoline Temple in Volubilis.

The North Portico of the White House is perhaps the most notable four-columned portico in the United States.

Hexastyle buildings had six columns and were the standard façade in canonical Greek Doric architecture between the archaic period 600–550 BCE up to the Age of Pericles 450–430 BCE.

The hexastyle Temple of Concord at Agrigentum (c. 430 BCE)

Hexastyle was also applied to Ionic temples, such as the prostyle porch of the sanctuary of Athena on the Erechtheum, at the Acropolis of Athens.

With the colonization by the Greeks of Southern Italy, hexastyle was adopted by the Etruscans and subsequently acquired by the ancient Romans. Roman taste favoured narrow pseudoperipteral and amphiprostyle buildings with tall columns, raised on podiums for the added pomp and grandeur conferred by considerable height. The Maison Carrée at Nîmes, France, is the best-preserved Roman hexastyle temple surviving from antiquity.

The western side of the octastyle Parthenon in Athens

Octastyle buildings had eight columns; they were considerably rarer than the hexastyle ones in the classical Greek architectural canon. The best-known octastyle buildings surviving from antiquity are the Parthenon in Athens, built during the Age of Pericles (450–430 BCE), and the Pantheon in Rome (125 CE). The destroyed Temple of Divus Augustus in Rome, the centre of the Augustan cult, is shown on Roman coins of the 2nd century CE as having been built in octastyle.

The decastyle has ten columns; as in the temple of Apollo Didymaeus at Miletus, and the portico of University College London.[1]

The only known Roman decastyle portico is on the Temple of Venus and Roma, built by Hadrian in about 130 CE.[3]

Look up portico in Wiktionary, the free dictionary.
Rooms and spaces of a house
Authority control: National libraries
Categories
Categories: