On Microsoft Windows, a special folder is a folder that is presented to the user through an interface as an abstract concept instead of an absolute folder path. (The synonymous term shell folder is sometimes used instead.) Special folders make it possible for any application to ask the operating system where an appropriate location for certain kinds of files can be found; independently of which version or user language of Windows is being used. 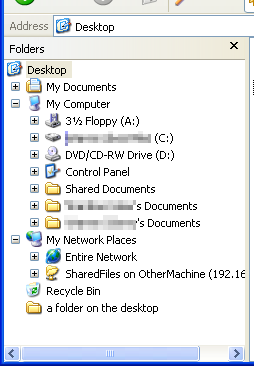 Windows uses the concept of special folders to present the contents of the storage devices connected to the computer in a fairly consistent way that frees the user from having to deal with absolute file paths, which can (and often do) change between operating system versions, and even individual installations. The idea has evolved over time, with new special folders being added in every version of Windows after their introduction in Windows 95.

Microsoft's "Compatible with Windows" software logo[2] requires that an application make use of special folders locations to locate the appropriate folders in which documents and application settings should be stored.

Some third-party programs add their own virtual folders to Windows Explorer.

The following tables list most of the file system and virtual folders that are available as of Windows Vista. The OS version in which each special folder was introduced is given as well. Items like %USERPROFILE% and %windir% are Windows environment variables.

This section's factual accuracy may be compromised due to out-of-date information. Please help update this article to reflect recent events or newly available information. (October 2011)