Trapper John, M.D. is an American medical drama television series and spin-off of the film M*A*S*H (1970). Pernell Roberts portrayed the title character, a lovable surgeon who became a mentor and father figure in San Francisco, California. The show ran on CBS for seven seasons, from September 23, 1979, to September 4, 1986. Roberts played the character more than twice as long as had Wayne Rogers (1972–75) on the TV series M*A*S*H. The role of Trapper John was played by Elliott Gould in the film.

Trapper John, M.D. focuses on Dr. "Trapper" John McIntyre (Pernell Roberts) 28 years after his discharge from the 4077th Mobile Army Surgical Hospital (MASH) in the Korean War. During that time after the war, the character had mellowed considerably. He did not merely learn how to stop fighting the system but became a part of it, in a sense, as the Chief of Surgery at San Francisco Memorial Hospital. Trapper shows tremendous compassion toward his patients, often violating "established hospital procedures."

Working with Trapper is an aspiring young professional named Dr. George Alonzo Gates (Gregory Harrison), usually referred to as Gonzo, who has a lot in common with Trapper, having also served in a MASH unit (albeit during the later Vietnam War). His sense of humor and love of life also reflect elements of Trapper's younger days. Gonzo resides in his motor home (dubbed "The Titanic") in the hospital parking lot. 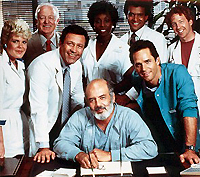 The show also involves several other characters that serve as hospital staff.

The show underwent a number of changes during Trapper John's seventh and final season.

Only nine further irregularly-scheduled episodes of Trapper John were produced after Harrison's departure.

After Harrison's last episode, the show was off the air for three weeks, then brought back on a different night before being pre-empted three times in the next four weeks. A top 30 hit for most of its run, Trapper John, M.D. fell out of the top 30 during season seven, and was canceled by season's end.

The final four episodes were aired late in the summer of 1986, well after the show's cancellation had already been announced.

In a suit filed in New York state court, Ingo Preminger, producer of the 1970 motion picture M*A*S*H, claimed that under his deal with 20th Century Fox, his production company had both the right of first refusal to produce any spin-off of the movie, and the right to fees from the use of the book and film's material. New York State Supreme Court Justice Martin Stecher found that Preminger's agreement with Fox did not give him the right to produce Trapper John M.D., but did entitle him to a 25% share in profits from the show.[1] This decision was later cited by the same court in its 2008 decision in Kellman v. Mosley, involving a claim for royalties involving the Easy Rawlins detective series.[2]

It has sometimes been reported that the producers of the television series M*A*S*H filed suit claiming they were entitled to royalties from the new show, arguing that it was based on the character as portrayed in their series by Wayne Rogers, but the producers of Trapper John, M.D successfully argued that it was based only on the earlier film and Richard Hooker's MASH: A Novel About Three Army Doctors.[3] In fact, these reports appear to be a confused description of Preminger v. Twentieth Century Fox Film Corp.[4] Both TV series were produced under deals with 20th Century Fox Television, and the film was produced by parent company 20th Century Fox.

The pilot includes photos and video clips (part of a dream) taken from the M*A*S*H film and TV series, including a publicity photo of Trapper (as portrayed by Wayne Rogers) and Hawkeye (Alan Alda), and the character mentions Radar and Hawkeye by name. However, none of the other M*A*S*H characters appeared as characters, and references to Trapper's time in Korea were rare.

Wayne Rogers who played Trapper John in M*A*S*H from 1972 to 1975 was offered to reprise the title role but turned it down because he did not want to play a doctor again on television.[5]