"Half-edge" vertex figure of the cube

In geometry, a vertex figure, broadly speaking, is the figure exposed when a corner of a polyhedron or polytope is sliced off.

"Whole-edge" vertex figure of the cube Spherical vertex figure of the cube

Point-set vertex figure of the cube

Take some corner or vertex of a polyhedron. Mark a point somewhere along each connected edge. Draw lines across the connected faces, joining adjacent points around the face. When done, these lines form a complete circuit, i.e. a polygon, around the vertex. This polygon is the vertex figure.

More precise formal definitions can vary quite widely, according to circumstance. For example Coxeter (e.g. 1948, 1954) varies his definition as convenient for the current area of discussion. Most of the following definitions of a vertex figure apply equally well to infinite tilings or, by extension, to space-filling tessellation with polytope cells and other higher-dimensional polytopes.

As a flat slice

Make a slice through the corner of the polyhedron, cutting through all the edges connected to the vertex. The cut surface is the vertex figure. This is perhaps the most common approach, and the most easily understood. Different authors make the slice in different places. Wenninger (2003) cuts each edge a unit distance from the vertex, as does Coxeter (1948). For uniform polyhedra the Dorman Luke construction cuts each connected edge at its midpoint. Other authors make the cut through the vertex at the other end of each edge.[1][2]

For an irregular polyhedron, cutting all edges incident to a given vertex at equal distances from the vertex may produce a figure that does not lie in a plane. A more general approach, valid for arbitrary convex polyhedra, is to make the cut along any plane which separates the given vertex from all the other vertices, but is otherwise arbitrary. This construction determines the combinatorial structure of the vertex figure, similar to a set of connected vertices (see below), but not its precise geometry; it may be generalized to convex polytopes in any dimension. However, for non-convex polyhedra, there may not exist a plane near the vertex that cuts all of the faces incident to the vertex.

As a spherical polygon

Cromwell (1999) forms the vertex figure by intersecting the polyhedron with a sphere centered at the vertex, small enough that it intersects only edges and faces incident to the vertex. This can be visualized as making a spherical cut or scoop, centered on the vertex. The cut surface or vertex figure is thus a spherical polygon marked on this sphere. One advantage of this method is that the shape of the vertex figure is fixed (up to the scale of the sphere), whereas the method of intersecting with a plane can produce different shapes depending on the angle of the plane. Additionally, this method works for non-convex polyhedra.

As the set of connected vertices

Many combinatorial and computational approaches (e.g. Skilling, 1975) treat a vertex figure as the ordered (or partially ordered) set of points of all the neighboring (connected via an edge) vertices to the given vertex.

In the theory of abstract polytopes, the vertex figure at a given vertex V comprises all the elements which are incident on the vertex; edges, faces, etc. More formally it is the (n−1)-section Fn/V, where Fn is the greatest face.

This set of elements is elsewhere known as a vertex star. The geometrical vertex figure and the vertex star may be understood as distinct realizations of the same abstract section.

In general a vertex figure need not be planar.

For nonconvex polyhedra, the vertex figure may also be nonconvex. Uniform polytopes, for instance, can have star polygons for faces and/or for vertex figures.

Vertex figures are especially significant for uniforms and other isogonal (vertex-transitive) polytopes because one vertex figure can define the entire polytope.

For polyhedra with regular faces, a vertex figure can be represented in vertex configuration notation, by listing the faces in sequence around the vertex. For example 3.4.4.4 is a vertex with one triangle and three squares, and it defines the uniform rhombicuboctahedron.

If the polytope is isogonal, the vertex figure will exist in a hyperplane surface of the n-space.

From the adjacent vertices

By considering the connectivity of these neighboring vertices, a vertex figure can be constructed for each vertex of a polytope:

For a uniform polyhedron, the face of the dual polyhedron may be found from the original polyhedron's vertex figure using the "Dorman Luke" construction. The vertex figure of the great icosahedron is a regular pentagram or star polygon {5/2}.

If a polytope is regular, it can be represented by a Schläfli symbol and both the cell and the vertex figure can be trivially extracted from this notation.

An example vertex figure of a honeycomb 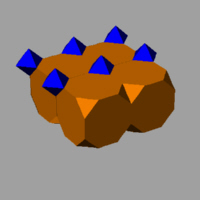 The vertex figure of a truncated cubic honeycomb is a nonuniform square pyramid. One octahedron and four truncated cubes meet at each vertex form a space-filling tessellation.

An edge figure will be a (n−2)-polytope, representing the arrangement of facets around a given edge. Regular and single-ringed coxeter diagram uniform polytopes will have a single edge type. In general, a uniform polytope can have as many edge types as active mirrors in the construction, since each active mirror produces one edge in the fundamental domain.