AVCHD (Advanced Video Coding High Definition)[1] is a file-based format for the digital recording and playback of high-definition video. It is H.264 and Dolby AC-3 packaged into the MPEG transport stream, with a set of constraints designed around the camcorders.

Developed jointly by Sony and Panasonic, the format was introduced in 2006 primarily for use in high definition consumer camcorders.[2] Related specifications include the professional variants AVCCAM and NXCAM.

Favorable comparisons of AVCHD against HDV and XDCAM EX[3][4] solidified perception of AVCHD as a format acceptable for professional use. Both Panasonic and Sony released the first consumer AVCHD camcorders in spring of 2007.[5] Panasonic released the first AVCHD camcorder aimed at the professional market in 2008, though it was nothing more than the (by then discontinued) FLASH card consumer model rebadged with a different model number.

In 2011 the AVCHD specification was amended to include 1080-line 50-frame/s and 60-frame/s modes (AVCHD Progressive) and stereoscopic video (AVCHD 3D). The new video modes require double the data rate of previous modes.

AVCHD and its logo are trademarks of Sony and Panasonic.[6]

Aside from recorded audio and video, AVCHD includes many user-friendly features to improve media presentation: menu navigation, simple slide shows and subtitles. The menu navigation system is similar to DVD-video, allowing access to individual videos from a common intro screen. Slide shows are prepared from a sequence of AVC still frames, and can be accompanied by a background audio track. Subtitles are used in some camcorders to timestamp the recordings.

Audio, video, subtitle, and ancillary streams are multiplexed into an MPEG transport stream and stored on media as binary files. Usually, memory cards and HDDs use the FAT file system, while optical discs employ UDF or ISO 9660.

At the file system level, the structure of AVCHD is derived from the Blu-ray Disc specification, but is not identical to it. In particular, it uses legacy "8.3" file naming convention, while Blu-ray Discs utilize long filenames (this may be caused by the fact that FAT implementations utilizing long file names are patented by Microsoft and are licensed on a per unit sold basis[7]). Another difference is location of the BDMV directory, which contains media files. On a DVD-based camcorder the BDMV directory is placed at the root level, as on the Blu-ray Disc. On the HDD-based Canon HG10 camcorder the BDMV directory is located in the AVCHD directory, which is placed at the root level.[8] Solid-state Panasonic and Canon camcorders nest the AVCHD directory inside the PRIVATE directory.[9] Following a standard agreed upon by many still camera manufacturers, solid-state camcorders have a root-level DCIM directory for still images.[10]

AVCHD is compatible with the Blu-ray format[2] and can be authored without re-encoding on Blu-rays or DVDs, though not all Blu-ray Disc players are compatible with AVCHD video authored on DVD media, a format known as AVCHD disc.

AVCHD recordings can be transferred to a computer by connecting the camcorder via the USB connection. Removable media like SDHC and Memory Stick cards or DVDs can be read on a computer directly. Copying files from an AVCHD camcorder or from removable media can be performed faster than from a tape-based camcorder, because the transfer speed is not limited by realtime playback.

An example of interlace combing

Most AVCHD camcorders support only a handful of the video and audio formats allowed in the AVCHD standard.

AVCHD-SD is used in the shoulder-mount Panasonic HDC-MDH1,[11] as well as on its North American AG-AC7 cousin. A successor model - the AG-AC8, is also capable of recording in AVCHD-SD mode.[12] Several models from JVC like the consumer camcorders GZ-HM650, GZ-HM670 and GZ-HM690 as well as the professional camcorder JVC GY-HM70[13] can record AVCHD-SD video. AVCHD-SD is not compatible with consumer DVD players, because it employs AVC video encoding instead of MPEG-2 Part 2. AVCHD-SD can be played on a Blu-ray Disc player without re-encoding.

Interlaced video had been originally designed for watching on a cathode-ray tube television set. Material recorded for interlaced presentation may exhibit combing or ghosting when it is rescaled, filmed out or watched on a computer or another progressive-scan device without proper deinterlacing.

Some AVCHD 1080i camcorders can capture progressive video and record it within interlaced stream borrowing techniques from television industry. In particular, Progressive segmented frame (PsF) is utilized in some Panasonic (25p Digital Cinema), Canon (PF25, PF30) and Sony camcorders. The 2:3 pulldown technique is used in some 60 Hz versions of Canon (PF24) and Panasonic (24p Digital Cinema) camcorders for recording 24-frame/s progressive video. Most editing tools treat progressive video recorded within an interlaced stream as interlaced, though some editing systems and most standalone Blu-ray Disc players are capable of recognizing the pulldown pattern to recover the original frames using the process known as inverse telecine.

Since the very beginning, the AVCHD specification had supported 720-line progressive recording mode at frame rates of 24 and 60 frames/s for 60 Hz models and 50 frames/s for 50 Hz models. Frame rates of 25 frames/s and 30 frames/s are not directly available in 720p mode, but can be simulated with frame repeating, when every frame is either repeated twice or a special flag in the video stream instructs a decoder to play every frame twice to adhere to output rate of 50 or 60 frames/s.

Many of the digital compact cameras made by Panasonic, such as the DMC-ZS3/DMC-TZ7, DMC-FT1, DMC-FZ35/DMC-FZ38, and DMC-ZS-7/TZ-10 offer 720p video recording with effective frame rate of 25 or 30 frames/s in a format called AVCHD Lite (see below).

Until the advent of AVCHD Progressive mode, native progressive-scan video for 1080-line resolution had been available only in 24 frames/s variant. In 2010, Panasonic introduced a new lineup of consumer AVCHD camcorders with 1080-line 50p/60p progressive-scan mode (frame rate depending on region).[14] Panasonic advised that not all players that support AVCHD playback could play 1080-line 50p/60p video.[15] In 2011, this mode was officially included into the AVCHD specification as part of 2.0 addendum, and has been called AVCHD Progressive. This mode uses the same AVCHD folder structure and container files for storing video, with the maximum bitrate of 28 Mbit/s. In 2011, Sony introduced consumer and professional AVCHD models capable of AVCHD Progressive recording. In 2012 JVC announced the GY-HMQ10 model, which also can record AVCHD Progressive video. When the AVCHD standard was first announced, recordable DVD was the only recording medium.[2] To reduce camcorder size, manufacturers opted for an 8 cm disc, sometimes called miniDVD. Recording capacity of an 8 cm disc ranges from 1.4 GB for a single-sided single layer disc to 5.2 GB for a double-sided double layer disc.

As the capacity of memory cards grew and their price dropped, DVDs use for recordable media declined. No DVD-based AVCHD camcorders have been produced since 2008. While DVDs are no longer used for acquisition, they remain popular as distribution media. Many authoring programs offer "AVCHD" profile for recording high definition video on a DVD. Such AVCHD discs are incompatible with regular DVD-Video players, but play in many Blu-ray Disc players. A conventional single-layer 12 cm DVD can store 35 minutes of video recorded at the maximum bitrate the AVCHD specification allows for DVD media—18 Mbit/s.

A hard disk drive was added as an optional recording medium to AVCHD specification shortly after the new video standard had been announced.[17] Presently, capacity of built-in HDDs ranges from 30 GB to 240 GB.

Panasonic and Sony chose removable flash memory as the sole type of recording media in their professional AVCHD lineups, specifically AVCCAM and NXCAM.

Some AVCHD camcorders come with built-in solid-state memory either as a sole media, or in addition to other media.

Panasonic and Sony developed several brand names for their professional as well as simplified versions of AVCHD.

AVCHD Lite is a subset of AVCHD format announced in January 2009,[20] which is limited to 720p60, 720p50 and 720p24 and does not employ Multiview Video Coding.[21] AVCHD Lite cameras duplicate each frame of 25fps/30fps video acquired by camera sensor,[22] producing 720p50/720p60 bitstream compliant with AVCHD and Blu-ray Disc specifications. As of 2013, AVCHD Lite seems to have been all but replaced with other formats. For example, the Panasonic DMC FZ-200 offers AVCHD Progressive recording mode (50fps/60fps acquisition and stream rate) as well as MP4 mode (25fps/30fps acquisition and stream rate).[23]

Formerly known as "AVCHD with professional features,"[24] AVCCAM is the name of professional AVCHD camcorders from Panasonic's Broadcast division. Some of these professional features listed in early Panasonic advertising materials included 1/3-inch progressive 3CCD sensor, XLR microphone input, solid-state media and capability of recording at the maximum AVCHD bitrate - 24 Mbit/s. The aforementioned features are not exclusive to AVCCAM. Moreover, some of these features like CCD sensor technology have been dropped by Panasonic, while 24 Mbit/s recording rate is widely available from rival manufacturers even on consumer models.

Recorded AVCHD video can be played back in a variety of ways: 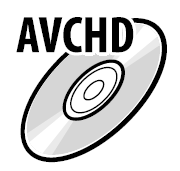 A DVD disc with AVCHD high-definition video recorded on it is sometimes called an AVCHD disc.[29][30] AVCHD discs cannot be played in a standard DVD player, but can be played in many Blu-ray Disc players.[2] Smooth playback is not guaranteed if overall data rate exceeds 18 Mbit/s. It is possible to create simple menus similar to menus used for DVD-video discs.

AVCHD content can also be recorded on SDHC cards and played by many television sets, Blu-ray Disc players and media consoles.

The 1080-line 50p/60p AVCHD Progressive recording mode employed in some camcorders, is not compliant with the current Blu-ray Disc specification, though many current player models unofficially support it if they support AVCHD format.

In 2009 Panasonic introduced AVCHD Lite and AVCHD to selected members of its Lumix line of digital cameras:

* to avoid European specific tax, Panasonic digital cameras for this market are limited to 30 minutes recording.

Consumer Sony AVCHD camcorders released before 2011 could record 1080-line interlaced video only, while the prosumer HDR-AX2000 and professional HXR-NX5 cameras were capable of recording in interlaced and progressive formats.[57] In 2010, Sony introduced AVCHD to selected members of its Cybershot line of digital cameras.

The following video-editing software features support for the AVCHD format:

This section is missing information about AVCCAM and NXCAM. Please expand the section to include this information. Further details may exist on the talk page. (July 2019)