There are several types, ranging from pocket to XXL in size and weight. Temperament in adult dogs is very much dependent on training, and the breed can be very demanding and needs to be properly trained.

The American Bully, as it is now known, began development in the 1980s with the majority of the final behavioral and aesthetic product being completed in the 1990s.[2] There is consensus that at least five other breeds were used to attain the more "bully" physical traits desired as well as the more diminutive size of some lines.[3] The American Pit Bull Terrier (APBT) was the foundation (parent breed) used to create the American Bully.[1] The APBT has maintained a characteristic appearance and temperament for over a century.[1] Within that span of time different strains of APBT emerged within the breed, each with different physical attributes.[1] One particular APBT strain was crossbred to create a specific, stockier, physique that breeders originally misrepresented as purebred American Pit Bull Terriers. Eventually, enough breeders agreed that these dogs were disparate enough from American Pit Bull Terriers that it warranted them admitting that they were different breed altogether.[1] The bloodline of these mixed breeds were further influenced with further, openly acknowledged breeding to the American Bulldog, English Bulldog, and Olde English Bulldogge in order to fine-tune desired physical characteristics and personality traits.[1]

The breed was first recognized by its breed club, the American Bully Kennel Club (ABKC), in 2004.[4] This registry first acted as a means to document pedigrees and show the breed against its written standard. According to the ABKC the initial desire for this breed was to produce a dog with a lower prey drive and more of the "bully" traits and characteristics than the American Staffordshire Terrier. Mass and heavy bone was prioritized to ensure such a look, and due to this many of the dogs shown today display the wide front for which they were originally bred.[4]

The breed's development and popularity are commonly tied to the growth of hip-hop culture.[5] The American Bully should not be confused with the several other bulldog-type breeds.[1][4]

Within the ABKC, the four varieties are separated by height without specification of weight. All these varieties are expected to follow the same standard with minor alterations.[4]

All dogs are classified and shown as Standard until they reach a year of age, at which point they are separated into the varieties and shown against their own type. 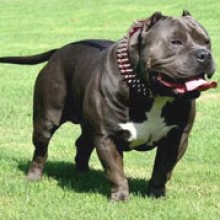 Standard type in side view The classic is a lighter-framed dog than the standard, but falls within the same height range. These dogs do not display the exaggerated features often found in the other varieties, and arguably display clearer American Pit Bull Terrier/American Staffordshire Terrier lineage.[6][better source needed]

Outside of the breed standard, dogs shorter or taller than the named variations have been bred. Smaller dogs are sometimes called "Micro", and larger ones are called "XXL", but neither are recognized by the kennel clubs as legitimate varieties.

The American Bully is a highly adaptable and trainable breed.[7] Many dogs, despite acting as lapdogs in the home, do well in sports such as weight pull and flirt pole. Human aggression is discouraged in breed standards, however a level of dog aggression is characteristic of the breed.[1] Breeders have acknowledged that American Bully dogs can be very dangerous if improperly raised or bred.[8] On July 16, 2022, Joanne Robinson of Rotherham, England, was killed in her own home when she was attacked by her pet American Bully XL. The dog, one of a pair, was reputed to weigh 196 lb (89 kg).[9] Furthermore, on August 10 of the same year, another attack by the breed against a person was reported. Ian Symes, an experienced and professional dog-walker, was mauled to death while walking through a park in Fareham, Hampshire.[10]

Health problems vary within the breed and span the entire spectrum, with some varieties being plagued by problems, and others being well-documented for health and quality.[17] Testing is not as commonplace in the breed as in older breeds, though hip and elbow scoring are the most frequently conducted. Cherry eye, ectropion, and entropion are often seen affecting the eyes, while Brachycephalic Respiratory Syndrome can be seen in the shorter muzzled dogs.

In Turkey, it is illegal to own and breed an American Bully.[18]