Chord that contains the interval of an augmented sixth

In music theory, an augmented sixth chord contains the interval of an augmented sixth, usually above its bass tone. This chord has its origins in the Renaissance,[2] was further developed in the Baroque, and became a distinctive part of the musical style of the Classical and Romantic periods.[3]

Conventionally used with a predominant function (resolving to the dominant), the three more common types of augmented sixth chords are usually called the Italian sixth, the French sixth, and the German sixth.

The interval of the augmented sixth normally resolves outwards by semitone to an octave.

The augmented sixth interval is typically between the sixth degree of the minor scale, ♭

, and the raised fourth degree, ♯

. With standard voice leading, the chord is followed directly or indirectly by some form of the dominant chord, in which both ♭

have resolved to the fifth scale degree,

. This tendency to resolve outwards to

is why the interval is spelled as an augmented sixth, rather than enharmonically as a minor seventh (♭

Although augmented sixth chords are more common in the minor mode, they are also used in the major mode by borrowing ♭

of the parallel minor scale.[4]

There are three main types of augmented sixth chords, commonly known as the Italian sixth, the French sixth, and the German sixth.

Though each is named after a European nationality, theorists disagree on their precise origins and have struggled for centuries to define their roots, and fit them into conventional harmonic theory.[4][5][6] According to Kostka and Payne, the other two terms are similar to the Italian sixth, which, "has no historical authenticity-[being] simply a convenient and traditional label."[7]

The Italian sixth (It+6 or It6 or ♯iv6) is derived from iv6 with an altered fourth scale degree, ♯

. This is the only augmented sixth chord comprising just three distinct notes; in four-part writing, the tonic pitch is doubled.

The French sixth (Fr+6 or Fr4
3) is similar to the Italian, but with an additional tone,

. The notes of the French sixth chord are all contained within the same whole tone scale, lending a sonority common to French music in the 19th century (especially associated with Impressionist music).[10]

This chord has the same notes as a dominant seventh flat five chord and is in fact the second inversion of II7♭5.

The German sixth (Ger+6 or Ger6
5) is also like the Italian, but with an added tone, ♭

In Classical music, however, it appears in much the same places as the other variants, though perhaps less often because of the contrapuntal difficulties outlined below. It appears frequently in the works of Beethoven,[a] and in ragtime music.[1] The German sixth chord is enharmonically equivalent to a dominant seventh chord though it functions differently.

It is more difficult to avoid parallel fifths when resolving a German sixth chord to the dominant chord. These parallel fifths, referred to as Mozart fifths, were occasionally accepted by common practice composers. There are two ways they can be avoided:

Other variants of augmented sixth chords can be found in the repertoire, and are sometimes given whimsical geographical names. For example: 4–♭6–7–♯2; (F–A♭–B–D♯) is called by one source an Australian sixth, and ♭7–1–3–♯5 (B♭–C–E–G#), sometimes called the Japanese sixth[13][14] Such anomalies usually have alternative interpretations.

From the Baroque to the Romantic periods, augmented sixth chords had the same harmonic function: as a chromatically altered predominant chord (typically, an alteration of ii4
3, IV6
5, vi7 or their parallel equivalents in the minor mode) leading to a dominant chord. This movement to the dominant is heightened by the semitonal resolution to

from above and below (from ♭

, the leading-tone of V, in both chords. In the major mode, the chromatic voice leading is more pronounced because of the presence of two chromatically altered notes, ♭

, rather than just ♯

In most occasions, the augmented-sixth chords precede either the dominant, or the tonic in second inversion.[8] The augmented sixths can be treated as chromatically altered passing chords.[8]

Augmented sixths as dominants in C major, according to Tchaikovsky. Notice the early resolution of an inner voice to avoid parallel fifths in the last example.[17]

In the late Romantic period and other musical traditions, especially jazz, other harmonic possibilities of augmented sixth variants and sonorities outside its function as a predominant were explored, exploiting their particular properties. An example of this is through the "reinterpretation" of the harmonic function of a chord: since a chord could simultaneously have more than one enharmonic spelling with different functions (i.e., both predominant as a German sixth and dominant as a dominant seventh), its function could be reinterpreted mid-phrase. This heightens both chromaticism by making possible the tonicization of remotely related keys, and possible dissonances with the juxtaposition of remotely related keys.

), and accordingly resolving into the tonic. He notes that, "some theorists insist upon [augmented sixth chord's] resolution not into the tonic but into the dominant triad, and regard them as being erected not on the altered 2nd degree, but on the altered 6th degree in major and on the natural 6th degree in minor", yet calls this view, "fallacious", insisting that a, "chord of the augmented sixth on the 6th degree is nothing else than a modulatory degression into the key of the dominant".[17]

The example below shows the last nine measures from Schubert's Piano Sonata in A major, D. 959. In m. 352, an Italian sixth chord built on scale degree ♭

functions as a substitute for the dominant.

Augmented sixth chords are occasionally used with a different chord member in the bass. Since there is no consensus among theorists that they are in root position in their normal form, the word "inversion" isn't necessarily accurate, but is found in some textbooks, nonetheless.[citation needed] Sometimes, "inverted" augmented sixth chords occur as a product of voice leading.

Rousseau considered that the chord could not be inverted.[19] Seventeenth century instances of the augmented sixth with the sharp note in the bass are generally limited to German sources.[20]

The excerpt below is from J.S. Bach's Mass in B minor. At the end of the second measure, the augmented sixth is inverted to create a diminished third or tenth between the bass and the soprano (C♯–E♭); these two voices resolve inward to an octave. 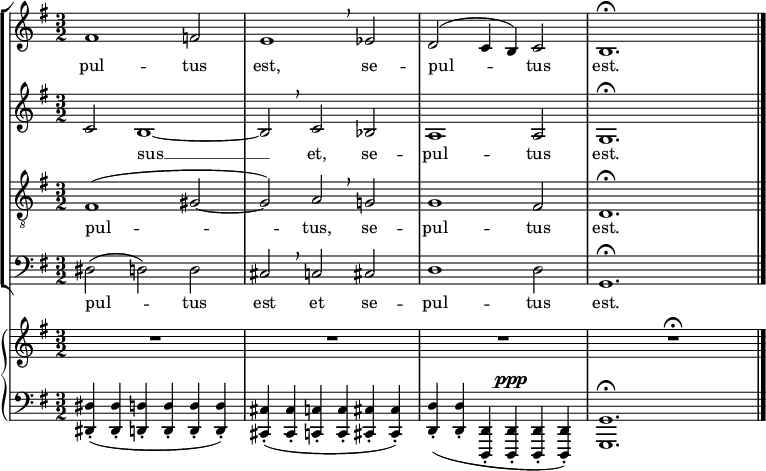 In music theory, the double-diminished triad is an archaic concept and term referring to a triad, or three note chord, which, already being minor, has its root raised a semitone, making it "doubly diminished". However, this may be used as the derivation of the augmented sixth chord.[21] For example, F–A♭–C is a minor triad, so F♯–A♭–C is a doubly diminished triad. This is enharmonically equivalent to G♭–A♭–C, an incomplete dominant seventh A♭ 7, missing its fifth), which is a tritone substitute that resolves to G. Its inversion, A♭–C–F♯, is the Italian sixth chord that resolves to G.

Classical harmonic theory would notate the tritone substitute as an augmented sixth chord on ♭2. The augmented sixth chord can either be (i) an It+6 enharmonically equivalent to a dominant seventh chord (with a missing fifth); (ii) a Ger+6 equivalent to a dominant seventh chord with (with a fifth); or (iii) a Fr+6 equivalent to the Lydian dominant (with a missing fifth), all of which serve in a classical context as a substitute for the secondary dominant of V.[22][23]

Simon Sechter explains the chord of the French sixth chord as being a chromatically altered version of a seventh chord on the second degree of the scale,

. The German sixth is explained as a chromatically altered ninth chord on the same root but with the root omitted.[24]

The tendency of the interval of the augmented sixth to resolve outwards is therefore explained by the fact that the A♭, being a dissonant note, a diminished fifth above the root (D), and flatted, must fall, whilst the F♯ – being chromatically raised – must rise.

Relationship between the different types

The following "curious chromatic sequence",[25] graphed by Dmitri Tymoczko as a four-dimensional tesseract,[26] outlines the relationships between the augmented sixth chords in 12TET tuning:

A tesseract. The diminished seventh chords occupy points on two diagonally opposite corners.

The minor seventh chord may also have its interval of minor seventh (between the root and seventh degree (i.e.: C–B♭ in C–E♭–G–B♭) rewritten as an augmented sixth (C–E♭–G–A♯).[27] Rearranging and transposing, this gives A♭–C♭–E♭–F♯, a virtual minor version of the German sixth chord.[28] Again like the typical +6, this enharmonic interpretation gives a resolution irregular for the minor seventh but normal for the augmented sixth, where the two voices at the enharmonic major second converge to a unison or diverge to an octave.[29]

The half-diminished seventh chord is the inversion of the German sixth chord[30] (it is its inversion as a set, rather than as a chord). Its interval of minor seventh (between root and seventh degree (i.e.: C–B♭ in C–E♭–G♭–B♭) can be written as an augmented sixth (C–E♭–G♭–A♯).[27] Rearranging and transposing, this gives A♭–C♭–D–F♯, a virtual minor version of the French sixth chord.[31][need quotation to verify] Like the typical +6, this enharmonic interpretation gives a resolution irregular for the half-diminished seventh but normal for the augmented sixth, where the two voices at the enharmonic major second converge to a unison or diverge to an octave.[29]

Richard Wagner's Tristan chord, the first vertical sonority in his opera, Tristan und Isolde, can be interpreted as a half-diminished seventh that transitions to a French sixth in the key of A minor (F–A–B–D♯, in red below). The upper voice continues upward with a long appoggiatura (G♯ to A). Note that the D♯ resolves down to D♮ instead of up to E:[32]