Geographical region of the USA
This article needs additional citations for verification. Please help improve this article by adding citations to reliable sources. Unsourced material may be challenged and removed.Find sources: "Central United States" – news · newspapers · books · scholar · JSTOR (November 2009) (Learn how and when to remove this template message) 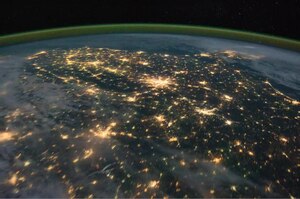 This video was taken by the crew of Expedition 29 on board the ISS. The pass begins over Canada and ends in the Caribbean Sea, covering the entire Central United States.

The Central United States is sometimes conceived as between the Eastern and Western as part of a three-region model, roughly coincident with the U.S. Census' definition of the Midwestern United States plus the western and central portions of the U.S. Census' definition of the Southern United States. The Central States are typically considered to consist of North Dakota, South Dakota, Nebraska, Kansas, Oklahoma, Texas, Minnesota, Iowa, Missouri, Arkansas, Louisiana, Wisconsin, Illinois, Michigan, Indiana, Ohio, Kentucky, Tennessee, West Virginia, Mississippi and Alabama.[citation needed]

Four of nine Census Bureau Divisions have names containing "Central", though they are not grouped as a region. They include 20 states and 39.45% of the U.S. population as of July 1, 2007.[1]

Almost all of the area is in the Gulf of Mexico drainage basin and most of that is in the Mississippi Basin. Small waterways near the Great Lakes drain into the Great Lakes, and eventually the St. Lawrence River. The Red River Basin is centered on the North Dakota-Minnesota border and drains to Hudson Bay. Floods have been a problem for the region during the 20th and early 21st century.[2]

The Central Time Zone includes portions of the Florida Panhandle, upper portions of Michigan, parts of Indiana, western Kentucky, western Tennessee, all of Texas except El Paso, and extends to the westernmost fringes of Great Plains states.[citation needed]

Different organizations define the central regions of the United States in a variety of ways:

Geographic center of the United States

The geographic midpoint of the contiguous 48 states of the United States falls within the boundaries of the Central United States and is located about two miles northwest of Lebanon, Kansas. The spot is located at 39 degrees 50 minutes latitude and 98 degrees 35 minutes longitude.[3]