Charles Louis Brown (August 22, 1936 – May 16, 2012) was an American guitarist, bandleader and singer who garnered the honorific nickname "The Godfather of Go-Go".[1] Go-go is a subgenre of funk music developed around the Washington, D.C. metropolitan area in the mid-1970s. While its musical classification, influences, and origins are debated, Brown is regarded as the fundamental force behind the creation of go-go music.[2][3]

Brown was born on August 22, 1936 in Gaston, North Carolina.[4] Brown's mother, Lyla Brown, was a housekeeper, and his father, Albert Louis Moody, was a United States Marine. Brown's father, however, was not present in his life, and Brown lived in poverty.[4][5] When Brown was six years old, he moved to Washington, D.C., and at 15 he started living on the streets.[6] He did not graduate high school; after quitting school he decided to perform odd jobs to make money,[7] including shining shoes.[8]

In the 1950s, Brown was convicted of murder and served eight years in Lorton Correctional Complex. At first, the case was tried as aggravated assault; however, it was moved up to murder once the victim died. Brown stated that his actions were in self-defense.[7] In prison, he traded cigarettes for a guitar, which was how his love for the instrument began.[7] When Brown completed his sentence, he moved back to Washington, D.C. and worked as a truck driver, a bricklayer, and a sparring partner at multiple boxing gyms. He also started to perform at parties throughout the area; however, he could not play at venues that served liquor, because his probation officer would not allow it.[7] 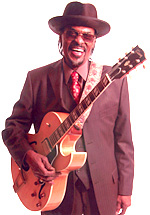 Brown's musical career began in the 1960s playing guitar with Jerry Butler and The Earls of Rhythm, joining Los Latinos in 1965. At the time of his death he was still performing music and was well known in the Washington, D.C., area. Brown's early hits include "We Need Some Money" and "Bustin' Loose". "Bustin' Loose" has been adopted by the Washington Nationals baseball team as its home run celebration song, and was interpolated by Nelly for his 2002 number one hit "Hot in Herre." Brown also recorded go-go covers of early jazz and blues songs, such as "Go-Go Swing" Duke Ellington's "It Don't Mean a Thing If Ain't Got That Swing", "Moody's Mood for Love", Johnny Mercer's "Midnight Sun", Louis Jordan's "Run Joe", and T-Bone Walker's "Stormy Monday".

The song "Ashley's Roachclip" from the 1974 album Salt of the Earth by Brown's band The Soul Searchers[9] contains a drum break, sampled countless times in various other tracks.[10]

In the mid-1990s, he performed the theme music of Fox's sitcom The Sinbad Show which later aired on The Family Channel and Disney Channel. He appeared in television advertisements for The Washington Post and other Washington, D.C., area companies. The D.C. Lottery's "Rolling Cash 5" ad campaign featured Chuck Brown singing his 2007 song "The Party Roll" in front of various D.C. city landmarks such as Ben's Chili Bowl.

Brown died on May 16, 2012, at Baltimore's Johns Hopkins Hospital of multiple organ failure, including heart failure, at the age of 75. Several weeks prior to his death, he had postponed and cancelled shows due to hospitalisation for pneumonia.[1][12] His interment was at Trinity Memorial Gardens in Waldorf, Maryland.

"Chuck [Brown] was like the Washington Monument. He was like Ben's Chili Bowl. He was the big chair. He was all of that. Chuck Brown was Washington, D.C. [ ...] People feel you when it's genuine, and Chuck was always that."

Brown is called the "Godfather of Go-Go"[4][14] and was considered a local legend in Washington, D.C. Darryl Brooks, a local promoter who worked with Chuck Brown during his career, stated, "He was a symbol of D.C. manhood, back in the day, because of the authority that he spoke with. He just spoke from a perspective that black men could understand."[13] Andre Johnson, the leader of the go-go band Rare Essence, said that Chuck Brown "influenced generations of people—not just one—a few generations of musicians around here."[13] Washington, D.C. Mayor Vincent C. Gray said Brown was "Go-go's creator and, arguably, its most legendary artist."[15]

The Soul Rebels Brass Band, Rare Essence and Slick Rick performed a tribute concert and collaborated on June 21, 2012 in Washington DC at the historic Howard Theatre which re-opened in April 2012.[16]

Brown was a recipient of a 2005 National Heritage Fellowship awarded by the National Endowment for the Arts, which is the United States' highest honor in the folk and traditional arts.[22]

In 2009, the 1900 block of 7th Street NW, in Northwest Washington, D.C., between Florida Avenue and T Street was renamed Chuck Brown Way in his honor.

He received his first Grammy Award nomination in 2011 for Best R&B Performance By A Duo Or Group With Vocals for "Love" (with Jill Scott and Marcus Miller), from the album We Got This.[23]

On September 4, 2011, Brown was honored by the National Symphony Orchestra, as the NSO paid tribute to Legends of Washington Music Labor Day concert - honoring Brown's music, as well as Duke Ellington and John Philip Sousa - with a free concert on the West Lawn of the Capitol. Brown and his band capped off the evening with a performance.