David Earle Lopes (/ˈloʊps/; born May 3, 1945) is an American former second baseman and manager in Major League Baseball (MLB). He batted and threw right-handed. He played in MLB for the Los Angeles Dodgers, Oakland Athletics, Chicago Cubs, and Houston Astros; he managed the Milwaukee Brewers.

Lopes was drafted by the Los Angeles Dodgers in the 2nd round of the 1968 MLB January Draft. Previously, he had played in high school at La Salle Academy and in college for Iowa Wesleyan College and Washburn University. He had previously been drafted by the San Francisco Giants in the 8th round of the 1967 MLB Draft but did not sign.

When Lopes started his career in the Dodger organization, he was an introvert, reserved and quiet. Tommy Lasorda encouraged him to assert himself more. According to Tommy John, "And as his confidence grew, Dave did just that, becoming outspoken, a catalyst, a leader. He was a guy whose blazing speed made things happen on the field and whose personality made things happen in the clubhouse. When something needed to be said to a teammate, even if it was critical, Lopes would be the guy to say it."[1] Lasorda was also responsible for converting Lopes from an outfielder into a second baseman.[1] 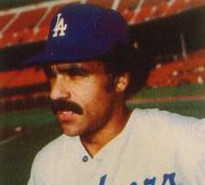 Lopes with the Dodgers

Lopes spent nine seasons with the Los Angeles Dodgers as their regular second baseman. Along with Steve Garvey (1B), Bill Russell (SS) and Ron Cey (3B), which stayed together for eight and a half seasons.[5]

Used in the leadoff role most of his career, Lopes was one of the most effective base stealers in baseball's modern era.[6] His 557 career stolen bases rank 26th all-time, but his success rate of 83.01% (557 steals in only 671 attempts) ranks 3rd-best all time among players with 400 or more career stolen bases (behind Tim Raines and Willie Wilson). In 1975, Lopes stole 38 consecutive bases without getting caught, breaking a 53-year-old record set by Max Carey.[7] Lopes' record was later broken by Vince Coleman in 1989. Lopes led the National League with 77 steals in 1975, and again with 63 the following season.

A rare blend of speed and power, Lopes hit a career-high 28 home runs in 1979, becoming one of only seven second basemen in NL history to have hit that many home runs in a season (Rogers Hornsby, Davey Johnson, Jeff Kent, Ryne Sandberg, Juan Samuel and Chase Utley are the others). He also hit 17 twice (1978 and 1983), appeared in four consecutive All-Star games from 1978 to 1981, played in one Division Series, six NLCS and four World Series, including as a member of the 1981 World Champion Dodgers. Arguably Lopes' best World Series was against the Yankees in 1978, when he hit three home runs and seven RBIs.

Following his retirement as a player, Lopes coached first base for the Baltimore Orioles from 1992 to 1994 and the San Diego Padres from 1995 to 1999. Lopes was hired as the Milwaukee Brewers manager in 2000 following Bud Selig's recommendation to hire a manager with a minority background.[8]

In 2001 Lopes was the target of controversy following statements he made regarding stolen-base king Rickey Henderson. Managing a game for the Milwaukee Brewers, Lopes was enraged that Henderson had stolen second base in the seventh inning, while Henderson's Padres held a seven-run lead. Lopes said that this violated an unwritten rule against "showing up" the opposing team. Lopes was quoted, "He was going on his ass. We were going to drill him."[9] However, Henderson was removed from the game. Afterwards, Lopes said "Somebody might not be as lenient as I was, and drill the hitter that's next to him [in the lineup]." The day after, the Elias Sports Bureau produced a list of the seven times in Davey Lopes' playing career that he had stolen a base while his team was leading by seven or more runs.[10]

Tired of the Brewers' continued poor performance and Lopes' media and field antics, club management fired him as manager fifteen games into the 2002 season.[11] He was 144-195 in 3 seasons with the Brewers.[12]

Lopes rejoined the Padres as first base coach from 2003 to 2005 and then held the same position with the Washington Nationals in 2006 and the Philadelphia Phillies from 2007 to 2010.

In each of his Lopes' three seasons with the Phillies, the team led the majors in stolen base percentage, including the best in MLB history in 2007 – 87.9% (138-for-157). They finished second or third in total steals each of those seasons.[13]

Lopes decided to retire from coaching after the 2017 season.[15]

Defensively, Lopes recorded an overall .977 fielding percentage. His primary position was second base, but also played all three outfield positions, third base and shortstop. In 50 postseason games, he posted a .238 batting average (43-for-181) with 29 runs, 3 doubles, 3 triples, 6 home runs, 22 RBI, 19 stolen bases and 25 walks.

Lopes was diagnosed with prostate cancer following a routine physical in February 2008.[17]

He is of Cape Verdean descent.

Has a Recreation Center named after him in Providence RI