Making two outs during the same play in baseball After stepping on second base, Pittsburgh Pirates infielder Max Moroff throws to first base to complete a double play as Baltimore Orioles baserunner Seth Smith slides into the base

In baseball and softball, a double play (denoted as DP in baseball statistics) is the act of making two outs during the same continuous play. Double plays can occur any time there is at least one baserunner and fewer than two outs.

The simplest scenario for a double play is a runner on first base with less than two outs. In that context, five example double plays are:

Double plays can occur in many ways in addition to these examples, and can involve many combinations of fielders. A double play can include an out resulting from a rare event, such as interference or an appeal play.

Per standard baseball positions, the examples given above are recorded, respectively, as:

In baseball slang, making a double play is referred to as "turning two" or a "twin killing" (a play on "twin billing", a moviehouse offering two features on the same ticket). Double plays are also known as "the pitcher's best friend" because they disrupt offense more than any other play, except for the rare triple play. A force double play made on a ground ball hit to the third baseman, who throws to the second baseman, who then throws to the first baseman, is referred to as an "around the horn" double play.

The ability to "make the pivot" on a force double play – receiving a throw from the third base side, then quickly turning and throwing to first base – is a key skill for a second baseman.

Tinker to Evers to Chance

The most famous double play trio—although they never set any records—were Joe Tinker, Johnny Evers and Frank Chance, who were the shortstop, second baseman and first baseman, respectively, for the Chicago Cubs between 1902 and 1912.[4] Their double play against the New York Giants in a 1910 game inspired Giants fan Franklin Pierce Adams to write the short poem Baseball's Sad Lexicon, otherwise known as Tinker to Evers to Chance, which immortalized the trio.[5] All three players were part of the Cubs team that won the National League pennant in 1906, 1907, 1908, and 1910, and the World Series in 1907 and 1908, turning 491 double plays on the way.[6] They were elected to the National Baseball Hall of Fame in 1946.[5] 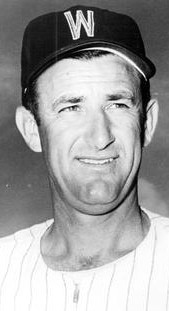 Mickey Vernon was part of 2044 double plays in his 20-year career.