Nettles was one of the best defensive third basemen of all time, and despite his relatively low career batting average, he was an excellent offensive contributor, setting an American League record for career home runs by a third baseman. His 68.0 Wins Above Replacement (WAR) is the highest among all players with a batting average of .250 or lower.[1]

As a part of four pennant-winning Yankee teams, Nettles enjoyed his best season in 1977 when he won the Gold Glove Award and had career-highs in home runs (37) and runs batted in (107) in leading the Yankees to the World Series against the Los Angeles Dodgers.

Nettles was born and raised in San Diego, California. Nettles' unusual first name derives from his mother's dislike of the names Greg and Craig – and her combining the two to produce "Graig." "My dad was away at the war, so he didn't have any say."[2] The name also led to confusion for baseball card companies; the error-prone inaugural 1981 Fleer baseball card set includes an error card where his name is spelled "Graig" on the front, and "Craig" on the back.

Nettles graduated from San Diego High School in 1962 then attended San Diego State College on a basketball scholarship.[3] and played for both the Aztecs' basketball and baseball teams.[4] In 1964 and 1965, he played collegiate summer baseball for the Alaska Goldpanners of the Alaska Baseball League, helping to lead the team to two league championships.

The Minnesota Twins drafted Nettles in the fourth round of the 1965 Major League Baseball draft. He made his MLB debut with the Twins on September 6, 1967. Nettles batted .222 in 96 games with the Twins in 1969.[5]

On December 10, 1969, the Twins traded Nettles with Dean Chance, Ted Uhlaender, and a player to be named later (PTBNL) to the Cleveland Indians for Luis Tiant and Stan Williams.[6] After playing three seasons with the Indians, Nettles was acquired with Jerry Moses by the New York Yankees for John Ellis, Charlie Spikes, Rusty Torres and Jerry Kenney at the Winter Meetings on November 27, 1972.[7][8] The Indians traded Nettles due to a feud between Nettles and manager Ken Aspromonte.[9]

Nettles was named the AL player of the month for April 1974, as he set the AL record for home runs in a month with 11.[10] On September 7, 1974, Nettles was caught using a bat that had six superballs inside it. He said that he had received the bat from a Yankees fan in Chicago and did not know that the bat had been altered.[11]

On September 14, 1974, Nettles and his brother Jim homered in the same game, joining a select club that includes Bret and Aaron Boone, José and Héctor Cruz, Felipe and César Crespo, Al and Tony Cuccinello, Joe and Dom DiMaggio, and Rick and Wes Ferrell. The seven sets of brothers hit their homers playing for opposing teams.

Nettles was named the starting third baseman for the AL in the 1975 MLB All-Star Game.[12]

During a brawl in a game against the Boston Red Sox on May 20, 1976, Nettles, who was on second base at the onset of the brawl, tackled Boston pitcher Bill Lee from behind. When it appeared that the dust had settled and the brawl was over, Lee confronted Nettles for tackling him from behind. The fracas resumed when Nettles swung at Lee. More players joined in the fray and Nettles broke Lee's collarbone when they went down in the pile.[13] Despite the incident, Nettles was not suspended and went on to lead the American League with 32 home runs. 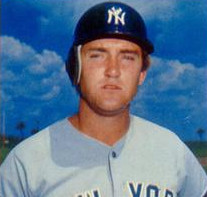 Nettles enjoyed his best season in 1977, when he picked up his first of two Gold Glove Awards, and crushed 37 homers and 107 RBI in helping lead the Yankees to a World Series win over the Dodgers. The following season, Nettles earned his second Gold Glove to help the Yankees bring back-to-back World Series championships to the Bronx.

During Game 3 of the 1978 World Series against the Los Angeles Dodgers at Yankee Stadium, with the Dodgers leading the series two games to none, Nettles made several plays at the hot corner to stop potential run-scoring hits, and helping the Yankees gain a key win in the series.[14] New York went on to win the next three contests and clinch the world championship.[15]

In the fall of 1982, George Steinbrenner, the Yankees owner, stated that Nettles "is in the twilight of his career, and if he never plays another game for me, he has earned more than what I have paid him."[18] This comment insulted Nettles, and led to his increased dissatisfaction with the Yankees.[18] The Yankees acquired Toby Harrah in February 1984, intending to platoon him with Nettles at third base.[19] Dissatisfied with the platoon, Nettles reported to spring training at the deadline for his arrival. On March 30, 1984, the Yankees traded Nettles to the San Diego Padres for Dennis Rasmussen and a PTBNL.[20] Nettles had wanted to play closer to his San Diego home, and his approval of the trade was required given his years of service.[21][22]

Nettles famously characterized his career with the Yankees when he said that "[w]hen I was a little boy, I wanted to be a baseball player and join the circus. With the Yankees I have accomplished both."[23]

Nettles was involved in the infamous 1984 "San Diego Padres–Atlanta Braves Beanball Game", while playing for the Padres during a Braves home game on August 12, 1984. Nettles charged the mound, and attempted to tackle Braves relief pitcher Donnie Moore, after Moore intentionally beaned Nettles. Nettles missed and then was thrown to the ground by Braves first baseman (and former longtime Yankee teammate) Chris Chambliss. In 1985, after teammate Eric Show surrendered Pete Rose's record-breaking 4,192nd hit, Nettles was known for saying, "The Birch Society is going to expel Eric for making a Red famous,"[24] in reference to Show's association with the anti-Communist group, the John Birch Society.

Nettles resides in Lenoir City, Tennessee, a suburb of Knoxville. Graig and his wife Ginger have four children: Michael (deceased),[28] Barrie, Tim, and Jeff. Jeff was selected by the Yankees in the 47th round of the 1998 draft.[29]

Nettles served as a consultant for The Bronx Is Burning, a television drama that documented the 1977 Yankees.[30]

Tommy John remembered Nettles for his great sense of humor, writing: "Graig Nettles was great with the one-liners, the zingers...He was the team's pressure valve...Every clubhouse needs a guy like that, the guy with the acerbic wit who can take your mind off a bad situation."[17]

Nettles wrote a controversial book, Balls, a memoir of his baseball career written in collaboration with Peter Golenbock.[23] In the book, Nettles criticized Steinbrenner and some players as well.[18] When the book's advance promotion came to Steinbrenner's attention in March 1984, Nettles was summarily traded to his hometown San Diego Padres.[33][34]

Baseball writer Bill James noted in his 1984 Baseball Abstract that Nettles is arguably the best position player (i.e., non-pitcher) in major league history whose surname begins with the letter "N." As of 2022[update] this judgment appears to hold up: the only three players elected to the baseball Hall of Fame with "N" surnames are pitchers Hal Newhouser, Kid Nichols and Phil Niekro.

In 1991, Nettles was also inducted by the San Diego Hall of Champions into the Breitbard Hall of Fame honoring San Diego's finest athletes both on and off the playing surface.[35]

As of 2010, Nettles holds the single-season major league record for assists by a third baseman, and is tied with Brooks Robinson for second-most all-time. His 412 assists in 1971 broke the record of 405 shared by Harlond Clift in 1937 and Robinson in 1967. In 1973, his first year as a New York Yankee, he recorded 410 assists, breaking Clete Boyer's franchise record of 396 in 1962; Robinson would tie this mark in 1974. To date, Nettles and Robinson have four of the six 400-assist seasons by a third baseman in Major League history.

Nettles is mentioned in the video for Bruce Springsteen's 1985 song "Glory Days." At the end of the video, Springsteen's character, a pitcher, tells a teen that he lost an imaginary game playing against the San Diego Padres because "Nettles got me, bottom of the ninth."