The ECHL (formerly the East Coast Hockey League) is a mid-level professional ice hockey league based in Shrewsbury, New Jersey, with teams scattered across the United States and Canada. It is a tier below the American Hockey League (AHL).

The ECHL and the AHL are the only minor leagues recognized by the collective bargaining agreement between the National Hockey League (NHL) and the National Hockey League Players' Association, meaning any player signed to an entry-level NHL contract and designated for assignment must report to a club in either the ECHL or the AHL.[1] Additionally, the league's players are represented by the Professional Hockey Players' Association in negotiations with the ECHL itself. At least 662 players have played at least one game in the NHL after appearing in the ECHL.[2]

For the 2022–23 season, 28 of the 32 NHL teams have affiliations with an ECHL team[3] with only the Nashville Predators, St. Louis Blues, Vancouver Canucks, and Winnipeg Jets having no official ECHL affiliations. The offseason typically has many affiliation changes between NHL and ECHL teams. NHL teams do sometimes lend contracted players to ECHL teams with whom they have no affiliation agreements for development and increased playing time.

The league's regular season typically begins in October and ends in April, followed by the Kelly Cup playoffs. The most recent playoff champions are the Florida Everblades in 2022.

The league, which combined teams from the defunct Atlantic Coast Hockey League and All-American Hockey League, began to play as the East Coast Hockey League in 1988 with five teams— the (Winston-Salem, North) Carolina Thunderbirds (now the Wheeling Nailers); the Erie Panthers (folded in 2011 as the Victoria Salmon Kings); the Johnstown Chiefs (now the Greenville Swamp Rabbits); the Knoxville Cherokees (ceased operations as the Pee Dee Pride in 2005; folded in 2009 following failed relocation efforts); and the Virginia Lancers (now the Utah Grizzlies).

In 2003, the West Coast Hockey League ceased operations, and the ECHL board of governors approved membership applications from the Anchorage/Alaska Aces, the Bakersfield Condors, the Fresno Falcons, the Idaho Steelheads, the Las Vegas Wranglers, the Long Beach Ice Dogs and the San Diego Gulls as well as from potential teams in Ontario, California, and Reno, Nevada. Alaska, Bakersfield, Fresno, Idaho, Las Vegas, Long Beach and San Diego began play in the 2003–04 season as expansion teams. In a change reflective of the league's now-nationwide presence, the East Coast Hockey League shortened its name to the orphan initialism ECHL on May 19, 2003. The ECHL reached its largest size to date (31 teams) that season before being reduced to 28 teams for the 2004–05 season.

The ECHL has attempted to be more tech-friendly to its fans. Some improvements on the league's website have included a new schedule and statistics engine powered by League Stat, Inc. (introduced in 2006), internet radio coverage for most teams, and pay-per view broadcasting of ECHL games through B2 Networks (a subsidiary of America One Broadcasting). In 2008, the league introduced the ECHL toolbar for internet browsers which gave users short cut access to statistics, scores, transactions, and news updates.[4] ECHL action, October 2012 in Toledo, Ohio, between the Kalamazoo Wings and the Toledo Walleye

The league lost its only Canadian team with the folding of the Victoria Salmon Kings subsequent to the 2010–11 season,[6] but increased to 20 teams for the 2011–12 season with the addition of the expansion franchise Chicago Express[7] and the Colorado Eagles who previously played in the Central Hockey League.[8]

With the folding of the Chicago Express at the conclusion of the 2011–12 season and the announcement of expansion franchises in Orlando, San Francisco, Evansville, and Fort Wayne (both in Indiana and both from the Central Hockey League) the league played the 2012–13 season with 23 teams. That number dropped to 22 for the 2013–14 season with the folding of the Trenton Titans and subsequently fell to 21 with the mid-season folding of the San Francisco Bulls on January 27, 2014.

On October 7, 2014, the ECHL announced that the seven remaining active members of the Central Hockey League (the Allen Americans, Brampton Beast, Quad City Mallards, Missouri Mavericks, Rapid City Rush, Tulsa Oilers and Wichita Thunder) would be admitted as new members for the 2014–15 season. The addition of the former CHL teams plus the expansion Indy Fuel raised the number of teams to 28 and placed a team in Canada for the first time since 2011.[9]

Before the 2015–16 season, the AHL's creation of a Pacific Division led the three California ECHL teams to relocate to former AHL cities with the Bakersfield Condors, Ontario Reign, and Stockton Thunder relocating to become the Norfolk Admirals, Manchester Monarchs, and Adirondack Thunder, respectively.[10] By the 2018–19 season, the ECHL had also expanded into other markets recently vacated by the AHL in the Maine Mariners, Newfoundland Growlers, and Worcester Railers. Worcester
US-based teams in the ECHL as of the 2022–23 season. Dot colors correspond to the divisional alignment. Trois-Rivières
ECHL (Canada)
Canadian-based teams in the ECHL as of the 2022–23 season. Dot colors correspond to the divisional alignment.

At the 2012 Board of Governors Meeting, the Board elected to limit the league to 26 teams, with an emphasis on adding teams to the Western Conference.[13] However, it was decided at the 2015 Board of Governors meeting that the cap should be expanded to 30 teams, hoping to eventually match the NHL and AHL's (then) 30-team totals.[14]

Since starting with five franchises in its inaugural season, the ECHL has had dozens of franchises join and leave the league. Typically, these teams fold or relocate due to operation issues or financial losses. The Johnstown Chiefs became the last remaining founding franchise of the East Coast Hockey League to remain in its original city until it relocated to Greenville, South Carolina, following the completion of the 2009–10 season.[15]

While the ECHL has stated in recent years they would not grant voluntary suspensions of franchises for more than one year, both the Toledo Storm (now the Toledo Walleye) and Mississippi Sea Wolves (now defunct) were granted two-year suspensions—the Sea Wolves because of Hurricane Katrina and the Storm in order to demolish their present arena and construct a new one in downtown Toledo. The Mississippi Sea Wolves resumed play for the 2007–08 season, while the Toledo Walleye resumed play in their new arena for the 2009–10 season.

Seven former ECHL franchises have been directly replaced in their respective markets by American Hockey League franchises. The Greensboro Monarchs were the first, being replaced by the Carolina Monarchs in 1995. The Hampton Roads Admirals were the second, giving way to the Norfolk Admirals in 2000. The Peoria Rivermen were the third. In their case, the replacement franchise retained the Worcester IceCats history but assumed the Rivermen identity for their first AHL season of 2005–06. The Charlotte Checkers were the fourth, yielding to a franchise that retained the Albany River Rats history following the club's move to Charlotte following the 2009–10 season and assumed the Checkers identity.[16] In each of these cases, the ECHL franchise was relinquished to the league by its respective ownership group. In 2015, the three California franchises (Bakersfield Condors, Ontario Reign, and Stockton Thunder) were displaced by the formation of an AHL Pacific Division. Each ECHL franchise involved in the territorial shift was either owned or purchased by their NHL affiliate prior to being relocated.[10] 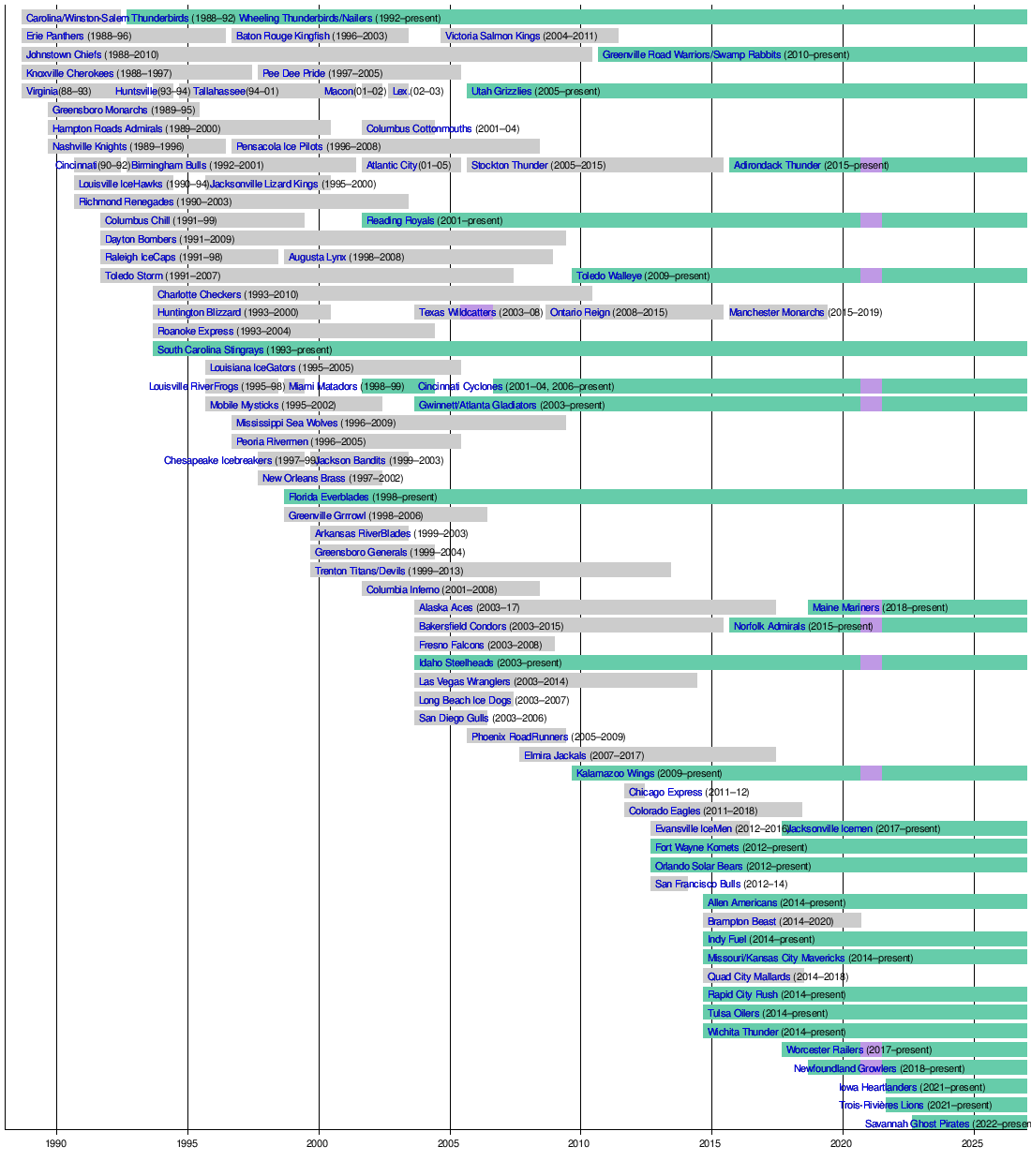 Similar to the NHL at the time, the division winners were seeded as the top three seeds in the Eastern Conference and the top two seeds in the Western Conference; the conference winner faced the eighth seed, second faces seventh, third faces sixth and fourth faces fifth in the conference quarterfinal round. The winner of the 1st/8th series played the winner of the 4th/5th series while the 2nd/7th winner played against the 3rd/6th winner in the conference semifinal series. The Board of Governors also elected to change the playoff format such that all rounds of the playoffs are now best of seven series.[18] For 2012–13, the Conference Finals and Kelly Cup Finals will use a two-referee system.[13]

Because of the late addition of the CHL teams for the 2014–15 season and its subsequent conference alignment, the top four teams in each division qualified for the playoffs and the first two playoff rounds were played within the divisions.[19]

For the realignment prior to the 2015–16 season, the playoffs changed once again to a six-division format. At the end of the regular season, the top team in each division qualified for the playoffs and be seeded either 1, 2, or 3 based on the highest point total earned in the season. Then the five non-division winning teams with the highest point totals in each conference qualified for the playoffs and be seeded 4 through 8. All four rounds will be a best-of-seven format.[20]

The alignment changed back to four divisions for the 2016–17 season, but the playoffs kept the divisional format. The top four teams in each division qualify for the playoffs and play in the division for the first two rounds. After the division finals, the winners then play the conference finals and followed by the Kelly Cup finals.

In celebration of the league's 20th year of play, the ECHL Board of Governors created the ECHL Hall of Fame in 2008, to recognize the achievements of players, coaches, and personnel who dedicated their careers to the league.