The F Virtual Window Manager is a virtual window manager for the X Window System. Originally a twm derivative, FVWM has evolved into a powerful and highly configurable environment for Unix-like systems. In 1993, during his work analyzing acoustic signatures for the United States Department of Defense, Robert Nation began hacking twm with the intent of simultaneously reducing memory usage and adding support for virtual desktops.[3]

Already known for his rxvt terminal emulator, Nation worked on reducing the memory consumption of his new window manager. Deciding to test FVWM's reception, on June 1, 1993, he bundled it with a rxvt release.

In 1994 Rob Nation stopped developing FVWM and made Charles Hines the maintainer. Rob Nation's last release of FVWM was fvwm-1.24r. The post-Rob Nation version of FVWM uses a different configuration file format and has a significantly different architecture. Many Linux distributions, as a result, distributed both fvwm-1.24r and later releases of FVWM as separate programs. As of 2009[update], fvwm-1.24r still compiles and runs on a modern Linux system without any problems. A small number of users continue to use the older FVWM release. In late 1998 the office of FVWM maintainer was abolished and further development has been conducted by a group of volunteers.

Many developers have based their own projects on FVWM in order to benefit from the years of refinement and development. Many of the popular window managers in use today are related to FVWM: Afterstep, Xfce, Enlightenment, Metisse and many more.

Originally, FVWM was the Feeble Virtual Window Manager, which was clearly stated by Robert Nation in a 1997 Linux Journal interview with him, who also claimed the name had been chosen because original releases had almost no user selectable features, so it really was feeble.[3] However, at some point the meaning of the F was lost. When Google published the old news group archives acquired from DejaNews, the original meaning was re-discovered. However, when Chuck Hine was maintaining the official FVWM Frequently Asked Questions, Chuck had never agreed with the 'feeble' explanation, and added alternate possible meanings of F to the FAQ, with many entries coming from mailing list messages.[4] This is a partial list based on the documentation distributed with FVWM.

Many of these features can be disabled at runtime or compile time, or dynamically for specific windows or loaded and unloaded as modules, or many other possibilities. These are not rigid features, FVWM does not dictate how the user's desktop should work or look like but provides the mechanisms to configure the desktop to work, look and behave the way the user wants it to. 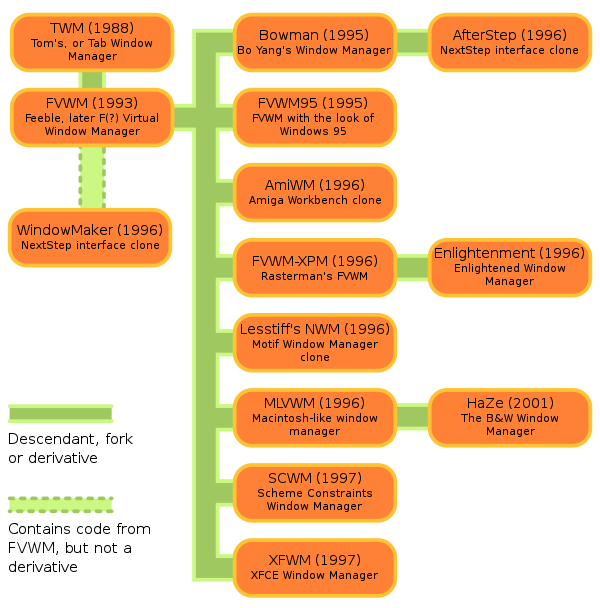 FVWM family tree, displaying some of the FVWM derivatives

Desktop environments and window managers based on X11 or Wayland
Categories
Categories: