The club was founded in 1935, as part of the Tel Aviv branch of the "Hapoel" sports cooperative, the sports department of the Histadrut labor union, which was socialist and mostly Ashkenazi.[3][4][5][6] The 15 years following the foundation of the Israeli national league in 1954 were the golden age in the club's history. During that time, it won most of its trophies.[4] However, since then the club has failed to repeat its past success and has watched as its bitter city rival, Maccabi Tel Aviv, beat them constantly in the race to trophies and European glory.

In 1980 the club inaugurated its home venue of Hapoel Arena at Ussishkin Street in the north of Tel Aviv in place of the open court that Hapoel had used for home games since 1953.[4]Fall from Glory The new arena was named after the adjacent street bearing the name of Menachem Ussishkin, a famous Histadrut leader. The uncomfortable conditions, along with the fact that Hapoel Tel Aviv's fans were considered among the most fanatic in Israeli sports, contributed to Ussishkin being known for an extremely hostile atmosphere for visiting teams.

In 1995 the Histadrut decided to suspend financial support of all its "Hapoel" sports teams, including Hapoel Tel Aviv. The club was sold to a group of private businessmen, and from 1998 until 2009 (with a short pause for the 2003–04 season), it was owned by Shaul Eizenberg, an Israeli businessman and former press officer of the Israel Football Association. Except for three years of financial support by Russian multi-millionaire Vladimir Gusinsky, the club has since consistently suffered from financial difficulties.[4] The result of this was an immediate deterioration in the club's stability, which led to relegation to the second league in 1996–97, 1998–99, and 2005–06.[4] During this period the club also conceded its most humiliating defeat of all time at the hands of local rivals Maccabi Tel Aviv by a staggering 54 points. This was part of a streak of nine defeats in one season to Maccabi Tel Aviv.

In 2006 Eizenberg decided to stop funding the team, and thus the team started the season in the second division. The situation wasn't improved in the coming season, in which the team, built almost entirely of youth players, was relegated to the third division, winning only two games all season.

For years Hapoel and Maccabi Tel Aviv were considered the top two clubs of Israeli basketball. The Local derby matches between the two teams were always considered to be the most prestigious games in Israeli sports, and ones which led to a bitter atmosphere between fans of both clubs, often resulting in acts of mutual violence and hooliganism.

The tension between both clubs reached its peak in the 1980s. During this era they met for several times in the league's play-off finals and state cup finals. Probably the most famous meeting came in the best-of-three League Championship Finals in April 1985. Hapoel Tel Aviv won the first game in convincing fashion, leading by as much as 25 points late in the second half. Mike Largey always played well against Maccabi Tel Aviv, having beaten them five times in the four years that he played for Hapoel Tel Aviv. Prior to his arrival, Hapoel Tel Aviv had not beaten Maccabi Tel Aviv in 17 straight games. The Hapoel Tel Aviv fans were very confident that this was their year to win the League Championship. The second game started with Largey picking up where he left off from the first game. Then, towards the beginning of the second half, after play had stopped for a loose ball foul, Maccabi Tel Aviv's Motti Aroesti shoved his hand into the face of Largey. Largey responded immediately and threw Aroesti to the ground. Afterward, both players were ejected from the game and were automatically suspended from playing in Game 3. Largey was far more valuable to Hapoel Tel Aviv then Aroesti was to Maccabi Tel Aviv and, not surprisingly, Maccabi Tel Aviv went on to win Games 2 and 3. To this day, most Hapoel Tel Aviv fans are convinced that Maccabi Tel Aviv planned this provocation as a way to deal with its nemesis. These matches are still regarded as of the most exciting in Israeli basketball history.

During the years as Maccabi Tel Aviv strengthened its dominance in Israeli basketball and its status as the almost-eternal champions, "Hapoel" fans accused their rival's management of various wrongful doing, including offering bribes to referees, signing contracts with rival players during the regular season and playoff series, and receiving exaggerated funds from state television for broadcasting rights. These accusations have never been proven true. With the decline of "Hapoel" in recent years the matches between both clubs became somewhat one-sided.

In a controversial decision, Hapoel Tel Aviv decided to hold its home matches at Yad Eliyahu Arena. With its 10,383-seat capacity it had been recognized for years to be the home of rivals Maccabi Tel Aviv. The decision followed a statement by the club's owner Shaul Eizenberg which stated "Hapoel" must move to a larger arena in order to repeat its past glory days. Also contributing to this decision was a change in policy of local police and municipal authorities. They declared the Ussishkin Arena to be unsafe and declared plans for demolishing it and building a boardwalk in place of the arena. The arena was demolished in 2007, despite a campaign by fans to preserve it.[7] The move was opposed by the club's fans.[5] The owner in return announced the club's fans to be "Hooligans who oppose progress" and announced the club would try to seek new fans.[citation needed]

Although the team managed to stay in the Israeli first league, it played the 2006–07 season in the second league due to lack of funds. The lack of funds and managerial disorders, as well as a completely new team based on youth players, led to dismay and the team finished last in the second league and was relegated to the third division at the end of that season.[citation needed] 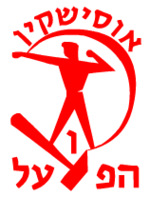 Hapoel Ussishkin, the new fan-owned and run team, was founded in July 2007 and registered in the Israeli Liga Bet Dan District (fifth tier),[8] by supporters of Hapoel Tel Aviv B.C. following the club's relegation to the Israeli third tier, after years characterized by lack of financial support by the club's owner Shaul Eizenberg and poor management, which led it to bankruptcy, and finally relegation to the fourth tier, and the demolition of the Ussishkin Arena.[5] In December 2009 the original men's senior team announced its disbandment[9] followed by the fans team's trust buying the rights to Hapoel Tel Aviv B.C. brand through a third party. The name change was approved by the supporter trust in the following months,[10] with the team promotion for the 2010–11 national league season.

Backed with an astronomical[citation needed] budget in fifth-tier terms of over 300,000 NIS, the team finished its first season with a perfect record of 22–0 and qualified to the 4th division. The club also won another title by taking the Israeli 5th Division Union Cup, also without losing a single game.

This season was also finished with a perfect record, 22–0, and the team qualified to the 3rd division. On April 30, 2009, the team won the Israeli 4th and 3rd Division Union Cup, winning over Hapoel Kfar Saba in the final game.

Before the 2009–2010 season started, it was decided that Hapoel Ussishkin would not play in the same district as Hapoel Tel Aviv, which played in the 3rd division as well, thus avoiding an intriguing match-up. The team qualified to Liga Leumit with a perfect record and won the Israeli 4th and 3rd Division Union Cup, winning over Elitzur Kohav-Yair/Keffar-Sabba in the final game. In June 2007 the new team was founded and registered in the Israeli 5th tier (Dan District). The club is owned and run by a supporters' trust with 1,800 registered paying members as of May 2011.[11][3] The admission fee to the trust was 300 NIS as of May 2011. Besides voting rights in the trust's general assemblies, it also provides discount prices for club services such as a season ticket.

The club holds elections for the club's board every two years. In the second election in history on June 11, 549 voters decided to keep four of the current board members in place for another term, while electing as a fifth member Gilad Simchoni, the team's captain in recent years.

At the end of 2009/10 season, Following the closing of the original Hapoel Tel Aviv club, the rights to the club name were purchased by an anonymous businessman, and were given to the Hapoel Ussishkin Management. The Management of Hapoel Ussishkin, following a member-wide voting process, decided to rename the club name back to its original name, Hapoel Tel Aviv. In the 2010/11 season, the club reached the semi-finals of the state cup, before being knocked off by Elitzur Netanya. The Club failed to achieve promotion to the first division at the end of the 2010–11 season following a loss in the playoffs finals to B.C. Ha-Bika'a.

In the 2011–12 season the club finally achieved promotion to the First Division, following a playoff win over Maccabi Beér Yaacov, therefore returning to the top tier after six years, and being the first fan-owned club in Israel to participate in a top-tier league.

In 2014–17, Tamir Blatt played for the team. In March 2016, NBA star Nate Robinson signed with Hapoel for the remainder of the season.[12] Robinson led Hapoel to the 8 seed and qualification for the Playoffs. On May 19, Robinson scored 46 points in a quarter-final game against Hapoel Jerusalem. It was the most points scored in a Playoff game since 1985.[13]

In its first season. the ticket price was set at 15 NIS. Since the majority of fans ceased to attend the old team's games, the average attendance in Hapoel Usishkin games was about 650, with a season-high of 1,200 (full house) in the last game of the season against Hapoel Gan-Shmuel. In its second season, despite a rise in ticket prices, average attendance rose to 1,000.

Players of the Year The HUTA Player of the Year award is voted for by fans in time for the final home game of the season. Previous winners have been: