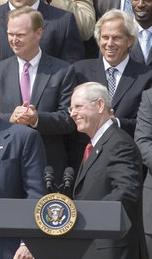 Mara (left) at the Giants' visit to the White House after their Super Bowl XLII victory.

Mara joined the Giants in 1991, serving as General Counsel and later as Executive Vice President and Chief Operating Officer until his father's death in 2005, when he assumed the team's presidency.[2]

Despite winning two Super Bowls during his tenure as owner, Mara was criticized in the late 2010s and early 2020s for being too loyal to longtime Giants employees.[6] He was criticized for keeping general manager Dave Gettleman after the 2020 season.[7]

In September 2021, he was booed by fans while speaking at Eli Manning's number retirement and Ring of Honor ceremony,[8] and didn't address the crowd that November when the team retired Michael Strahan's number.[9]

Mara has served for 15 years on the NFL Competition Committee, which suggests rule and policy changes to all NFL teams. He is the current chairman of the NFL Management Council Executive Committee.[2][10] Mara, alongside Steve Tisch and Woody Johnson, brought Super Bowl XLVIII to MetLife Stadium in February 2014.[2]

Mara is the third generation of his family to own the Giants. His grandfather, Tim, founded the team in 1925. Tim's sons, Wellington and Jack (John's uncle), inherited the team in 1959, when Tim died. Among NFL franchises, only the Chicago Bears (controlled by the Halas-McCaskey family since 1921) have been in the hands of one family longer than the Giants.[11]

Mara serves on the Board of Directors of Saint Vincent's Hospital in Harrison, New York and Boys Hope Girls Hope of New York.[2]