The Chiefs have had 55 different quarterbacks attempt a pass, 38 different starting quarterbacks, and 19 different quarterbacks start least 10 games. Eleven of the Chiefs starting quarterbacks have led the Chiefs to the playoffs, however, only five have won a playoff game.[1] Patrick Mahomes has been the Chiefs' starting quarterback since 2018. Mahomes has been the full-time starting quarterback since the beginning of the 2018 season, when he broke multiple single season team records and became the first Chiefs player to win MVP. Cotton Davidson was the team's first starting quarterback. He played all 14 games for the Texans in their inaugural 1960 season.[2] Davidson played with the franchise from 1960 to 1962,[3] and was traded in 1963 to the Oakland Raiders.[4] Len Dawson signed with the Chiefs (then known as the Texans) on July 2, 1962 and played for the franchise for 14 seasons.[4][5] With Dawson as the team's starter, the Texans/Chiefs won three American Football League championships and appeared in two Super Bowl championship games.[5] Dawson was named Most Valuable Player after the Chiefs' victory in Super Bowl IV and retired in 1975 with several franchise records.[5][6] Three quarterbacks currently in the Pro Football Hall of Fame have started at least one game for Kansas City: Dawson, Joe Montana, and Warren Moon. The most quarterbacks started in one season was five in 1987, however, this was primarily due to the player strike that led to teams using replacement players. The Chiefs have had the same quarterback start every game in a season 15 times. Trent Green started the most consecutive games with 81. Mahomes and Dawson are the only quarterbacks to lead the Chiefs to the Super Bowl, I and IV for Dawson and LIV and LV for Mahomes, with the Chiefs winning IV and LIV. Patrick Mahomes, the current starter since 2018 Matt Cassel's 15 starts in 2009 were the most for one Chiefs starting quarterback since Trent Green's complete season in 2005. 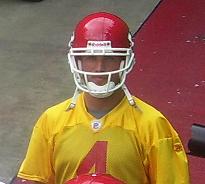 Tyler Thigpen was the third different starting quarterback for the Chiefs in the 2008 season.[7] Cotton Davidson, the first starting quarterback in franchise history. Starter in 1960 and 1961

The number of games started in the season by each player is listed in small parentheses. Statistics do not include postseason starts.

Most games as starting quarterback

Only the top 10 are listed below.

Below are the top five quarterbacks in each category throughout their tenure with the Chiefs. Stats are complete through week 18 of the 2021 NFL Season.

a : Strikes by the National Football League Players Association in the 1982 and 1987 seasons resulted in shortened seasons (9 and 15-game schedules, respectively).[103]
b : Replacement quarterbacks Matt Stevens, Frank Seurer, and Doug Hudson started for the Chiefs alongside Kenney and Blackledge following the NFL Players Association strike in 1987. For the only time in team history, five different quarterbacks started in 1987 following the player's strike.[30][47][104]