A modal frame in music[1] is "a number of types permeating and unifying African, European, and American song" and melody.[2] It may also be called a melodic mode. "Mode" and "frame" are used interchangeably in this context without reference to scalar or rhythmic modes. Melodic modes define and generate melodies that are not determined by harmony, but purely by melody. A note frame, is a melodic mode that is atonic (without a tonic), or has an unstable tonic.

Modal frames may be defined by their:

Shout-and-fall or tumbling strain is a modal frame, "very common in Afro-American-derived styles" and featured in songs such as "Shake, Rattle and Roll" and "My Generation".[6]

"Gesturally, it suggests 'affective outpouring', 'self-offering of the body', 'emptying and relaxation'." The frame may be thought of as a deep structure common to the varied surface structures of songs in which it occurs.[6]

Triadic chords may be considered as part of a ladder of thirds.

It is a modal frame found in Blues and British folk music. Though a pentatonic scale is often analyzed as a portion of the circle of fifths, the blues scale and melodies in that scale come, "into being through piling up thirds below and/or above a tonic or central note."[8][9][10]

They are "commonplace in post-rock 'n' roll popular music – and also appear in earlier tunes".[8] Examples include The Beatles' "A Hard Day's Night", Buddy Holly's "Peggy Sue" and The Who's "My Generation", Ben Harney's "You've Been A Good Old Wagon" (1895) and Ben Bernie et al.'s "Sweet Georgia Brown" (1925).

The modal frame of The Beatles' "A Hard Day's Night" features a ladder of thirds axially centered on G with a ceiling note of B♭ and floor note of E[♭] (the low C being a passing tone):[2] 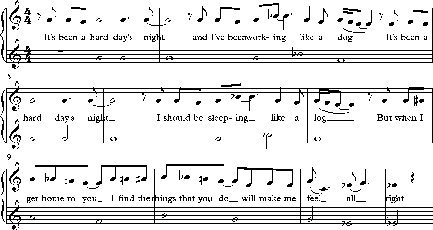 According to Middleton, the song, "at first glance major-key-with-modal-touches", reveals through its "Line of Latent Mode" "a deep kinship with typical blues melodic structures: it is centred on three of the notes of the minor-pentatonic mode [on C: C, E-flat, F, G, B-flat] (E♭-G-B♭), with the contradictory major seventh (B♮) set against that. Moreover, the shape assumed by these notes – the modal frame – as well as the abstract scale they represent, is revealed, too; and this – an initial, repeated circling round the dominant (G), with an excursion to its minor third (B♭), 'answered' by a fall to the 'symmetrical' minor third of the tonic (E♭) – is a common pattern in blues."[11]