Sorrel was born in Savannah, Georgia, the son of one of the wealthiest men in the city, Francis Sorrel. He was the brother-in-law of William W. Mackall, who was a Confederate general and chief of staff to Braxton Bragg.[3] 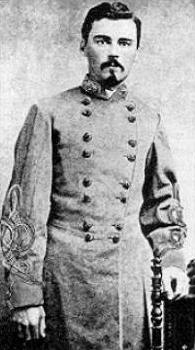 In 1861, Moxley left his job as a Savannah bank clerk, taking part in the Confederate capture of Fort Pulaski as a private in the Georgia Hussars. With letters of introduction from Colonel Jordan, from Gen. P.G.T. Beauregard's staff, and a friend of his father's, he reported to Brig. Gen. James Longstreet at Manassas, Virginia, on July 21, 1861, and began serving as a volunteer aide-de-camp. Longstreet wrote that his young aide "came into the battle as gaily as a beau, and seemed to receive orders which threw him into more exposed positions with particular delight."[4]

On September 11, 1861, Sorrel received his commission as captain and was assigned as General Longstreet's adjutant-general. He was promoted to major on June 24, 1862 and to lieutenant colonel on June 18, 1863. He served under Longstreet until October 1864, when he was appointed brigadier general. Sorrel then commanded Sorrel's Brigade of Maj. Gen. William Mahone's division at Petersburg and Hatcher's Run, and was wounded in both battles.

Richard L. DiNardo wrote: "Even Longstreet's most virulent critics have conceded that he put together the best staff employed by any commander, and that his de facto chief of staff, Lieutenant Colonel Moxley Sorrel, was the best staff officer in the Confederacy."[5]

After the Civil War, Sorrel returned to Savannah, worked as an executive for the Ocean Steamship Company, and served on the board of the Georgia Historical Society.

When Robert E. Lee visited Savannah months before his death in 1870, Sorrel led the Savannah delegation, greeted General Lee at the train station, and escorted him around the city.

Sorrel died in Roanoke, Virginia and is buried in Laurel Grove Cemetery, Savannah.

Sorrel's memoir, Recollections of a Confederate Staff Officer, was published posthumously, in 1905.[6] Historian Douglas Southall Freeman deemed Sorrel's book one of the best accounts of the personalities of the major players in the Confederacy, characterized by "a hundred touches of humor and revealing strokes of swift characterization."[7]

The Sorrel-Weed House in Savannah, where he grew up, is one of the finest examples of Greek Revival architecture in the United States. Designed in 1836 by Charles Clusky, it was one of the first two houses in Georgia to be designated a state landmark. The house is open to the public for tours.