Russell Alexander Alger (February 27, 1836 – January 24, 1907) was an American politician and businessman. He served as the 20th Governor of Michigan, U.S. Senator, and U.S. Secretary of War. 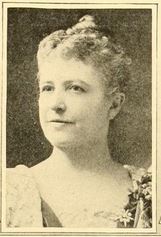 His parents died in 1848, leaving Russell the oldest of three orphan children, without money and with a brother and sister to care for and support.[2] He had been accustomed to working for the neighbors for a small quantity of provisions or a few pennies a day even before the death of his parents, who were very poor.[2]

He now found homes for his brother and sister and secured work for himself on a farm, his remuneration being his board, clothes and the privilege of attending school three months out of the year.[2] He attended Richfield Academy in Summit County, Ohio, and taught country school for two winters.[3]

He studied law in Akron, Ohio, and was admitted to the bar in March 1859. He first began to practice law in Cleveland.[2] In 1860, he moved to Grand Rapids, Michigan and engaged in the lumber business.

Alger enlisted as a private soldier in the American Civil War on September 2, 1861.[4] He was commissioned and served as a captain and major in the 2nd Michigan Cavalry Regiment.[4] In three years, he served in 66 different battles and skirmishes.

On July 1, 1862, at the Battle of Booneville, Alger to attack the enemy's rear with ninety men. Alger was wounded and taken prisoner, but he escaped the same day. The Confederate forces were soundly defeated.

On October 16, he was made lieutenant colonel of the 6th Michigan Cavalry.

On February 28, 1863, he was promoted to colonel of the 5th Michigan Cavalry. His command was the first to enter Gettysburg on June 28. Alger was personally mentioned in the report of General George Armstrong Custer on cavalry operations there.

On July 8, 1864, Alger was severely wounded pursuing the enemy at Boonesborough, Maryland.

Alger participated in General Sheridan's Valley Campaigns of 1864 in Virginia. On June 11, 1864, at Trevillian Station, he captured a large force of Confederates with a brilliant cavalry charge.

After the Civil War, Alger settled in Detroit as head of Alger, Smith & Company and the Manistique Lumbering Company. His holdings included a great pine forest on Lake Huron covering over 100 square miles (260 km2) and producing more than 75,000,000 board feet (180,000 m3) of lumber per annum.[8]

In order to transport the lumber, Alger led his company to create the Detroit, Bay City and Alpena Railroad,[9] of which Alger served as president.[10]

After clear cutting forests in the lower peninsula, his lumber companies acquired land in the Upper Peninsula of Michigan including Kingston Plains, just south of the Pictured Rocks National Lakeshore. These bleak stump plains have resisted 90 years of reforestation efforts.[11] Alger made a fortune logging the area which he used to propel himself to governor of Michigan.[12]

At the turn of the 20th century, he and Florida landowner Martin Sullivan established the Alger-Sullivan Lumber Company, which milled lumber in Foshee, Alabama and Century, Florida.[13]

Alger was active in politics as a Republican.[14] In 1866, he was a delegate to the party's Wayne County convention and its state convention.[14] In the late 1860s, Alger was a leader of the Boys in Blue, an organization of Union veterans formed to support Republican Party policies and candidates.[15] In October 1872, Alger was a vice president of the committee that organized a Republican campaign event which featured a speech by James G. Blaine, then serving as Speaker of the United States House of Representatives.[16]

In early June 1880, Alger was a delegate to a mass interstate meeting of Union veterans which met in Chicago to devise a plan for supporting Republican candidates in that year's elections.[20] In mid-June, he presided over the Republican meeting in Detroit which was organized to ratify the results of the 1880 Republican National Convention, which had been held earlier in the month.[21] In 1884, Alger was elected Governor of Michigan and served from January 1, 1885, to January 1, 1887.[22] Highlights of his term included creation of the state board of pardons, the founding of a veterans home in Grand Rapids, the creation of two new counties (Alger and Iron), and establishment of the Michigan College of Mines.[22] Alger declined renomination in 1886.[22]

Alger's name was placed in nomination for president at the 1888 Republican National Convention. He rose in balloting to 142 votes, with 416 necessary to win, but Benjamin Harrison ultimately obtained the nomination and went on to win the general election. After the election, Alger served as a presidential elector for Harrison.[22]

On March 5, 1897, Alger was appointed Secretary of War in the Cabinet of U.S. President William McKinley.

As Secretary, Alger recommended pay increases for military personnel serving at foreign embassies and legations, legislation to authorize a Second Assistant Secretary of War, and a constabulary force for Cuba, Puerto Rico, and the Philippines.

He was criticized for the inadequate preparation and inefficient operation of the department during the Spanish–American War, especially for his appointment of William R. Shafter as leader of the Cuban expedition.[23] "Algerism" became an epithet to describe the claimed incompetence of the army, especially as compared to the more stellar performance of the navy.[24]

Alger resigned at President McKinley's request, August 1, 1899. He published a personal history of the war, titled The Spanish–American War, in 1901.[25]

John Singleton Mosby accused Alger of pursuing a vendetta against him during Alger's tenure as War Secretary.[26] Mosby had been a Confederate partisan during the Civil War.[26] Afterwards, he became a Republican and supported the presidential candidacies of Ulysses S. Grant and Rutherford B. Hayes.[27] In 1878, Hayes appointed Mosby as U.S. Consul in Hong Kong, where Mosby served until 1885.[27]

Mosby supported William McKinley for president in 1896, and was assured by members of Congress close to McKinley that he could expect appointment to a consulship in Asia or South America.[27] When no appointment was forthcoming, Mosby concluded that Alger was blocking his return to the consular service and claimed that Alger was pursuing a vendetta.[27] According to Mosby, because during the war Mosby had ordered the execution of soldiers under Alger's command who were accused of looting and destroying the property of supporters of the Confederacy in 1864.[26] Historians and authors have concluded that it is more probable that the official preventing Mosby from receiving an appointment under McKinley was Secretary of State John Sherman.[27] When Mosby began serving in Hong Kong, he concluded that his predecessor, David H. Bailey, had been involved in embezzlement and fraud.[27] Bailey was forced to resign as U.S. Consul in Shanghai.[27] Bailey was from Sherman's home state of Ohio, and Sherman had authority over diplomatic appointments, so Sherman is more likely than Alger to have taken revenge on Mosby.[27]

On September 27, 1902, Alger was appointed by Michigan Governor Aaron T. Bliss to the United States Senate to fill the vacancy caused by the death of James McMillan. He was elected to the seat by the Michigan State Legislature in January 1903.

Alger was chairman of the Senate Committee on Pacific Railroads during the 59th Congress.[28]

Alger was the founder of a prominent family, many of whom became involved in 20th century Michigan politics and active in the Republican Party.[29]

The Algers had a home in Black River, Alcona Township, Michigan, from which Alger oversaw his lumbering operations.

Frederick graduated from Harvard in 1899, served as a lieutenant colonel with the American Expeditionary Force in France during the First World War, and was awarded the French Legion of Honor.

Russell Jr. was instrumental in persuading the Packard Motor Car Company to move to Michigan from Ohio. He built a palatial Italian Renaissance style estate, "The Moorings," in Grosse Pointe. It was donated in 1949 and became the Grosse Pointe War Memorial.[30]

He died in Washington, D.C., in 1907. He is interred in Elmwood Cemetery in Detroit, Michigan.

In a memorial address, Senator John Spooner of Wisconsin said of Alger, "No man without noble purpose, well-justified ambitions, strong fiber, and splendid qualities in abundance could have carved out and left behind him such a career."[31]

In May 1898, the War Department established Camp Russell A. Alger on a farm near Falls Church and Dunn Loring, Virginia. Faced with a typhoid fever epidemic, it was abandoned the month at the war's end in August 1898 and sold the following month. In its brief existence, 23,000 men trained there for service. It is commemorated by an official Virginia historical marker.[34]

In 1909, a monument to Alger was erected on the William G. Mather Building in Munising, Michigan. It consists of a bronze bust of Alger on a stone pedestal, and was sculpted by Detroit sculptor Carlo Romanelli with funds provided by the heirs of Alger and by the Board of Education of the Munising Township Schools.

In 1921, a memorial fountain was dedicated to Alger in Grand Circus Park, Detroit by sculptor Daniel Chester French and architect Henry Bacon.[37]