A nautical mile is a unit of length used in air, marine, and space navigation, and for the definition of territorial waters.[2][3] Historically, it was defined as the meridian arc length corresponding to one minute (1/60 of a degree) of latitude. Today the international nautical mile is defined as exactly 1,852 metres (6,076 ft; 1.151 mi). The derived unit of speed is the knot, one nautical mile per hour. 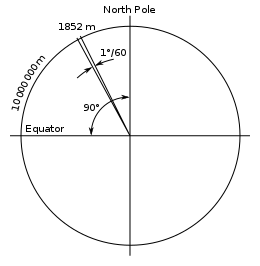 There is no single internationally agreed symbol, with several symbols in use.[1] Visual comparison of a kilometre, statute mile and nautical mile

The word mile is from the Latin word for a thousand paces: mille passus. Navigation at sea was done by eye[10] until around 1500 when navigational instruments were developed and cartographers began using a coordinate system with parallels of latitude and meridians of longitude.

Since the Earth is not a perfect sphere but is an oblate spheroid with slightly flattened poles, a minute of latitude is not constant, but about 1,861 metres at the poles and 1,843 metres at the Equator.[12] France and other metric countries state that in principle a nautical mile is an arcminute of a meridian at a latitude of 45°, but that is a modern justification for a more mundane calculation that was developed a century earlier. By the mid-19th century, France had defined a nautical mile via the original 1791 definition of the metre, one ten-millionth of a quarter meridian.[13][14] Thus 10,000,000 m/90 × 60 = 1,851.85 m ≈ 1,852 m became the metric length for a nautical mile. France made it legal for the French Navy in 1906, and many metric countries voted to sanction it for international use at the 1929 International Hydrographic Conference.

The metre was originally defined as 1⁄10,000,000 of the length of the meridian arc from the North pole to the equator,[b] thus one kilometre of distance corresponds to one centigrad (also known as centesimal arc minute) of latitude. The Earth's circumference is therefore approximately 40,000 km. The equatorial circumference is slightly longer than the polar circumference – the measurement based on this (40,075.017 km/360 × 60 = 1,855.3 metres) is known as the geographical mile.

Using the definition 1/60 of a degree of latitude on Mars, a Martian nautical mile equals to 983 m (1,075 yd). This is potentially useful for celestial navigation on a human mission to the planet, both as a shorthand and a quick way to roughly determine the location.[21]