The Northwoods League is a collegiate summer baseball wooden bat league. All players in the league must have NCAA eligibility remaining in order to participate. The league is amateur, and players are not paid, so as to maintain their college eligibility. Graduated senior pitchers are also eligible to play in the Northwoods League. Each team may have four of these players at a time.

In 2020, some teams cancelled their season due to the COVID-19 pandemic. For those teams that did play, instead of playing within their usual divisions, they played in hub regions, with some creating "temporary teams".

Established in 1994, the Northwoods League was the first for-profit summer collegiate baseball league. It has more teams and plays more games than any other summer collegiate baseball league.[1] The Northwoods League drew over 1.1 Million fans for the fourth consecutive year in 2017. The purpose of the league is to develop players while college baseball teams are not allowed to work out. Many of the teams in the league play in ballparks formerly occupied by professional clubs from the Midwest League, Prairie League, Northern League, and Frontier League. The wooden bat circuit allows communities deemed too small for professional ball to continue to enjoy high-quality, competitive baseball during the summer months. The Northwoods League was the first summer collegiate baseball league to broadcast on the ESPN network, and currently webcasts all of its games.

The teams are located in the Northwoods region of the Upper Midwestern United States and Northwestern Ontario, mostly in the U.S. states of Minnesota (five teams) and Wisconsin (nine teams); also with three teams in Michigan and one team each in Iowa, Illinois, North Dakota, Indiana and Ontario.

Over 200 league alumni have gone on to play in Major League Baseball (MLB) with 91 alumni entering the MLB ranks from 2013 to 2017. Alumni Max Scherzer, the 2017 National League Cy Young Award winner, and American League runner-up Chris Sale faced each other as the starting pitchers in the 2017 and 2018 Major League Baseball All-Star Games.

In small cities it may be hard to find the financial stability in a newly founded baseball league. The Northwoods League (NWL) realized it needed to gain significant revenue from sponsors in order to succeed. According to league Chairman and co-founder Dick Radatz, Jr, two-thirds of the revenue comes from sponsors and the remainder from ticket sales, concessions, and team merchandise. Radatz also noted the importance of having the sponsor revenue before the beginning of the season.[2] 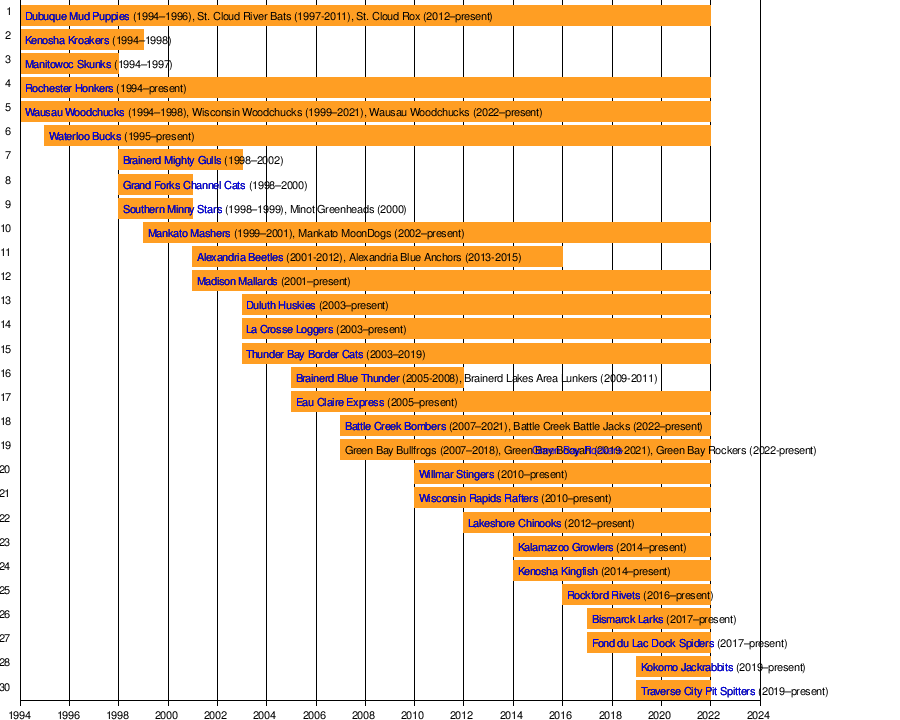 Not included are the temporary teams that were created and made for 2020 as teams had to cancel their season or only play locally/regionally.

The Northwoods League, in addition to being a developmental league for players and coaches, is also a developmental league for umpires. The concentrated game schedule, travel, and Minor League-like game conditions give NWL umpires a pre-professional experience. Since the League's inaugural season in 1994, 44 of its former umpires have furthered their careers in affiliated professional baseball.

The League recruits its umpires from the two umpire schools whose curricula have been approved by the Professional Baseball Umpire Corps. (PBUC): The Minor League Umpire training Academy and Harry Wendelstedt School for Umpires. The umpires ultimately chosen are usually among the top school graduates who were then selected to the pre-season, PBUC sponsored Umpire Evaluation Course.

The NWL contracts with eleven three-man crews during the regular season, a six-man crew during the mid-season All-Star game, and six umpires for both the divisional playoffs and championship series.