The Frontier League is a professional independent baseball league with teams in the Northeastern and Midwestern United States and Eastern Canada. Formed in 1993, it is the oldest currently running independent league in the United States. The league is headquartered in Sauget, Illinois. In 2020, the Frontier League, together with the American Association and the Atlantic League, became an official MLB Partner League.[1]

The league has a partnership agreement with the California Winter League for player development.[2]

Teams in the Frontier League must recruit and sign their own players, who usually are undrafted college players or one-time prospects who have been released by their teams.

Frontier League rules limit teams to three "veterans" (Players older than 29 years as of October 1), while a minimum of ten of the 24-man roster are required to be rookies.[3]

Typically, teams play a 96-game regular season from May to September.

Due to the low pay, players typically live with host families and receive meal money during the season.

On June 20, 2000, Brian Tollberg debuted with the San Diego Padres, becoming the first player from the Frontier League to make it to the Majors. A week later, Morgan Burkhart made his debut with the Boston Red Sox.

Although the league does not have any teams located in the same city as Major League teams, it does nonetheless have teams located within the markets of Major League teams. The Chicago area has three teams (Joliet Slammers, Schaumburg Boomers and Windy City ThunderBolts), as does the New York area (New Jersey Jackals, Sussex County Miners, and New York Boulders), and St. Louis (Gateway Grizzlies), Cleveland (Lake Erie Crushers), Cincinnati (Florence Y'alls) and Pittsburgh (Washington Wild Things) each have one. The Wild Things, in particular, have been able to market themselves as a successful alternative to the Pittsburgh Pirates due to the latter franchise's long stretch of losing seasons, which lasted from the Frontier League's founding in 1993 until 2013 when the Pirates finished with a record of 94–68.[6]

On October 16, 2019, it was announced that the Frontier League would be merging with the Canadian American Association of Professional Baseball, absorbing five of its teams to form the largest independent professional baseball league. This added the New Jersey Jackals, New York Boulders, Quebec Capitales, Sussex County Miners, and Trois-Rivieres Aigles to the league; the Ottawa Champions, the last remaining Can-Am League team, was not invited to participate.[7] The divisions were renamed, with the easternmost teams playing in the Can-Am Division and the westernmost in the Midwestern Division.

On September 24, 2020, Major League Baseball announced that it named the Frontier League an MLB Partner League.[8] This enables collaboration with MLB to jointly discuss marketing and promotional initiatives to grow, expand, and enhance the game of baseball.

For the 2021 season, the Frontier League announced it would be adding two new teams. The first announcement came around the same time as the announcement of the partnership with Major League Baseball, as Ottawa was granted an expansion franchise in the league. The team, as chosen by fans in a contest, was named the Titans and will play at RCGT Park.[9][10] Then, on January 8, 2021, after the reorganization of Minor League Baseball, the league added the Tri-City ValleyCats, which were one of several teams that were orphaned or disbanded when the New York-Penn League was folded. The Titans and ValleyCats joined the five former Can-Am League teams and Washington in the Can-Am Division; to even the divisions at seven teams, Lake Erie was moved to the Midwestern Division.[citation needed]

In April 2021, the league announced that the Québec Capitales, the Trois-Rivières Aigles, and the Ottawa Titans would not compete in the 2021 season due to the prolonged closure of the Canada–United States border as a result of the ongoing COVID-19 pandemic. The Titans, the Aigles and the Capitales later joined forces to form a new team that competed as a member of the Atlantic Division.[11] Known as Équipe Québec, they began the season as a traveling team, and starting on July 30, 2021, started sharing home games between Québec City and Trois-Rivières following a loosening in border restrictions.[12][13] 10 games were played in Québec City and 11 in Trois-Rivières. They did not play in Ottawa due to COVID-19 restrictions in Ontario.

On October 6, 2021, the owners of the Southern Illinois Miners, Jayne and John Simmons, announced they would be retiring from professional baseball to spend more time with family and the Miners would be ceasing operations and dropping out of the Frontier League.[14][15] As a result, the league formed the Empire State Greys, to compete as a traveling team with a roster of players from the Empire Professional Baseball League.[16]

On February 24, 2022, the Frontier League announced that all games for the 2022 season would be available through the streaming platform FloSports.[17] 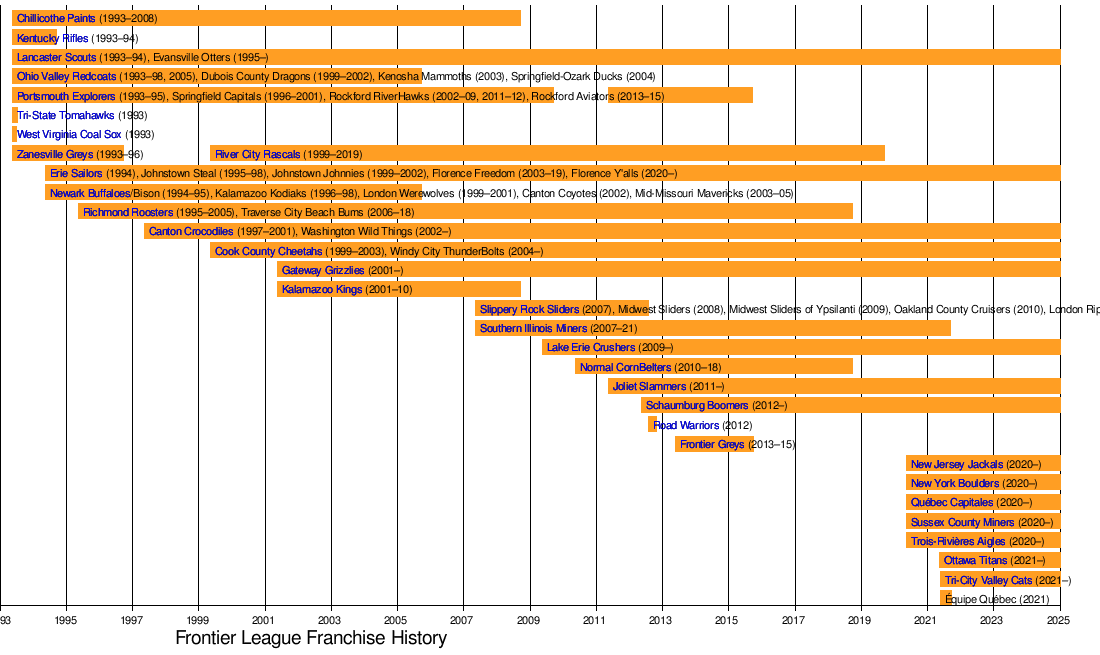