The American Association was founded in October 2005 when the St. Paul Saints, Lincoln Saltdogs, Sioux City Explorers, and Sioux Falls Canaries announced they were leaving the Northern League. Around the same time, the Central Baseball League announced it was disbanding after four seasons. The Fort Worth Cats, Shreveport-Bossier Sports, Pensacola Pelicans, Coastal Bend Aviators, and El Paso Diablos joined the four former Northern League teams and the expansion St. Joe Blacksnakes to form the American Association as a ten-team league. The new league began play in 2006, with a 96-game schedule, which has since expanded to 100 games.

2008 saw the league lose the Blacksnakes and Aviators, with the Grand Prairie AirHogs and Wichita Wingnuts joining in their place. In 2011 and 2012 the league went through a significant shift. Fort Worth was kicked out of the AA and moved to the North American League, while Shreveport and Pensacola both relocated. The Pelicans moved to Amarillo, Texas and became the Amarillo Sox (later the Amarillo Thunderheads) while Shreveport, who had changed their name to the Shreveport-Bossier Captains, moved to Laredo, Texas and became the Laredo Lemurs. In addition, four more Northern League franchises (Fargo-Moorhead RedHawks, Gary SouthShore RailCats, Kansas City T-Bones, and Winnipeg Goldeyes) joined the American Association as that league's stability came into question.

For the 2012 season, the American Association began interleague play with the Can-Am League.[3] The two leagues were both headquartered in Durham, North Carolina, and both had Miles Wolff as their commissioner. This was similar to interleague play in Major League Baseball, but American Association and Can-Am League were separate legal entities and had separate playoffs/championships.

At the end of the 2013 season, due to the Tucson Padres relocating to their city, the El Paso Diablos suspended operations. The team was eventually revived and relocated, operating as the Joplin Blasters. The Blasters ceased operations after the conclusion of the 2016 season.

On November 19, 2015, Miles Wolff announced that there would no longer be interleague play. It also was announced that for the Amarillo Thunderheads and Grand Prairie AirHogs would operate as a joint team, the Texas AirHogs, playing 25 games in Amarillo and 25 games in Grand Prairie to make up a 12-team league.[4][5] The team remained in Grand Prairie full-time in 2017, with the Cleburne Railroaders joining the league the same season. Shortly before the 2017 season, the Laredo Lemurs withdrew from the league.[6] They were temporarily replaced by the Salina Stockade from the Pecos League for the season. The Chicago Dogs joined for 2018 [7] and the Milwaukee Milkmen joined in 2019, replacing the Wichita Wingnuts, who folded.

The 2021 season saw the league lose both the Texas AirHogs, who dropped out of the league,[9] and the St. Paul Saints who move to affiliated ball as the Triple-A affiliate of the Minnesota Twins.[10] Joining the league in 2021 is the Kane County Cougars, who were dropped from affiliated ball during the 2021 minor league reorganization,[11] as well as the Houston Apollos who will be a traveling team for the 2021 campaign.[12]

In May 2021, the league announced the approval of Lake Country Baseball, based in Oconomowoc, Wisconsin, as a new member of the league starting in 2022. Construction commenced later that summer on a new stadium and multi-use indoor sports facility, which opened for play on May 20, 2022 as Wisconsin Brewing Company Park.[13] The team selected the name Lake Country DockHounds, after hosting an online name the team contest.[14]

With the DockHounds joining the league for the 2022 season, the American Association opted for realignment of the divisions. Going away from the prior North/South divisions, the league decided to go with East/West divisions. Grouping Cleburne, Chicago, Kane County, Gary, Milwaukee and Lake Country, in the East Division, and Winnipeg, Fargo-Moorhead, Sioux Falls, Sioux City, Lincoln, and Kansas City in the West Division. The league also changed the playoff format taking the top four teams in each division into the playoffs, and allowing the team in each division with the best record to choose their first round opponent from the remaining three division teams.[15]

The American Association (AA) typically recruits college and former major and minor league players. Former affiliated-league players who get injured or have other circumstances join the AA as an opportunity to get re-signed by major league organizations. For example, David Peralta was signed in 2004 as a pitcher for the St. Louis Cardinals but suffered injuries and was released in 2009. He resurrected his career as an outfielder with teams such as the AA's Wichita Wingnuts and Amarillo Sox in 2012 and 2013, then became a starting outfielder for the Arizona Diamondbacks.

Other players include college players who were not drafted into MLB but seek the opportunity to be seen by major league scouts and possibly get signed by major league organizations. Other former MLB players join the AA as a way to stay involved in baseball after their MLB career, often as coaches and managers.

As of 2008, the salary cap for each team was $100,000, with a minimum salary of $800 per month.[16] The price of an expansion team is also about $750,000.[16] This is in stark contrast with the minor and major leagues. Former Commissioner Miles Wolff stated in an interview that "We have to pay the salaries of the players, which they don't in an affiliated [league]. It's a much riskier business. Just because of the longevity and tradition, we usually don't get the best cities, either, so some of the markets we're in are not great markets. But as I say, I think it's a better product."[16]

Rosters are limited to 25 players, with a maximum of six may be veterans and minimum of five must be rookies or LS-1. The remaining players will be designated limited service players and of those LS players only six (6) may be LS-4. Two of the LS-4 players may have LS-5 status.[18]

Rookie: A player with less than one year of service.

LS-1: A player with fewer than two years of service.

LS-2: A player with fewer than three years of service.

LS-3: A player with fewer than four years of service.

LS-4: A player with fewer than five years of service.

LS-5: A player with less than 6 years of service. 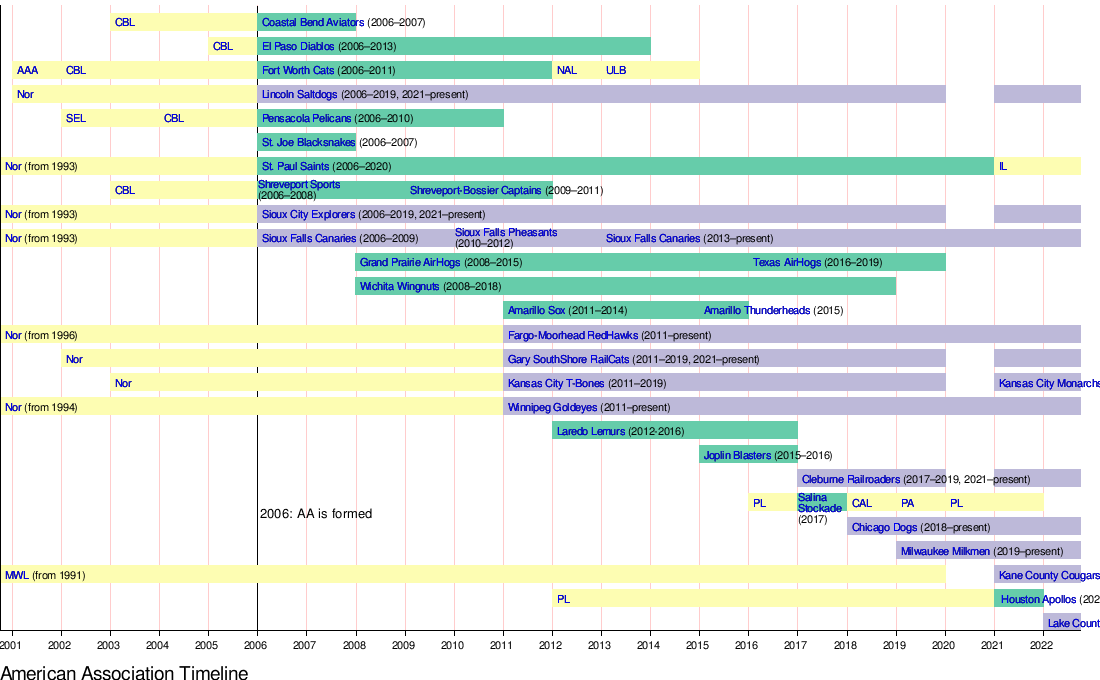