The Open Rights Group (ORG) is a UK-based organisation that works to preserve digital rights and freedoms by campaigning on digital rights issues[1] and by fostering a community of grassroots activists. It campaigns on numerous issues including mass surveillance, internet filtering and censorship, and intellectual property rights. 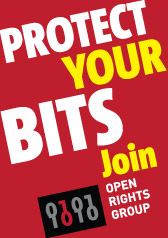 The organisation was started by Danny O'Brien, Cory Doctorow, Ian Brown, Rufus Pollock, James Cronin, Stefan Magdalinski, Louise Ferguson and Suw Charman after a panel discussion at Open Tech 2005.[2] O'Brien created a pledge on PledgeBank, placed on 23 July 2005, with a deadline of 25 December 2005: "I will create a standing order of 5 pounds per month to support an organisation that will campaign for digital rights in the UK but only if 1,000 other people will too." The pledge reached 1000 people on 29 November 2005.[3][4] The Open Rights Group was launched at a "sell-out" meeting in Soho, London.[5][6]

The group has made submissions to the All Party Internet Group (APIG) inquiry into digital rights management[7][8] and the Gowers Review of Intellectual Property.[9][10]

The group was honoured in the 2008 Privacy International Big Brother Awards alongside No2ID, Liberty, Genewatch UK and others, as a recognition of their efforts to keep state and corporate mass surveillance at bay.[11]

The group opposes measures in the draft Online Safety Bill introduced in 2021 that it sees as infringing free speech rights and online anonymity.[14][15][16]

The organisation, though focused on the impact of digital technology on the liberty of UK citizens, operates with an apparently wide range of interests within that category. Its interests include:[17][18]

ORG has a paid staff,[19] whose members include:

Advisory council and board of directors

In addition to staff members and volunteers, there is an advisory panel of over thirty members, and a Board of Directors, which oversees the group's work, staff, fundraising and policy.[23] The current board members are:

In January 2015, the Open Rights Group announced the formation of a Scottish Advisory Council which will be handling matters relating to Scottish digital rights and campaigns. The Advisory Council is made up of:

From the existing UK Advisory Council:

And from the Open Rights Group Board:

One of the first projects is to raise awareness and opposition to the Scottish Identity Database.

ORGCON was the first ever conference dedicated to digital rights in the UK,[24] marketed as "a crash course in digital rights". It was held for the first time in 2010 at City University in London and included keynote talks from Cory Doctorow, politicians and similar pressure groups including Liberty, NO2ID and Big Brother Watch. ORGCON has since been held in 2012, 2013, 2014, 2017, and 2019 where the keynote was given by Edward Snowden.