Research made available to the public 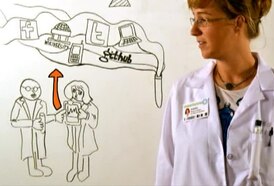 Open research is concerned with making scientific research more transparent, more collaborative and more efficient. A central aspect to it is to provide open access to scientific information, especially to the research published in scholarly journals and to the underlying data, much of which traditional science tends to hide away. Other aspects are more open forms of collaboration and engagement with a wider audience, including citizen scientists and the public at large.

Open research is research conducted in the spirit of free and open-source software. Much like open-source schemes that are built around a source code that is made public, the central theme of open research is to make clear accounts of the methodology freely available via the internet, along with any data or results extracted or derived from them. This permits a massively distributed collaboration, and one in which anyone may participate at any level of the project.

Especially if the research is scientific in nature, it is frequently referred to as open science.[1][2] Open research can also include social sciences, the humanities, mathematics, engineering and medicine.

Projects that provide open data but don't offer open collaboration are referred to as "open access" rather than open research. Providing open data is a necessary but not sufficient condition for open research, because although the data may be used by anyone, there is no requirement for subsequent research to take place openly. For example, though there have been many calls for more open collaborative research in drug discovery[3] and the open deposition of large amounts of data,[4] there are very few active, openly collaborative projects in this area.[5][6][7]

Most open research is conducted within existing research groups. Primary research data are posted which can be added to, or interpreted by, anyone who has the necessary expertise and who can therefore join the collaborative effort. Thus the "end product" of the project (which may still be subject to future expansion or modification) arises from many contributions across multiple research groups, rather than the effort of one group or individual. Open research is therefore distinct from open access in that the output of open research is prone to change with time.[10]

While first attempts towards opening research were primarily aimed at opening areas such as scientific data, methodologies, software and publications, now increasingly other artifacts of the scientific workflow are also tackled, such as scientific meta-data[23] and funding ideas.[24]

In 2013, open research became more mainstream with web based platforms such as figshare continuing to grow in terms of users and publicly available outputs.[25]

The Transparency and Openness Promotion (TOP) Committee met in 2014 to address one key element of the incentive systems: journals' procedures and policies for publication. The committee consisted of disciplinary leaders, journal editors, funding agency representatives, and disciplinary experts largely from the social and behavioral sciences. By developing shared standards for open practices across journals, the committee said it hopes to translate scientific norms and values into concrete actions and change the current incentive structures to drive researchers' behavior toward more openness.[26] The committee said it sought to produce guidelines that (a) focus on the commonalities across disciplines, and that (b) define what aspects of the research process should be made available to the community to evaluate, critique, reuse, and extend. The committee added that the guidelines aim to help improve journal policies in order to help transparency, openness, and reproducibility "become more evident in daily practice and ultimately improve the public trust in science, and science itself."[26]