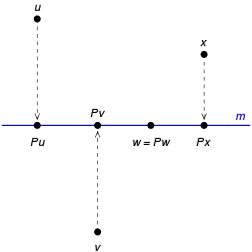 The transformation P is the orthogonal projection onto the line m.

In linear algebra and functional analysis, a projection is a linear transformation

from a vector space to itself (an endomorphism) such that

is applied twice to any vector, it gives the same result as if it were applied once (i.e.

is idempotent). It leaves its image unchanged.[1] This definition of "projection" formalizes and generalizes the idea of graphical projection. One can also consider the effect of a projection on a geometrical object by examining the effect of the projection on points in the object.

A projection on a vector space

is a linear operator

has an inner product and is complete (i.e. when

is a Hilbert space) the concept of orthogonality can be used. A projection

on a Hilbert space

is called an orthogonal projection if it satisfies

. A projection on a Hilbert space that is not orthogonal is called an oblique projection.

The eigenvalues of a projection matrix must be 0 or 1.

For example, the function which maps the point

is an orthogonal projection onto the xy-plane. This function is represented by the matrix

The action of this matrix on an arbitrary vector is

is indeed a projection, i.e.,

shows that the projection is an orthogonal projection.

A simple example of a non-orthogonal (oblique) projection is

Via matrix multiplication, one sees that

is indeed a projection.

is orthogonal if and only if 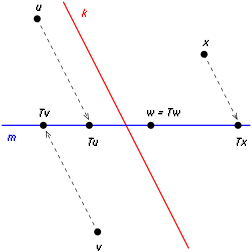 The transformation T is the projection along k onto m. The range of T is m and the null space is k.

By definition, a projection

Complementarity of image and kernel

be a finite-dimensional vector space and

be a projection on

are the image and kernel of

has the following properties:

The image and kernel of a projection are complementary, as are

is also a projection as the image and kernel of

become the kernel and image of

and vice versa. We say

is a projection along

is a projection along

In infinite-dimensional vector spaces, the spectrum of a projection is contained in

Only 0 or 1 can be an eigenvalue of a projection. This implies that an orthogonal projection

is always a positive semi-definite matrix. In general, the corresponding eigenspaces are (respectively) the kernel and range of the projection. Decomposition of a vector space into direct sums is not unique. Therefore, given a subspace

, there may be many projections whose range (or kernel) is

If a projection is nontrivial it has minimal polynomial

, which factors into distinct linear factors, and thus

When the vector space

has an inner product and is complete (is a Hilbert space) the concept of orthogonality can be used. An orthogonal projection is a projection for which the range

and the null space

are orthogonal subspaces. Thus, for every

A projection is orthogonal if and only if it is self-adjoint. Using the self-adjoint and idempotent properties of

is the inner product associated with

are orthogonal projections.[3] The other direction, namely that if

is orthogonal then it is self-adjoint, follows from

be a complete metric space with an inner product, and let

be a closed linear subspace of

(and hence complete as well).

the following set of non-negative norm-values

has an infimum, and due to the completeness of

it is a minimum. We define

as the point in

where this minimum is obtained.

. It remains to show that

and that it is linear.

was chosen as the minimum of the aforementioned set, it follows that

indeed vanishes. In particular, (for

Linearity follows from the vanishing of

By taking the difference between the equations we have

But since we may choose

(as it is itself in

An orthogonal projection is a bounded operator. This is because for every

in the vector space we have, by the Cauchy–Schwarz inequality:

For finite-dimensional complex or real vector spaces, the standard inner product can be substituted for

A simple case occurs when the orthogonal projection is onto a line. If

is a unit vector on the line, then the projection is given by the outer product

is complex-valued, the transpose in the above equation is replaced by a Hermitian transpose). This operator leaves u invariant, and it annihilates all vectors orthogonal to

, proving that it is indeed the orthogonal projection onto the line containing u.[4] A simple way to see this is to consider an arbitrary vector

as the sum of a component on the line (i.e. the projected vector we seek) and another perpendicular to it,

. Applying projection, we get

by the properties of the dot product of parallel and perpendicular vectors.

This formula can be generalized to orthogonal projections on a subspace of arbitrary dimension. Let

be an orthonormal basis of the subspace

matrix whose columns are

. Then the projection is given by:[5]

which can be rewritten as

is the partial isometry that vanishes on the orthogonal complement of

is the isometry that embeds

into the underlying vector space. The range of

is therefore the final space of

. It is also clear that

is the identity operator on

The orthonormality condition can also be dropped. If

is a (not necessarily orthonormal) basis, and

is the matrix with these vectors as columns, then the projection is:[6][7]

into the underlying vector space but is no longer an isometry in general. The matrix

is a "normalizing factor" that recovers the norm. For example, the rank-1 operator

is not a projection if

we obtain the projection

onto the subspace spanned by

In the general case, we can have an arbitrary positive definite matrix

When the range space of the projection is generated by a frame (i.e. the number of generators is greater than its dimension), the formula for the projection takes the form:

stands for the Moore–Penrose pseudoinverse. This is just one of many ways to construct the projection operator.

is a non-singular matrix and

is the null space matrix of

If the orthogonal condition is enhanced to

All these formulas also hold for complex inner product spaces, provided that the conjugate transpose is used instead of the transpose. Further details on sums of projectors can be found in Banerjee and Roy (2014).[9] Also see Banerjee (2004)[10] for application of sums of projectors in basic spherical trigonometry.

form a basis for the range of the projection, and assemble these vectors in the

. It follows that the orthogonal complement of the null space has dimension

form a basis for the orthogonal complement of the null space of the projection, and assemble these vectors in the matrix

. Then the projection is defined by

This expression generalizes the formula for orthogonal projections given above.[11][12]

Finding projection with an inner product

be a vector. One can define a projection of

where repeated indices are summed over (Einstein sum notation). The vector

can be written as an orthogonal sum such that

is sometimes denoted as

. There is a theorem in linear algebra that states that this

is the shortest distance from

and is commonly used in areas such as machine learning.

y is being projected onto the vector space V.

on a vector space of dimension

over a field is a diagonalizable matrix, since its minimal polynomial divides

, which splits into distinct linear factors. Thus there exists a basis in which

is the rank of

is the identity matrix of size

is the zero matrix of size

. If the vector space is complex and equipped with an inner product, then there is an orthonormal basis in which the matrix of P is[13]

and the real numbers

are uniquely determined. Note that

corresponds to the maximal invariant subspace on which

-blocks correspond to the oblique components.

When the underlying vector space

is a Banach space.

Many of the algebraic results discussed above survive the passage to this context. A given direct sum decomposition of

into complementary subspaces still specifies a projection, and vice versa. If

is the direct sum

, then the operator defined by

is still a projection with range

. It is also clear that

, then it is easily verified that

is also a projection. The relation

is the direct sum

However, in contrast to the finite-dimensional case, projections need not be continuous in general. If a subspace

is not closed in the norm topology, then the projection onto

is not continuous. In other words, the range of a continuous projection

gives a decomposition of

The converse holds also, with an additional assumption. Suppose

is a closed subspace of

. If there exists a closed subspace

such that X = U ⊕ V, then the projection

is continuous. This follows from the closed graph theorem. Suppose xn → x and Pxn → y. One needs to show that

, which proves the claim.

The above argument makes use of the assumption that both

are closed. In general, given a closed subspace

, there need not exist a complementary closed subspace

, although for Hilbert spaces this can always be done by taking the orthogonal complement. For Banach spaces, a one-dimensional subspace always has a closed complementary subspace. This is an immediate consequence of Hahn–Banach theorem. Let

be the linear span of

. By Hahn–Banach, there exists a bounded linear functional

, i.e. it is a projection. Boundedness of

is a closed complementary subspace of

More generally, given a map between normed vector spaces

one can analogously ask for this map to be an isometry on the orthogonal complement of the kernel: that

be an isometry (compare Partial isometry); in particular it must be onto. The case of an orthogonal projection is when W is a subspace of V. In Riemannian geometry, this is used in the definition of a Riemannian submersion.