Scott "Kidd" Poteet is an American pilot retired from the United States Air Force. He is a collaborator and friend of Jared Isaacman. He is slated for the Polaris Dawn mission for which he will be the pilot.[1]

He was born to Elizabeth Ann Poteet and Bob Poteet. His mother was a pharmacist and he has a brother named Jim.

He earned a bachelor's degree in Outdoor education at the University of New Hampshire and later attended the Air Command and Staff College.[2]

Scott Poteet is a retired United States Air Force lieutenant colonel who served 20 years in a variety of roles including commanding officer of the 64th Aggressor Squadron, pilot in Thunderbird Patrol (Position 4),[3] test and evaluation pilot, and commercial pilot. Poteet has over 3,200 flight hours on the F-16, A-4, T-38, T-37, T-3 and Alpha Jet. He logged over 400 combat hours during Operations Northern Watch ,Southern Watch, Joint Guardian, Freedom's Sentinel, and Resolute Support.

After his Air Force career, Poteet held a variety of positions, including director of business development at Draken International and vice president of strategy at Shift4. He most recently served as mission director of Inspiration4, the world's first all-civilian space mission that raised over $243 million for St. Jude Children's Research Hospital in an effort to eradicate childhood cancer. 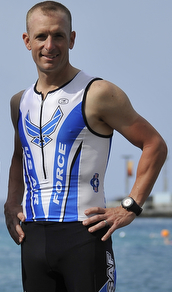 Poteet and his wife Kristen have two daughters and one son. He is an accomplished runner and triathlete, competing in 15 Ironman triathlons since 2000, including four Ironman World Championships in Kailua-Kona, Hawaii.[4]

He appears as a mission director in the docuseries Countdown: Inspiration4 Mission to Space.