Signal transmission using electronic signal processing. Transducers convert signals from other physical waveforms to electric current or voltage waveforms, which then are processed, transmitted as electromagnetic waves, received and converted by another transducer to final form. 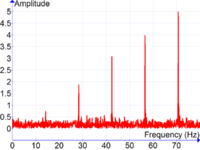 The signal on the left looks like noise, but the signal processing technique known as the Fourier transform (right) shows that it contains five well-defined frequency components.

Signal processing is an electrical engineering subfield that focuses on analysing, modifying, and synthesizing signals such as sound, images, and scientific measurements.[1] Signal processing techniques can be used to improve transmission, storage efficiency and subjective quality and to also emphasize or detect components of interest in a measured signal.[2]

In 1948, Claude Shannon wrote the influential paper "A Mathematical Theory of Communication" which was published in the Bell System Technical Journal.[4] The paper laid the groundwork for later development of information communication systems and the processing of signals for transmission.[5]

Continuous-time signal processing is for signals that vary with the change of continuous domain (without considering some individual interrupted points).

The methods of signal processing include time domain, frequency domain, and complex frequency domain. This technology mainly discusses the modeling of linear time-invariant continuous system, integral of the system's zero-state response, setting up system function and the continuous time filtering of deterministic signals

Discrete-time signal processing is for sampled signals, defined only at discrete points in time, and as such are quantized in time, but not in magnitude.

Analog discrete-time signal processing is a technology based on electronic devices such as sample and hold circuits, analog time-division multiplexers, analog delay lines and analog feedback shift registers. This technology was a predecessor of digital signal processing (see below), and is still used in advanced processing of gigahertz signals.

The concept of discrete-time signal processing also refers to a theoretical discipline that establishes a mathematical basis for digital signal processing, without taking quantization error into consideration.

Digital signal processing is the processing of digitized discrete-time sampled signals. Processing is done by general-purpose computers or by digital circuits such as ASICs, field-programmable gate arrays or specialized digital signal processors (DSP chips). Typical arithmetical operations include fixed-point and floating-point, real-valued and complex-valued, multiplication and addition. Other typical operations supported by the hardware are circular buffers and lookup tables. Examples of algorithms are the fast Fourier transform (FFT), finite impulse response (FIR) filter, Infinite impulse response (IIR) filter, and adaptive filters such as the Wiener and Kalman filters.

Nonlinear signal processing involves the analysis and processing of signals produced from nonlinear systems and can be in the time, frequency, or spatio-temporal domains.[6][7] Nonlinear systems can produce highly complex behaviors including bifurcations, chaos, harmonics, and subharmonics which cannot be produced or analyzed using linear methods.

In communication systems, signal processing may occur at: